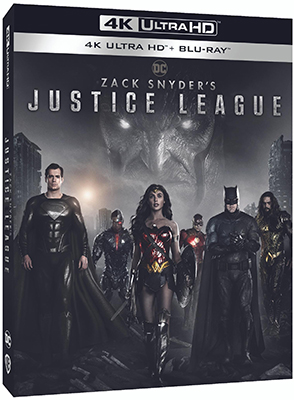 The 2017 theatrical version of Justice League foisted upon audiences was undoubtedly a compromised film, the result of a now infamous clash between creative vision and studio sensibilities.

Warner Bros., having been lapped in the superhero shared universe race several times over by rival Marvel, was looking to catch up quickly with its own DC Comics-based franchise. But the studio lost faith in director Zack Snyder, whose efforts in building the universe from the ground up — 2013’s Man of Steel and 2016’s Batman v Superman: Dawn of Justice — were met with mixed reaction at best. The studio brought in Avengers director Joss Whedon to help “guide” Snyder in completing the third installment of his trilogy, Justice League, which would see Batman and Wonder Woman recruit additional superheroes to help fight an alien invasion.

Snyder, wary of the studio’s attempts to rein him in, ultimately left the film following the death of his daughter — to whom the new longer cut is dedicated.

Whedon, under a mandate to deliver a taut, two-hour action film, re-wrote Chris Terrio’s screenplay and oversaw extensive reshoots that it is clear now were intended to bridge story points between the action scenes that Snyder had shot. Whedon, known for infusing his projects with witty banter and offbeat humor, also added levity to Justice League to the point where it was much lighter in tone compared with the world established in Snyder’s earlier films. Whedon’s version ultimately did the job of telling the story it needed to, but didn’t satisfy many viewers who had bigger expectations based on what had come before.

And thus, the “Release the Snyder Cut” movement was born, fueled by rumors that the studio was sitting on a longer version of the film turned in by Snyder before he left. While Snyder had created a rough cut of the film before most of the visual effects were completed, the so-called “Snyder Cut” of Justice League was hardly in a state to be seen by the public, and thus its release was little more than a pipe dream without a studio willing to dedicate the resources to finish an alternate cut of a film it had already wrote off.

Then came the deep pockets of HBO Max, the new streaming service from Warner’s parent company, which had not only the deep pockets to finish the Snyder Cut, but also the desire to cash in on the hype surrounding it. The cost to complete Snyder’s version was reportedly north of $70 million (the 2017 theatrical release earned $657.9 million globally against a budget that ballooned to $300 million).

The obvious parallel here is with the Richard Donner cut of Superman II, but the Snyder Cut make that project seem like a lark.

Snyder’s four-hour director’s cut of Justice League plays like a completely different film, treating the story like the epic the theatrical version showed little interest in being.

Now, admittedly, it’s unlikely that this version of the film, absent studio meddling, would have seen the inside of theaters back in the day either. For starters, a four-hour superhero movie based on Snyder’s take on the characters would have been a big ask of the audience, and he surely would have trimmed it to something in the range of two-and-a-half to three hours, just like he did with BvS (with the longer, better cut available on home video). Certainly, there are several scenes in Snyder’s Justice League that will give it a reputation for indulgence but could easily be cut for a theatrical release, but play better in a streaming format where binging serialized TV shows for six, seven, eight hours at a time (with breaks here and there) is commonplace.

Indeed, the original plan for Snyder’s Justice League was to present it as several episodes, like a TV show, but vagaries in Hollywood contract law supposedly led to the decision to deliver it as a single movie, albeit segmented into six succinctly labeled chapters and an epilogue.

Regardless, the film flows just fine even at four hours, and there is no confusion about what is happening or why the characters are motivated to do what they do. Snyder’s vision is to present the superheroes of today as the modern extension of the legends of old, drawing a direct line between classic mythology and their comic book counterparts.

The big beneficiary of all this is Ray Fisher’s Cyborg, who is given a fully fleshed out backstory that is barely touched upon in the theatrical cut, as well as a full character arc as he learns to accept and understand his powers.

Of course, if Warner had been patient enough to follow Marvel’s formula, Cyborg likely would have gotten his own origin movie before this, negating the need to devote so much screen time to it here. But that’s neither here nor there at this point.

The Snyder Cut is revelatory when compared with the Whedon Cut, which replaced a number of scenes with reshot versions that were similar but not as good, probably to add more of that Whedonesque humor. Fantastic scenes of endearing character interactions that would have added depth and meaning were removed entirely. Instead, Whedon added scenes showing a family imperiled by Steppenwolf’s plan who had to be saved by the League in the final battle. There’s no distracting family in the Snyder Cut, which instead takes the opportunity to foreshadow storylines that were intended for future sequels.

Another change Snyder made was reverting to the musical score by Tom Holkenborg, who continues the musical style established in Snyder’s previous entries. Whedon had replaced it with a more conventional but still serviceable score by Danny Elfman, who reused a number of more iconic themes for the characters from earlier franchises that played on audience nostalgia for the characters as a way to shortcut any development of them as specific to the Snyderverse.

Also, since he’s using his original footage and ignoring the reshoots, Snyder didn’t have to use digital effects to remove the mustache Henry Cavill couldn’t shave off while filming Mission: Impossible — Fallout, famously leading to his awkward-looking mouth in the 2017 version.

Another advantage Snyder’s cut has is that we’ve gotten to explore the DC universe a bit more since 2017, most notably with the 2018 Aquaman movie that really fleshed out Jason Momoa’s character and backstory, and gels nicely with his development here.

Snyder also took the opportunity to fix his presentation of the films’ villains. The CGI for the primary antagonist, Steppenwolf, has been reworked to be much more menacing and looks a lot better. Snyder also gives the audience a chance to see Darkseid, the legendary DC comics warlord who serves as Steppenwolf’s master and was reduced to just one mention of his name in Whedon’s cut.

Steppenwolf’s plan, as in the theatrical cut, is to collect the three “Mother Boxes” on Earth that when united will allow him to re-create Darkseid’s homeworld of Apokolips on Earth. The Mother Boxes were left behind when Darkseid’s first invasion of Earth was repelled thousands of years earlier, and thought lost until Superman’s death at the end of BvS caused them to reactivate, drawing Steppenwolf to them.

We also get an expansion of the nightmare future hinted at in BvS, in which Batman leads a rebellion against a Superman who has become a tyrant ruling over the wasteland Earth has become as a result of Darkseid’s invasion. This particularly impacts the scene of Superman’s resurrection, which plays very differently now that we have the expanded context behind it. Rather than Superman’s revival serving as another plot device in the battle against Steppenwolf, here it is re-framed as a complex ethical question about whether bringing Superman back to life in order to win the battle of today will ultimately lead to the very dystopia his resurrection is meant to prevent — and whether Batman’s desire to atone for his guilt over Superman’s death in BvS is blinding him to this potential outcome.

Snyder presents his version in the 4:3 format most viewers will associate with the standard square ratio of classic non-widescreen TVs. That means vertical black bars to the right and left of the movie. While this might look odd to viewers accustomed to widescreen, Snyder’s framing actually presents more of the image as originally filmed. The square frame was chosen with Imax exhibitions in mind, since true Imax screens are higher than a typical theater. A standard “widescreen” print of the film is then made by cropping from the top and bottom of the picture. By eschewing this process, Snyder is instead offering us everything in the frame he shot.

Time will tell if we get any follow-ups to plot points developed in Snyder’s Cut that otherwise fell by the wayside in Warner’s DC universe. But even if we don’t the complete Snyder Cut on its own is a triumph of a filmmaker’s singular vision, and the story surrounding it a fascinating glimpse into the process of the Hollywood machine and the often-conflicting instincts of those in charge of it.

The 4K Ultra HD and Blu-ray Disc versions offer the film spread over two discs. The first disc of both the 4K and regular Blu-ray versions contains the set’s lone extra: a 24-minute featurette of Snyder reflecting on his experience making his trilogy of superhero movies, and the fan effort to bring it to fruition with his vision of Justice League.

Also, the discs do not include a code for a digital copy of the film, so the digital version remains exclusive to HBO Max. The disc does include an insert with an ad touting HBO Max and the black-and-white version of the movie, Zack Snyder’s Justice League: Justice Is Gray.