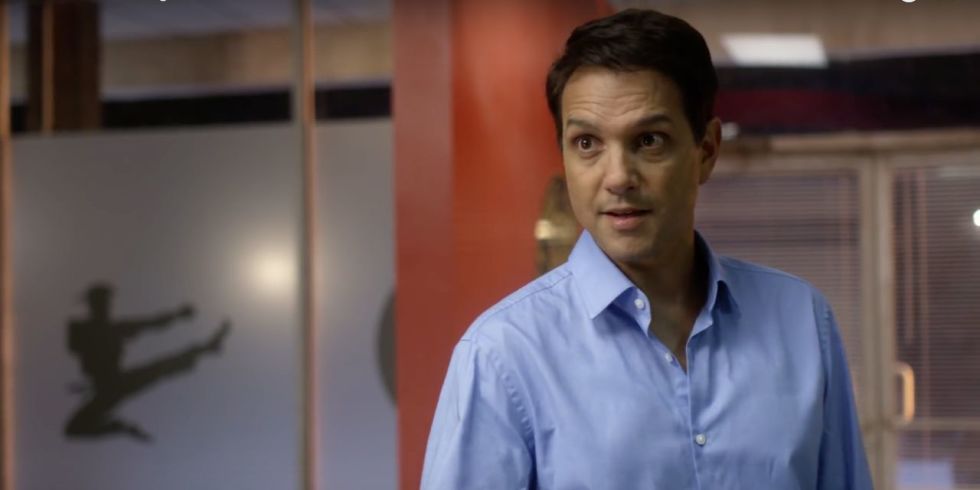 Ralph Macchio, who appeared in the original 1984 The Karate Kid, returns in the new YouTube Red reboot, "Cobra Kai."

YouTube Red took the top spot on the digital originals chart the week ended May 12 with “Cobra Kai,” according to Parrot Analytics Demand Expressions data.

“Cobra Kai,” a sequel series to the classic The Karate Kid movie, shot up to No. 1 with a whopping 154% increase in demand from the prior week, when it debuted in the top 10 at No. 6.

Demand for “Cobra Kai” was so great that it also popped up at No. 5 on the overall TV shows chart – ahead of even “The Game of Thrones.”

YouTube Red’s 10-episode first season of “Cobra Kai” debuted on May 2. On May 10, YouTube revealed that it was renewing the show for a second season.

The series relies heavily on nostalgia, blending in new characters with William Zabka and Ralph Macchio, holdovers from the original 1984 The Karate Kid movie. The series picks up 30 years after the events of the original film. Like the first, the second season will contain 10 30-minute episodes, and will debut on YouTube Red sometime in 2019. The first episode of “Cobra Kai” had 11 million views, three days after it premiered – and by May 14, it had racked up over 26 million views.

Elsewhere on the chart, Netflix titles also performed well. “13 Reasons Why,” No. 1 the previous week, continued to gain in demand, with a 43.4% spike to 40.2 million Demand Expressions on the back of the May 8 release of season two’s full-length trailer. But given the over-the-top performance of “Cobra Kai,” “13 Reasons” slipped to No. 2 on the digital originals chart.

Both “Arrested Development” (No. 3) and “Dear White People” (No. 6) posted impressive gains in demand as well, jumping up the chart by seven and 19 spots, respectively, over the last week. In both cases, new episodes are coming in May.

Demand for “The Handmaid’s Tale” has been remarkably steady been steady, with the dystopian series slipping to No. 4 from No. 3 the prior week despite a modest 5.7% gain in demand, week over week. 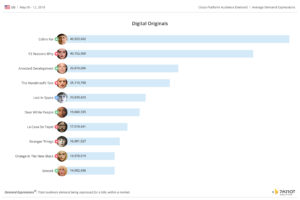