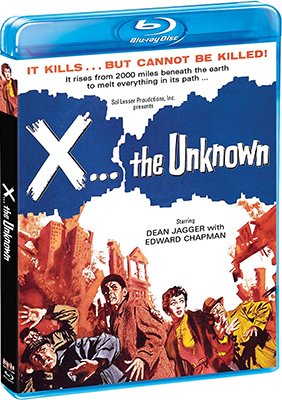 Despite what looks like a glorified Ed Wood budget that’s mercifully camouflaged by a lot of nocturnal outdoor shots and a generally zippy pace, X … the Unknown is an affectionally regarded member of the Hammer Films family that’s sometimes mistaken for one of that studio’s “Quatermass” pictures. This is understandable because X, too, deals with the threatening onset of some hitherto unknown-to-man affliction, supernatural pestilence or, more specifically in this case, highly visual creepy cruds.

I didn’t see this unexpected Dean Jagger starrer when it hit the U.S. in ’57, though my best friend did and gave me the enticing-to-a-kid plot rundown, but I did see the previews for it a couple times — which typical of black-and-white genre pictures of the day whose coming attractions always got under your skin (or at least they did mine). It would go like this: A neighborhood or small-town theater would divide its week’s playdates into sections: maybe a color big-star vehicle Sunday-to-Tuesday and an ‘A’ Western on Friday-Saturday. Sandwiched in between midweek, however, would be these frequently socially disreputable cheaper entries whose theatrical trailers often seemed to be rendered via prints that looked and sounded more worn than those for the weekend attractions. Whether they were tawdry crime melodramas or frugally filmed sci-fi, they seemed less a product of Hollywood spectacle than of moving-image versions of the photos I used to look at in from the pile of Police Gazettes my barber had stacked on  the floor as I waited to get a buzzcut.

Of course, X wasn’t Hollywood product even from its inception but a 1956 British film that Warner Bros. picked up for U.S. distribution the following year after its intended stateside conduit RKO hit the permanent skids. The casting of American character actor Jagger (who’d won a supporting Oscar for Twelve O’Clock High) was a surprise, but in a very happy coincidence, Jagger had more than a passing physical and stylistic resemblance to Dr. Frank Baxter, who was already a huge Boomer grandfather-figure. Baxter was the warm, beloved non-scientist who played one on TV (his character name was “Dr. Research”) in the network broadcasts of those wonderful Frank Capra science documentaries produced in conjunction with Bell Telephone. The two that everyone remembers — Our Mr. Sun and Hemo the Magnificent — had already run by the time X hit U.S. screens, and I have to believe that more than a few kids of the day made this “good will” connection, however subliminally, (Later, 16mm prints of these were run for years in junior high classes whenever science teachers wanted to take a day off, which is not to shortchange their value).

Back to the glop, which we don’t really see is glop until much later in the movie, which takes place in Scotland. Jagger, employed by the Lochmouth branch of the Atomic Energy Commission, is called in after soldiers on a routine Geiger counter assignment to locate the source of supposedly modest radioactivity turns into a disaster. Water starts to bubble and boil at the marshy point of origin, followed by an explosion that kills one of the soldiers from radiation and leaves another with a back of truly grisly-looking blisters. Jagger isn’t helped very much in these endeavors by an unsympathetic superior (Edward Chapman) who’s tone deaf when it comes to gauging the possible severity of the situation. In the annals of big-screen portrayals of bankrupt management, this one is right up there.

To borrow a term once employed by Alexander Haig, this “sinister force” soon branches out in its choice of victims — including even a staff scientist who’s trying to steal a quickie with a nurse in the radiation lab and ends up seeing God, all right, but not in the usual good sense. Whatever this radioactive matter is, it can bore its way through fortress-like constructions, though this matters little at the outdoor point of origin that the soldiers are still guarding despite doing what you or I would do: go AWOL. One of these gents is played by a young Anthony Newley, back before he started writing too many lousy songs.

Here, back at the marshes, he ought to be singing “What Kind of Fool Am I?” (whose Newley co-authorship admittedly can’t be denied).

There’s also a young Leo McKern, an actor most are used to seeing with a bit more weathering, as in A Man for All Seasons, where he played Thomas Cromwell, or the Beatles’ Help! (now, there’s a double feature). Here, he’s the security officer for the U.K.’s branch of the Commission but also the Everyman stand-in for us whenever Jagger advances explanatory scientific hypotheses that even he has to concede represent some flailing on his part. McKern, who leans toward Jagger’s POV, such as it is, is still caught in a kind of tug-o-war because honcho Chapman is so recalcitrant to give these concerns the time of day until the ooze starts flowing.

Without giving away the game, let’s just say that “X” suddenly manifests itself in a more recognizable form, at least if you’re a fan of The Blob — though the latter didn’t come out for another year. Imagine being able to say on your resumé that one of your creations anticipated the young Steve McQueen’s notable box office sleeper-dom for which he infamously took a modest flat salary in lieu of an also offered percentage of the gate. In this case the brains behind X was screenwriter Jimmy Sangster, the most revered of the Hammer nucleus of talents who made the organization “go.” Sangster is the predominant subject of the Blu-ray’s bonus featurette about the original Hammer gang, not only for his ability to pull off a cheapie like this one but for his exceptionally expressive color horror films of which Dracula (aka Horror of Dracula) is probably the most revered.

This mini-doc is quite informative and entertaining and doesn’t shy away from discussing Sanger’s roving eye (Hammer films employed so many babes that they once rated their own coffee table book). The other featurette is pretty hopeless, though: a slapdash jumble of film clips in which the music drowns out a huge percentage of what narrator Oliver Reed is trying to say, a boo-boo I don’t believe I’ve ever seen replicated since the New York  roadshow engagement of Heaven’s Gate in 1980 (in that case, the culprit was the sound mix) and never in a documentary. Reed died in 1999, so it also has some mold on it — or perhaps a glob of “X.”

The movie’s low-budget black-and-white in a frequently nighttime backdrop makes this stuff look more effectively imposing than it otherwise might have. Still, the movie gets some extra kick from a new mastering even if it originally only cost about $60,000 total. And of this, possibly more than we think went to the then fairly ubiquitous Jagger, who in 1957 also worked with Pat Boone and Samuel Fuller, though unfortunately not in the same film.