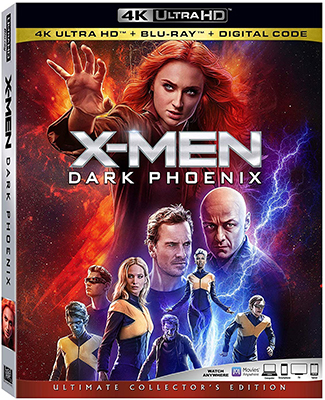 With Dark Phoenix, the Fox era of “X-Men” movies comes to an end not with a bang, but with a whimper.

Of course, looking back at the franchise, while it has left its mark on the landscape of superhero cinema, the films have never really been the most consistent in terms of quality. And a lot of that might owe to the filmmakers’ dubious relationship with not just the source material, but the other films in the franchise as well.

Some have been standouts — X2, Days of Future Past, Deadpool and Logan being the biggest highlights on most lists — and some, such as X-Men Origins: Wolverine, were forgettable enough that even the film that used time travel to reset the timeline ignored it.

Going in, the 12th “X-Men” movie, Dark Phoenix, had a few factors to overcome. It would be following up the disappointing X-Men: Apocalypse with a first-time director, Simon Kinberg, albeit someone who was at least familiar with the franchise having written several of the previous films. And it would be coming out amid Disney’s takeover of the Fox studio, meaning that future “X-Men” movies would likely come from the Marvel Cinematic Universe and feature a whole new cast and creative team and have nothing to do with the Fox movies. That lack of a narrative future combined with the release date for Dark Phoenix getting pushed back further and further left an impression that it was more of a remnant of a bygone era than an entry audiences could really care about.

In that regard, at least it made it to theaters. Fox also left over a New Mutants film that still needs a final polish if it is to ever see the light of day.

Even so, the signs are evident within Dark Phoenix of a franchise on its last legs even without the intrigue of inter-studio transition (much of this carrying over from Apocalypse).

For his part, Kinberg wanted a second chance to take on the “Dark Phoenix Saga,” one of the most famous “X-Men” storylines from the comics, and one that was adapted somewhat in 2006’s X-Men: The Last Stand, which Kinberg co-wrote. But where it was just one of several storylines serving that muddied third “X-Men” movie, the reboot that came with Days of Future Past would allow Kinberg to spend an entire movie on it.

Dark Phoenix also picks up the tradition begun in 2011’s First Class of setting subsequent “X-Men” movies in a new decade. So the action picks up in 1992, nine years after the events of Apocalypse. Now seen by the world as heroes, the X-Men conduct a mission to rescue a space shuttle crew from a mysterious space cloud, which ends up being absorbed by Jean Grey (Sophie Turner).

The power contained within the cloud ends up unlocking hidden secrets involving Jean, which puts her at odds with Charles Xavier (James McAvoy) and the rest of the X-Men. As she sets out on her own, she is pursued by an alien leader (Jessica Chastain) who wants the power for herself.

So in that description lies the elements for a big, sprawling epic — space adventure, mysterious superpowers, alien invasions. And yet, instead of going big, Kinberg chooses to go small, trimming the potential for more world-building in favor of focusing on Jean’s personal struggles to deal with her new abilities and what that means to Charles. And the aliens are treated as little more than another nuisance for the mutants to handle, rather than the film realizing that this is the first time these films have had to deal with cosmic matters.

This could have been the Avengers: Endgame of Fox’s “X-Men” franchise, but its scope is so limited it ends up feeling more like a direct-to-video sequel.

According to Kinberg in both the feature-length commentary and several behind-the-scenes featurettes, this was by design, as the constraints of a psychological drama more more appealing to the kind of director he wanted to be. So while it’s very much the film he wanted to make, and any director would still have had his script as a starting point, the question of whether his directorial sensibilities were the right fit will always loom over the final product. (And, to be fair, the question of who else they could have gotten to direct also is fair, especially considering how much of a Hollywood pariah franchise stalwart Bryan Singer turned out to be.)

A couple of other factors contribute to the film’s sense of disconnect from the rest of the franchise. First, despite the time jump from the previous film, there is very little sense of character development in the interim. The team is the same as it was at the end of the previous movie, and any new characters are reduced to little more than fan service cameos (a complaint that could be lodged against a number of the previous movies too). Kinberg in one of the featurettes mentions thinking of this film as more of a reboot with the same cast, rather than a continuation of previously established plot threads. This isn’t the first time this kind of approach seems to have been applied to the “X” movies, as numerous potential story points and character relationships are hinted at only to be ignored later, it does seem more in force with Dark Phoenix, which is a shame.

And while musical consistency has never been a strength of this franchise, the previous “X” movies at least demonstrated a musical progression through the themes that composer John Ottman originally introduced in X2. All of that is abandoned here though in favor of the generic synth tones of Hans Zimmer and his musical score factory. It serves Kinberg’s low-key approach but does nothing for sparking the sense of nostalgia this film could have used to send this particular iteration of the franchise out on a higher note.

Of course, getting pushed to a summer release date didn’t do Dark Phoenix any favors, as it simply invited comparisons to Endgame, which traded heavily on its sense of nostalgia for the characters, especially in how it presented the music for them.

The important lesson here is that in adapting a particular comic book storyline into a long-running series (films or TV), is that the ongoing storylines should be serviced by, not sacrificed to the adaptation. The movie, show or franchise still needs to stand on its own, and the best adaptations are able to appease both longtime fans of the material and new viewers unfamiliar with it, often by adhering to the spirit of the work if not a literal re-creation of it.

That doesn’t mean Dark Phoenix is unwatchable. Just the notion of revisiting the “Dark Phoenix Saga” makes the film a curio, if only to compare it to The Last Stand. And make no mistake, there are quite a few echoes of that previous film here.

In addition, there are plenty of dazzling visual effects when the film bothers with them, and the film looks great, particularly during the shuttle rescue sequence.

And it’s still good to see the cast return, even if the story isn’t quite sure how best to utilize them. Ultimately, the film does provide enough of a sense of closure to the Fox era, particularly the four films of the “First Class” continuity.

The Blu-ray is also fascinating in how the bonus materials demonstrate the clear disconnect between how the film unfolds in the filmmakers’ minds, and what it ended up being.

In addition to Kinberg’s commentary (shared with producer Hutch Parker), the Blu-ray also includes three-and-a-half minutes of deleted scenes that mostly offer redundant information to what’s established in the film, but also provide an alternate ending of sorts.

The centerpiece of the extras is the five-part documentary “Rise of the Phoenix: The Making of Dark Phoenix,” which runs about 81 minutes in total and offers a comprehensive view of the production. Supplementing it is a 13-minute scene-breakdown of the creation of a battle on New York’s 5th Avenue (re-created on a stage in Montreal).

Rounding out the package is a lighthearted two-minute video of Beast (Nicholas Hoult) teaching viewers how to fly the X-Jet.