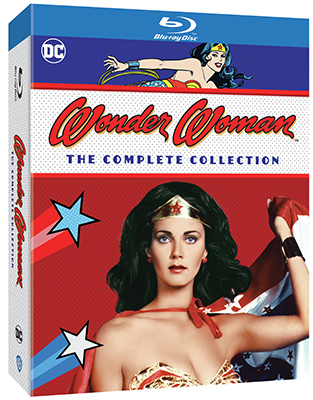 To speak of the 1970s “Wonder Woman” TV series immediately brings to mind Lynda Carter’s portrayal of the title character, which became so iconic that she is indelibly compared with any subsequent depictions of the DC Comics heroine. That’s a fortunate legacy for a series to have, as over time the fondness for her in the role seems to have overwhelmed the collective memory over specifics of the series, which is unmistakably a product of its decade.

The series was undoubtedly hampered by a haphazard production schedule in which the series’ format was constantly tinkered with. It began with a 1975 TV movie that more or less recounts Wonder Woman’s classic comic book origin: she becomes an emissary from the Amazon women to the United States after pilot Steve Trevor (Lyle Waggoner) crashes his plane into the hidden Paradise Island during World War II.

The subsequent 13-episode first season of the series, which aired on ABC from 1976 to 1977, maintained the period setting, with Wonder Woman in her alter ego of Diana Prince serving as Trevor’s yeoman at the War Department and assisting him in thwarting a ridiculous new Nazi plot each week.

After the first season, the show switched from ABC to CBS and was retooled to a modern-day setting, taking on the name “The New Adventures of Wonder Woman.” Fittingly, the first episode of season two is like a second pilot, as an envoy of secret agents led by Trevor’s son (also played by Waggoner) accidentally wanders into Paradise Island airspace. The Amazons learn that, 30 years after the defeat of the Nazis, that the world is plagued by a vague underground group of criminals seeking global domination, and send Wonder Woman back to America to keep an eye on things.

Thus, the second and third seasons find Diana rising up the ranks of a spy agency in Washington, D.C., foiling some goofy criminal plots, such as infiltrating a health spa whose owners are hypnotizing politicians’ wives into leaking government secrets, or investigating a comic book convention to find jewel thieves, or stopping mad scientists from cloning Adolf Hitler. With Diana subtly battling sexism while encouraging the male gaze, the influences of “Charlie’s Angels” and “Mission: Impossible” on the series’ writers are obvious.

Over time the trappings of the fictional spy agency became sillier, such as with the introduction of a little roving robot messenger that scampers around the office, the show’s version of R2-D2 of the recently released Star Wars, or K-9 from “Doctor Who,” another genre show with a very similar tone as “Wonder Woman.”

By the end of the third season, the show was retooled again to relocate Diana to Los Angeles. In addition to a new boss, her work as a secret agent would have been aided by a man genetically engineered to be indestructible, as well as a super-powered chimpanzee, plus a kid who kept sneaking into the office to sell the agents overpriced food and other knick-knacks. The “Arrowverse” it wasn’t.

Mercifully, the show was canceled so CBS could make room for “The Dukes of Hazzard” on the schedule.

It should be noted that the two-parter that ended up as the series finale was aired out of order, as it takes place before the L.A. episode. The airdate order is preserved on the Blu-ray.

Another fun aspect to the series from a historical perspective is spotting a lot of recognizable faces of performers who would go on to bigger things. Of particular note in this regard is a young Debra Winger, who appeared in three first-season episodes as Drusilla, Diana’s younger sister who assists her as Wonder Girl.

Their mother, the queen of the Amazons, would end up being played throughout the run of the show by three different actresses, two of them Oscar winners: Cloris Leachman (Best Supporting Actress for 1971’s The Last Picture Show) in the TV movie pilot, Carolyn Jones in the first season, and Beatrice Straight (Best Supporting Actress for a five-minute scene in Network a few years prior) in the CBS years.

Jones, best known as Morticia in the 1960s “The Addams Family” TV series, also appeared in a handful of episodes of the campy but classic Adam West “Batman.” Likewise, keep an eye out for Frank Gorshin, who played The Riddler on “Batman,” as an old toymaker who creates an android duplicate of WW.

But the highlight of the series is definitely Carter, who quickly settles into the role and ably anchors the series throughout its many changes. Notice how quickly she adapts to performing Diana’s iconic spin to transform into Wonder Woman, a time-saving costume change invented by the show that has become a trait of the character in subsequent portrayals. Carter eventually perfects the spin into a graceful maneuver. Compare her twirls with Winger, who seems rather ungraceful in her spins to transform into Wonder Girl, since she didn’t get much chance to practice having appeared only in a handful of episodes.

With the introduction of the twirl as Diana’s quick-change method of choice, it’s interesting to see how the series develops rules for her powers. While the initial implication is that her powers stem from her Amazonian heritage, the second season retcons this a bit by suggesting she has no powers off the island without her magic costume on. Given how minimal the suit is, it makes one wonder why she doesn’t wear it under her clothes just to be safe. (Or maybe she does, given that she still tosses grown men across the room in a few episodes while still in her Diana garb).

The series also stretches the credulity of no one figuring out that Diana is Wonder Woman, her disguise of a pair of glasses apparently as effective for her as it was for Clark Kent. Somehow the ruse holds up even after Wonder Girl arrives at the same time as Diana’s sister, with both being the same size and neither wearing a mask. (In a recurring gag, the agency supercomputer seems to have figured it out, though.)

This new Blu-ray compilation of the pilot movie and 59 episodes provides a nice restoration of the series given the source materials that must have been available, and production values that varied widely in quality, from mismatched stock footage, obvious edits to hide stunts, and visual effects that, while adequate for television in the 1970s, are a bit rough in retrospect.

Wonder Woman’s invisible plane, for example, is very obviously a model of a clear plastic airplane with a doll in it.

Indeed, very little is hidden in HD, and viewers will get the occasional peek of the edge of the soundstage in some shots.

Another gimmick of the series was the use of comic-book like title cards that pop up on the screen to explain transitions, though these are often riddled with typos and misspellings (such as Carribean instead of Caribbean in the first episode).

One episode, meant to take place in Hollywood in the 1940s, establishes the setting by using stock footage that switches from black and white to color as it tries to be period appropriate. Switching from WWII to a contemporary setting must have cleaned up a lot of production headaches for the producers, not to mention saved the network a pretty penny.

In some ways, though, the show may have been ahead of its time, exhibiting a scope and ambition limited curtailed by the logistics of television production. Despite these potential obstacles, Warner has done a great job cleaning up the show for high-def. The colors really pop and the 1970s of it all is part of the charm.

While the Blu-ray set includes a booklet with an episode guide arranged by season, it doesn’t indicate which episodes are on which disc, which can be annoying.

The Blu-ray also carries over the extras from the previous DVD season sets released in the early 2000s, without any new material.

These include a couple of episode commentaries, and a retrospective featurette for each season, which are presented in standard-definition.

For season one it’s the 21-minute “Beauty, Brawn and Bulletproof Bracelets: A Wonder Woman Retrospective”; season two has the 11-minute “Revolutionizing a Classic: From Comic Book to Television”; and season three offers the 14-minute “Wonder Woman: The Ultimate Feminist Icon.” All of which are self-explanatory given their titles, but are fun to watch nonetheless.

The old commentaries also are interesting to listen to, especially when Carter begins speculating on how a future movie might deal with the character. This is years before Gal Gadot took on the role for the big screen, though one gets the sense that Carter hasn’t given up the notion of playing her again, either.