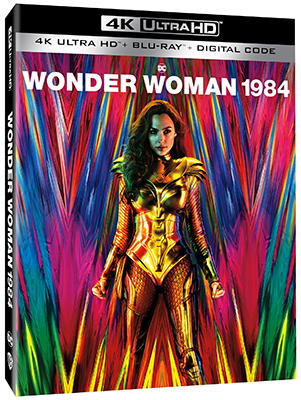 The 2017 Wonder Woman movie is pretty commonly regarded as the best of the otherwise mediocre DC Comics shared movie universe. The sequel might have some fans wondering if the first one was a fluke.

Probably not. But while Wonder Woman 1984 unmistakably shares the DNA of the original, it certainly isn’t a retread.

Taking place in a stereotypical movie version of 1984, 65 years after the World War I setting of the first one, the film finds the ageless Diana (Gal Gadot) now working in the antiquities wing of the Smithsonian while going out as Wonder Woman on a lark to stop local crimes. One, a jewelry heist, uncovers a black market smuggling ring that brings Diana into contact with an ancient stone inscribed with the power to grant wishes by an ancient trickster god of lies (one who isn’t Loki, since he plays for the other team).

Diana’s wish is for the return of her lost love Steve Trevor (Chris Pine), and sure enough he pops up in a way that raises some questions the movie isn’t interested in answering.

However, the stone attracts the attention of Maxwell Lord (Pedro Pascal), a con man selling shares in a phony oil company. He wants the power to wish himself into greatness, but as we are told in a flashback prologue set during Diana’s time as a young girl participating in the Amazonian sports of Themiscyra, “greatness is not what you think.”

Diana’s attempts to stop him put her at odds with a co-worker named Barbara Minerva (Kristen Wiig), a wallflower whose wish to be more like Diana inadvertently imbues her with superpowers she’s now unwilling to give up on her path to becoming the supervillain Cheetah. However, tying such a seminal Wonder Woman villain’s origins to this story almost seems like a waste.

On the flip side, Diana discovers the price of her wish is the gradual decline of her own abilities, and as the wishing power spreads, plunging the world into chaos, she is forced to make the difficult decision most movie superheroes have to make at some point: love or duty.

The film is visually dazzling and offers some moments that will make any superhero movie fan smile, and Wonder Woman fans in particular. For example, the film finds a neat way to work in the invisible jet that isn’t just a transparent plastic model with a doll in it.

But the film runs a bit long at two-and-a-half hours, and the over-reliance on wishes as the central plot device gets rather tedious after a while.

Even in a universe where magic is already established — Diana is the daughter of the Greek god Zeus, after all — the presentation of the wishes being granted just seems a step beyond the plausible since the movie only pays the slightest lip-service to how they are supposed to work. In a screenplay underlined by progressive misunderstandings of Reagan-era politics, the wishes serve whatever basic story points the writers require, and stand up to little scrutiny beyond that.

Which is all a means of saying the individual elements of the story as assembled don’t quite result in a completely satisfying whole. The two-villain team up is practically a superhero sequel tradition at this point, even when their pairing doesn’t seem to make sense. Tonally this type of plot wouldn’t seem too out of place in the 1970s “Wonder Woman” TV show (which, fittingly, is teased in the Blu-ray bonus materials).

The 1980s setting would seem to suggest the story is intended as a screed against the kind of selfishness and greed that are often attributed to the ’80s but are pretty universally present in any time period. But, really, the film’s message of honest work over shortcuts to achievement, and not expecting everything you want to just be handed to you, is an easy one to embrace.

Since we’ve seen present-day Diana in Batman v Superman and Justice League, a sequel set before those films could have been a story about what brought her back to dabble in superheroism before retreating from humanity’s problems again before BvS. As it stands, WW84 doesn’t necessarily knock against the established DC movie timeline per se, but the two “Wonder Woman” movies definitely stand on their own apart from the greater franchise.

It’s especially hard to reconcile the plot of WW84 with the 2017 Justice League team-up movie, particularly the theatrical cut. It fits in a bit more with Zack Snyder’s Justice League director’s cut, but not by much. (One can only imagine what a teenage Bruce Wayne would have wished for.)

While some of its logical issues are hard to ignore, Wonder Woman 1984 does play better on multiple viewings, mostly because it’s easy enough with Blu-ray and digital copies to just go to the few good scenes. And really, whatever problems the movie has are almost an afterthought to the pure joy of a mid-credits cameo that should serve as the basis of a third film. 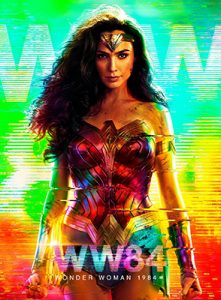 Wonder Woman 1984 played in theaters and streamed on HBO Max through Jan. 24, after which it was available exclusively in theaters until hitting PVOD a month before its traditional home video run.

The Blu-ray edition of Warner’s latest “Wonder Woman” adventure includes more than 90 minutes of bonus materials, consisting of a number of detailed behind-the-scenes featurettes and a few fun extras for the fans.

The best is the aforementioned 1970s tie-in, presenting footage from WW84 in the style of the 1970s “Wonder Woman” TV series, complete with the original theme song and animated transitions — and it’s also the first time we get to see Gadot do the classic “Wonder Woman spin.”

Among the other amusing extras are a six-and-a-half-minute gag reel and the raw minute-and-a-half footage from Max Lord’s in-movie “Black Gold” infomercial.

A couple more focus on the teaming of Gadot and Wiig: There’s a five-minute video about them starring together, which leads to a minute-long clip of the pair goofing around on set in the form of a “Saturday Night Live”-style video sketch (no doubt Wiig’s comedy background contributed to this one).

The primary making-of documentary runs 36 minutes and gives a good overview of the production. Tying into this are two “Scene Study” featurettes: a five-minute video focused on the opening mall rescue scene and six-minutes exploring the Middle East truck chase. The most notable aspect to these videos is how dedicated the crew was to re-creating the 1980s — building out several levels of a vintage mall with fully stocked stores, and using old-school practical stunt-work with a minimal reliance on CGI.

The rest of the footage deals with the making of the scenes at the amazonian island. There’s a 21-minute “Meet the Amazons” virtual panel from DC Fandome featuring discussions with director Patty Jenkins and a number of the women and stunt performers who played Amazonian warriors participating in the elaborate games sequences that open the film. Rounding out the presentation is an 11-minute profile of actress Lilly Aspell, who reprises her role as the pre-teen Diana from the 2017 film. The featurette includes some cute audition footage of the enthusiastic Aspell from 2015, showing off how well she makes for a younger version of Gadot.