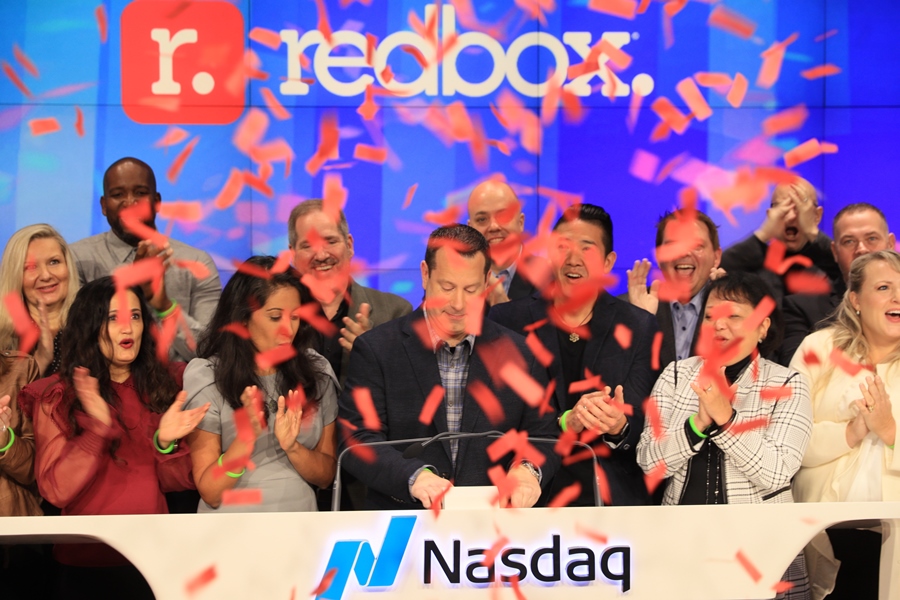 “It was amazing, it was a huge highlight,” Smith told Media Play News in an interview shortly after the ceremony. “This is something I’ve wanted to do for years. I started working on taking Redbox public back when I was a banker in 2008, so to be actually here and doing this feels like a truly incredible day.”

Rather than going the long and tedious IPO route, Redbox became Redbox Entertainment Inc. — with its common stock and warrants trading under the ticker symbols “RDBX” and “RDBXW,” respectively — through a merger with Seaport Global Acquisition Corp., a publicly traded special purpose acquisition company.

“We felt it was going to be the most efficient way to bring the company to market,” Smith said. “Our business is in transition, moving from physical only to multi-channel and multi-platform, so it allowed us to have a platform to really tell our story.”

The story, of course, is a digital transformation to bulk up Redbox’s digital offerings — digital movie sales and rentals; free live TV, both on demand and ad-supported; and, down the road, selling subscriptions to streaming services — while using the company’s more than 40,000 disc-rental kiosks as a marketing tool to further facilitate the consumer transition from physical to digital.

“We have this incredible business with a very loyal customer base that absolutely loves movies,” Smith said. “They still love renting movies at our kiosks, but as we know consumers are shifting to digital, and we want to create an opportunity for them to make it easy by having all those opportunities in one place — free live TV, TVOD, and on demand — and then as part of this transition we’re going through we also will be adding subscription channels.

“And then you have this single plane of glass, a single window, with single billing, that makes it incredibly easy for consumers to access all of this entertainment. And having this incredible billboard through our kiosks creates an amazing opportunity that really allows us to serve our customer base.”

Redbox’s digital transformation, ambitious as it might be, is fully on track, Smith said. “We’re making a lot of progress,” he said. “We’ve set some important goals and objectives, and we keep running and chasing after that. We’re pleased with the momentum, but we think there’s a huge opportunity and we want to seize that opportunity. We still have a long way to go.”

Redbox’s over-arching goal, Smith said, is to create a one-stop destination for entertainment. “And we’re going to get there by constantly bringing in more titles for ad-supported free live TV, as well as more channels — we’d love to get 200 or so channels; continuing to expand the functionality of TVOD; and, with subscriptions, it’s really important for us to get those deals done and make that content available to consumers.”

Through the business combination with Seaport Global, Smith said, Redbox raised nearly $90 million in cash. “Part of it went to pay down debt, and the other part we’re investing in the business, in four key areas,” he said. “First, we’re building up our channels platform. Second, we’re leaning into advertising. Right now we have this really creative program with Roku selling discounted bundles for Redbox digital. You get that when you buy a Roku streaming device at Walmart. Third, we’re going to license more content for our ad-supported service, both on demand and free live TV. And then we’re going to continue to build up Redbox Entertainment, the titles we’ve been distributing — we’re going to bring in more and more of those.”