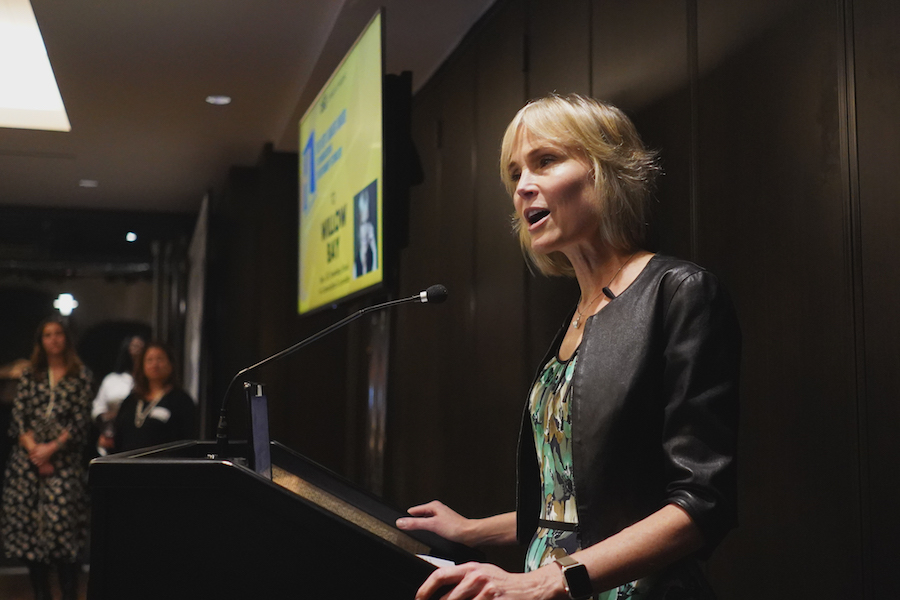 Willow Bay, dean of the USC Annenberg School for Communication and Journalism, received the third annual “Hedy Lamarr Award for Innovation in Entertainment Technology” from DEG: The Digital Entertainment Group Nov. 12 on the Sony lot in Culver City, Calif.

Presenter Robin Tarufelli, managing director of Deloitte and chair of the DEG’s Canon Club, noted that “Dean Bay is widely known for her journalism work on camera as a reporter and anchor at various news agencies, including ABC’s ‘Good Morning America,’ NBC’s ‘Today Show’ and CNN’s ‘Moneyline.’”

She also noted her contribution to digital journalism.

“Like Hedy, few people know Dean Bay is also a powerful inventor in the field of digital communication,” she said. “As a senior editor, she helped pioneer Huffington Post online, where she led various verticals including the launch of business and lifestyle. At USC, she launched the USC Annenberg Center.”

In accepting the award, Bay expressed the regret of husband Bob Iger, chairman and CEO of The Walt Disney Co., that he couldn’t attend the event.

“My husband Bob had to launch Disney+ today,” she said. “He really wanted to be here, but they’ve got something else going on.”

Bay praised the career of Lamarr, a Hollywood actress who was also an inventor with several patents.

“I got no patents,” Bay joked, adding, “I’m blown away to be mentioned in the same sentence as Hedy Lamarr, a true pioneer not just in her inventions but in forging new ways to be a woman fully in all dimensions.”

She noted that Lamarr is “the mother of Wi-Fi” and was posthumously inducted into the National Inventors Hall of Fame.

“I bet not a lot of those inventors looked like Hedy,” Bay said, noting “how much all of our lives thanks to digital and wireless are advanced because of her and how much my career actually was inspired from her scientific advance.”

Bay recalled her days as the first female anchor of CNN’s “Moneyline,” where she interviewed Steve Jobs, Jeff Bezos and others in the late 1990s.

She also worked alongside The Huffington Post’s Ariana Huffington, who she called “one of the great digital media pioneers.”

She then went on to become the first female dean of the USC Annenberg School.

During her acceptance speech, she praised members of the younger generation, including her students at USC, for their passion.

“We are watching a very young generation emerge into their roles as innovators and leaders on a very public stage,” Bay said. “We know them on a first name basis — Malala, Emma, Greta, Chanel. Malala used her voice to educate us about women’s education. Greta [Thunberg] stunned the world with her speech before the U.N. on climate change. Emma Gonzalez in Parkland is becoming one of this country’s leading voices on gun control. And there’s Chanel Miller, who wrote Know My Name, in which she courageously uses her voice and shares her story of sexual assault. These young women are making their mark in the public sphere, and they are inspiring so many of us.”

She exhorted the audience to help the younger generation to make their mark.

“Find a young person in your orbit and reach out to them,” she said. “We need to help them live up to their potential, and in doing that, we will live up to ours.”

Bay shared the spotlight with a student from her school. The DEG also presented the “Hedy Lamarr Achievement Award for Emerging Leaders in Entertainment Technology,” which recognizes female college students whose studies in the fields of entertainment and technology have shown exceptional promise, to Maya Tribbitt. Tribbitt is earning her bachelor’s degree in journalism and international relations at the USC Annenberg and the USC Dornsife College of Letters, Arts and Sciences, and will receive a financial award to continue her education.

Tribbitt interned at Amazon and worked for Kamala Harris in her Los Angeles office.