The Willem Dafoe thriller Siberia will come out on Blu-ray Disc, DVD and digital June 22 from Lionsgate. 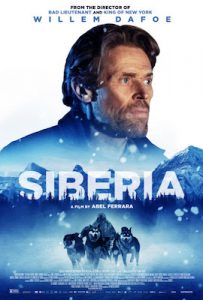 It will open in select theaters and for digital rental June 18.

In the film written and directed by Abel Ferrara (Bad Lieutenant), the keeper of a snowbound bar is pursued by sinister phantasms. Dafoe plays Clint, who tends bar at a snowbound roadhouse whose patrons speak a language he doesn’t understand, and things may not be what they seem. Desperate for answers, he drives a sled team to a nearby cave, but finds no peace. Are the spirits that confront him mere figments of his imagination — or will they slowly tear his body and soul to pieces?