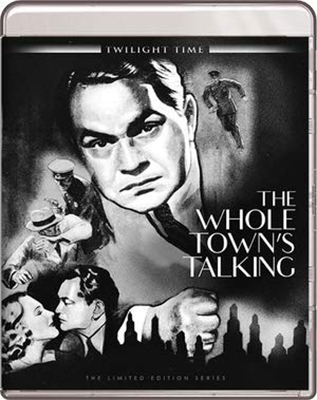 Released during one of John Ford’s typically hectic ’30s years where he also directed Steamboat Round the Bend at Fox and The Informer at RKO, 1935’s The Whole Town’s Talking (from Columbia) is more obscure than it ought to be because it is so full of … well, talking points. For starters — and in addition to being a rare Ford comedy against a backdrop contemporary to its filming — it’s a Ford mistaken-identity comedy movie that plays like a Frank Capra vehicle, and there are reasons for that.

The screenwriters here were Jo Swerling (It’s a Wonderful Life) and Robert Riskin (10 Capra’s, including most of the big ones spanning The Miracle Worker to Meet John Doe), working at Capra’s home studio for Harry Cohn, a bully it would have been fun to see in the same room with future Rear Adm. Ford. The female lead, charged with playing opposite two Edward G. Robinsons, is Jean Arthur, in the role that finally put her over with critics and audiences at age 34, though she had made her Cameo Kirby screen debut way back in 1923 (for, as symmetry would have it, Ford). And Arthur would soon become the actress most identified with Capra, what with the soon-to-follow Mr. Deeds Goes to Town, You Can’t Take It with You and Mr. Smith Goes to Washington (the first two with Riskin screenplays). Are you putting this all together? Take a cleansing breath.

The other talking point is the picture’s employment of trick photography in what then must have been pretty close to a state-of-the-art rendering because it’s still pretty effective, even in a Talking print that’s not exactly immaculate but cleaner by far than any I’ve ever seen. It’s the kind of techno-storytelling that Ford usually eschewed, possibly because there’d come a time in the filmmaking process where, by definition, he might have something less than total control once the lab guys took over. So this is definitely an oddity, though one not likely to be viewed as such by the great unwashed who prefer just to view a movie as a movie and enjoy being tickled by its gimmick.

Which is: That lowly advertising clerk Arthur Ferguson Jones (Robinson I) bears an uncanny physical resemblance to escaped con “Killer” Manion, whose every move rates banner headlines in the local papers, the way they always do in vintage gangster pics. Jones is meek, though with a very occasional devilish streak — living alone in a modest apartment with a cat, caged bird and an on-the-wall glossy of Wilhemina (“Bill”) Clark (Arthur), devilishly stolen from the office. Manion is just about what you’d assume and what audiences of the day wanted: the “do it my way, see” Robinson who wouldn’t surprise anyone — censors aside — if he referred to the Virgin Mary as a “mug.”

Arthur is finally her prototypical self on screen, and I’d be curious to know if, after a long apprenticeship, this sudden but permanent locking-in of what became her screen persona had anything to do with Ford directing. Here, she’s the one woman in a less than glamorous office of guys (note Ford’s opening shot of the lousy working ambience) and also one of the guys — though least one co-worker pest is hitting on her and there’s the unrequited crush that Jones/Robinson has (hence the stolen picture). Arthur’s character is a wisecracker all the way and cares little if she’s late to work, even in an office run by martinets when it comes to punctuality. Friendly enough toward Jones, the meek clerk is still not anyone who’s particularly on her mind. Meanwhile, and as befitting the “Killer” moniker, this alternative Eddie G. doesn’t have a whole lot of redeeming qualities, though Julie Kirgo does a good job in the Twilight Time liner notes noting certain similarities between these two male principals without forcing the issue (and, in fact, they hadn’t occurred to me).

According to Kirgo and other sources, Robinson was in a career slump when the Warners lent him out for this project, a slide this film’s popularity abated. By 1935, he had branched out a lot since his career-launching Little Caesar days, even at one point donning Chinese makeup for The Hatchet Man. But it’s also true that ’35 was the first full year that the Production Code had teeth (or yellowed dentures, if you prefer), and it also found James Cagney himself moving to the right side of the law as the lead in Warner’s scrappy G-Men and a new tendency to treat gangsters as comical subjects. Audiences for Talking got satisfied both ways with  the sweet Robinson they couldn’t often enjoy (think, say, Our Vines Have Tender Grapes for another example) and the prototypical “do it my, way, see” kind of tough guy that Robinson was even spoofing in the ’60s on his Maxwell House Coffee commercials. He was such a subtly versatile actor that there were a couple of personas left that don’t show up here: the no-nonsense ball of competence (that would be Double Indemnity) and whatever it is that he’s doing in The Ten Commandments (a performance I love because I go into convulsions from the time he first shows up in VistaVision).

So though I find Talking more on the mild side than a lot of its enthusiasts do (I prefer Steamboat and the fallen-from-grace The Informer, to be honest), there’s no question that Ford has a lot of fun with this yarn — whose plot contrivances at various points force the meek Robinson to pretend that he’s the malevolent one and vice versa. The supporting cast is filled with several familiar faces as cops or other spoofable figures of authority (Arthur Hohl, James Donlan, Paul Harvey), while Stagecoach’s Donald Meek has a very funny bit as a pest who keeps trying to collect a reward for having spurred the police to arrest the wrong man.

For those who like to follow the trajectories of actor-director teamings, we get Edward Brophy working for Ford as the two-timing minor hood that Manion wants to rub out above all else; two decades later, Brophy ended his big screen career with the best role he ever had in Ford’s adaptation of Edwin O’Connor’s The Last Hurrah (it, too, a recent Twilight Time release). According to Kirgo, Robinson and Ford (the latter a near-sociopathic needler) got along during the making of the picture, which certainly puts Robinson in an exclusive club. By all accounts, the actor was one of the nicest guys around, and this would seem to ice the assertion.

Mike’s Picks: ‘At the Drive-In’ and ‘The Whole Town’s Talking’