WarnerMedia Entertainment is making significant strategic adjustments ahead of the launch of HBO Max this May, diverting resources from its cable networks and investing instead in a rapidly growing number of HBO Max original commissions.

That, according to new data from Ampere Analysis.

By the fourth quarter 2019, streaming commissions represented 73% of WarnerMedia’s new TV projects compared to 25% from its cable networks, down from over 90% in Q4 2018. 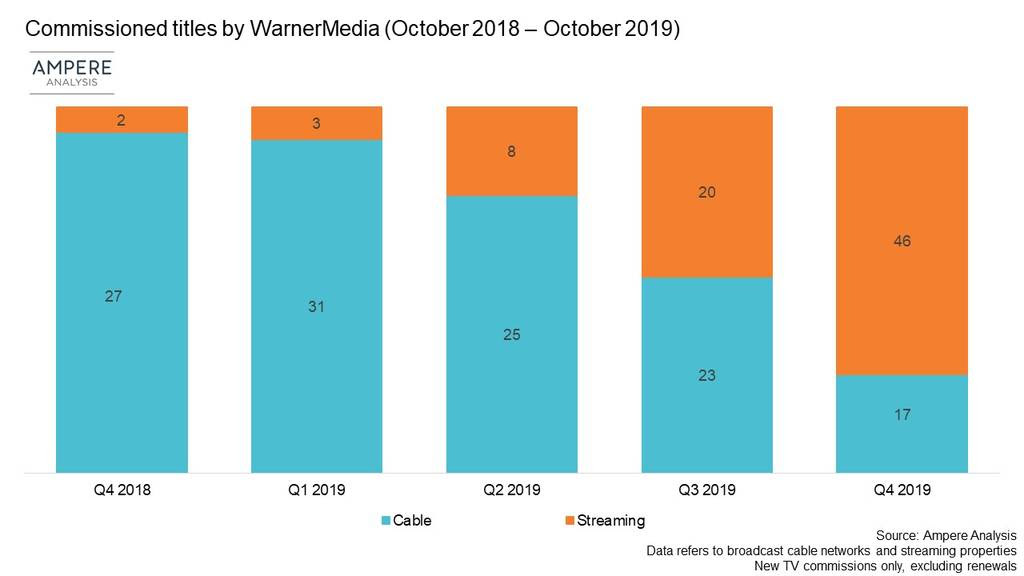 The rapid change illustrates the relegation of cable networks behind the strategically important streaming services. Streaming has grown from 7% of commissions in Q4 2018 to 73% in Q4 2019.

“Warner’s pivot towards an increasingly HBO Max-first approach to commissioning is not only apparent in the number of new projects in development, but also in the types of content being commissioned,” analyst Fred Black wrote in a note.

“This is the clearest sign yet that the home of ‘Game of Thrones’ will in the future play second fiddle to HBO Max when it comes to some of Warner’s highest-profile genre commissions,” Black said.

WarnerMedia Entertainment is the third-largest commissioner of new content titles among domestic cable groups, behind only Discovery and ViacomCBS, according to Ampere.

Ampere said Warner’s cable properties remained a top-five U.S. cable network commissioner in each quarter of 2019. However, during the year, the number of cable commissions declined each quarter as activity was ramped up at HBO Max. Cable commissions were down 37% in Q4 2019 versus Q4 2018.

Meanwhile, commissioning activity for Warner’s streaming channels (HBO Max and DC Universe) matched its cable networks for the first time in August 2019 – at four apiece. Overall, Warner is investing heavily in content. The company made more than double the number of commissions in Q4 2019 (63 titles) as it did in Q4 2018 (29 titles).