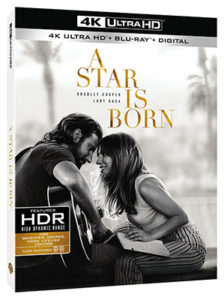 The fourth Hollywood incarnation of the classic story stars Bradley Cooper and Lady Gaga as two musicians who come together on stage and in life in a complex journey through the beauty and heartbreak of a relationship struggling to survive.

Lady Gaga performs original songs in the film with Cooper, which they wrote with a handful of artists, including Lukas Nelson, Jason Isbell and Mark Ronson. Vocals were recorded live during filming.

The film has earned about $200 million at the domestic box office and was nominated for five Golden Globes, including Best Motion Picture – Drama, Best Director and Actor for Cooper, Best Actress for Lady Gaga, and Best Original Song for “Shallow.”

In addition, the Feb. 19 disc street date comes in the week leading up to the 91st Academy Awards ceremony.

The home video editions of A Star Is Born will feature almost 10 minutes of never-before-seen musical performances by Cooper and Lady Gaga, with jam session recordings of the songs “Baby What You Want Me To Do,”“Midnight Special” and “Is That Alright.”

The disc will also include the featurette “The Road to Stardom: Making A Star Is Born” and music videos for “Shallow,” “Always Remember Us This Way,” “Look What I Found” and “I’ll Never Love Again.”