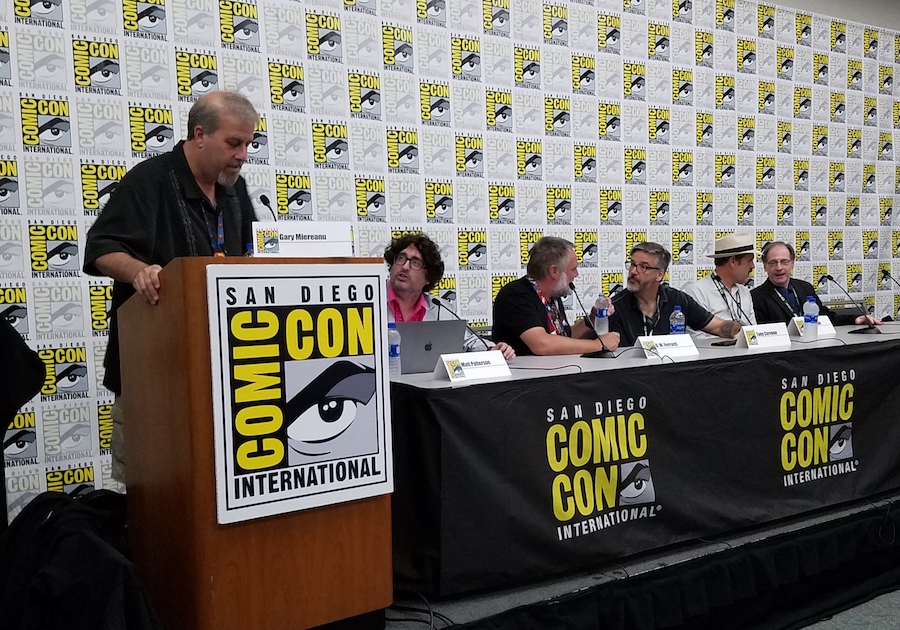 Classic cartoons and new direct-to-video titles were highlighted at the 2018 San Diego Comic-Con International over the weekend by Warner Bros. Home Entertainment and the Warner Archive Collection.

In the July 21 panel “This Is Your Life, Jonny Quest,” Warner Archive Collection podcaster D. W. Ferranti announced the upcoming release of the classic cartoon “Jonny Quest” on Blu-ray “mastered from the original broadcast masters, complete, uncut, nothing changed.”

Panelists noted the groundbreaking nature of the cartoon.

“It was quite a game changer in its day,” said animation historian Jerry Beck of the more than 50-year-old show. “There was nothing like it made for kids.”

“When you get into its DNA, everything after ‘Jonny Quest’ in terms of adventure cartoons and animation, it’s all post ‘Jonny Quest,’” added animation producer Spike Brandt. “’Jonny Quest’s’ influence is undeniable and it’s huge. Without ‘Jonny Quest,’ you don’t get ‘Rick and Marty.’”

Fellow producer Tony Cervone summed up the fan enthusiasm, noting “when you’re a 9-year-old boy, you’re just like … robots and mummies and dinosaurs and explosions and kids flying and so many guns!”

Panelists also showed clips from and talked about the show’s many incarnations from the 1960s through the 1990s, including a crossover movie featuring the Tom and Jerry characters.

Warner Archive podcasters Matt Patterson and Ferranti also appeared on a “Warner Archive’s Toonstock” panel moderated by Gary Miereanu that featured voice actor John DiMaggio. Panelists discussed DiMaggio’s portrayal of Aquaman in Batman: The Brave and the Bold and hosted a sing-along to the episode “Mayhem of the Music Meister.”

Warner also highlighted the Blu-ray boxed set of Batman: The Animated Series, due in late 2018, with producers, voice director and cast; premiered Scooby-Doo and the Gourmet Ghost, due on digital Aug. 28 and DVD Sept. 11, with a panel of voice talent; premiered Super Hero Girls: Legends of Atlantis, due Oct. 2 on digital and DVD; and premiered and hosted a panel of talent for LEGO DC Comics Super Heroes: Aquaman — Rage of Atlantis, due on Blu-ray Combo Pack, DVD and digital July 31.