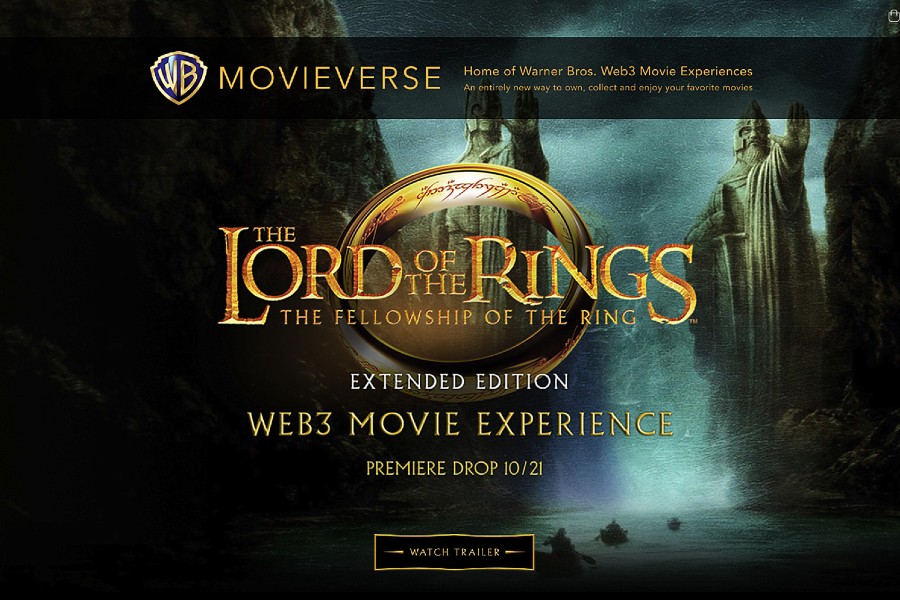 Warner Bros. Home Entertainment Oct. 20 announced the launch of the WB Movieverse with The Lord of the Rings: The Fellowship of the Ring (Extended Version) Web3 Movie Experience, or multimedia non-fungible token (NFT), available for sale beginning Oct. 21. A limited quantity of tokens (999) will be made available for purchase by credit card or crypto currency.

The release is the first in an anticipated series of Web3 movie offerings from Warner Bros. Home Entertainment.

Working with blockchain technology operator Eluvio, Warner is the first studio to offer a major movie as a multimedia NFT and Web 3.0 release. The latter is considered a new generation of the internet that advocates for use of decentralized apps and heightened data privacy — moving users’ data away from a centralized platforms like Facebook, YouTube, Netflix or Prime Video, and to a personalized crypto wallet.

Available in either The Mystery Edition ($30) or The Epic Edition ($100), owners have access to the extended version of The Fellowship of the Ring in 4K UHD, including more than 8 hours of special features, image galleries, hidden AR collectibles, and themed navigation menus based on locations from the film, as well as the ability to own and trade the experience in a community marketplace.

“Fans of The Lord of the Rings can now acquire, participate and trade in a living media experience that will undoubtedly surprise and delight them,” Michelle Munson, co-founder/CEO of Eluvio, said in a statement. “Warner Bros. Home Entertainment is setting a new bar for innovation in the distribution of home movies by demonstrating the potential of Web3 for consumer engagement, digital supply chain transformation, and new business opportunities.”

The Lord of the Rings: The Fellowship of the Ring was originally released in 2001 by New Line Cinemas from director Peter Jackson. The first of six movies in the franchise would go on to generate almost $900 million at the global box office, including $316 million in North America.