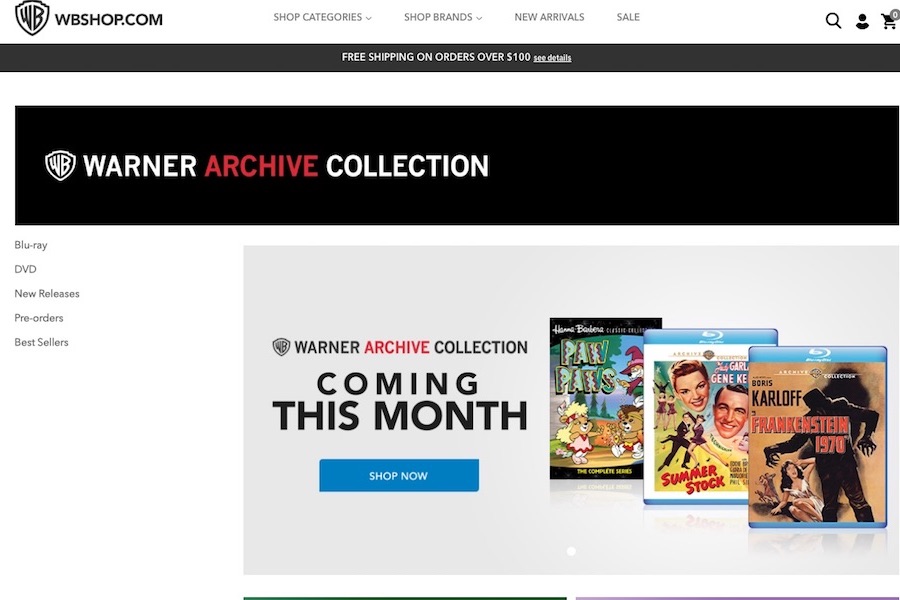 Since its first collection of 150 titles released in March of 2009, Warner Archive has navigated a host of changes in home entertainment business models and formats while releasing catalog titles on MOD from every decade and for every taste.

“Whether it’s Bogart and Bacall or whether its Hitchcock or Hammer horror films or Busby Berkeley films, we’re releasing something for everyone,” said George Feltenstein, SVP of theatrical catalog marketing at Warner Bros. Home Entertainment, who heads up the unit.

It’s also generated well in excess of $100 million in revenue for the studio over the years.

Manufacturing on demand is a process by which a disc is created when a consumer orders it, offering consumers access to titles that don’t have the kind of demand that supports a traditional pressing.

The kernel of the idea for its use in home video entertainment came from Warner’s Jim Wuthrich (currently president of worldwide home entertainment and games), Feltenstein recalled.

Feltenstein had been working on a joint venture with Rhino Records for soundtracks in 2002 and 2003 under a label called Handmade. “They would produce 2,500 units of albums that were aimed at collectors, and when they were sold out, they were sold out,” he said. “And it was a profitable way of getting niche content out to the consumer. You could only buy it online.

“So Jim saw the CDs in my hand and he asked me about them, and I explained the business model, and he said, ‘That’s fascinating. I have to figure out a way that we can get our deeper library titles out on DVD.’”

MOD turned out to be the ticket, and several years later, with the help of Allied Vaughn, Warner Archive on March 23, 2009, released its first MOD collection.

“To my knowledge, [MOD] didn’t exist in our world, meaning the Hollywood studio world,” Feltenstein said. “We were the first studio to do this. Nobody had ever done it before.”

That first collection of 150 titles on DVD included some starring the legendary Debbie Reynolds, a “dear friend” of Feltenstein’s.

“On the morning of the 23rd, Debbie Reynolds was in New York on ‘The Today Show’ announcing the launch of the Warner Archive Collection,” Feltenstein said.

“She explained what it was and that some of her films were part of the initial offering. And then that night I did something that I used to do every year and had done for about 11 or 12 years at that time. We would have a yearly chat on the Home Theater Forum, which was and still is a fan site.”

During the chat, Feltenstein tried to allay any fears about the quality of the MOD discs. Warner Archive also had been careful to provide the proper aspect ratio (no pan-and-scan cutting out part of the picture).

“People were very excited, but to be fair there was also some trepidation,” he said. “There was concern about that fact that these were manufactured on demand, and people thought that DVD-Rs were not … they thought that manufactured on demand was similar to burning a disc on your computer, and it’s just not. It’s a fuller technology. The DVD-Rs and the process we went through was a much higher quality, so eventually — and it took a long time — eventually we gained consumer confidence, and now that it’s been 10 years, I’ve noticed people posting on the sites, ‘I have Warner Archive discs that are nine, 10 years old, and I’ve had no problems with them.’”

Those chats would soon lead to podcasts, all available on iTunes, and appearances at such fan confabs as Wondercon and Comic-con at which Feltenstein and staff would talk about upcoming releases and interview stars and directors from the Golden Age of Hollywood and beyond.

Those first 150 releases included such classic features as Mr. Lucky with Cary Grant and Laraine Day, The Enchanted Cottage with Robert Young and Dorothy McGuire, Abe Lincoln in Illinois with Raymond Massey, Edison the Man with Spencer Tracy, and Private Lives with Norma Shearer and Robert Montgomery, but also included more recent films such as Kaleidoscope with Warren Beatty, Oxford Blues with Rob Lowe and Wisdom with Emilio Estevez and Demi Moore.

The collection included “a lot of really good films that just hadn’t made their way to DVD and when you’re dealing with the wonderful incredible library that we’re so blessed to have, you know it’s an embarrassment of riches, and the response was tremendous,” Feltenstein said.

As the catalog business waned at traditional retailers, Warner Archive was able to offer more and more classic titles via MOD — assisted by the technology to offer dual-sided discs and eventually Blu-ray Disc.

The kind of content expanded as well, beyond feature films.

“We have 3,250 releases on our docket as of now,” Feltenstein said. “We started with feature films only. We expanded into made for television movies, and we eventually were able to start adding television series.”

“Eventually we got to the point where we were confronted with the fact that masters on the shelf were starting to run out, that we would need to start creating new masters if we wanted to maintain our quality standard, and our standard of making sure we had original aspect ratio, and so forth,” Feltenstein noted.

Thus, a side product of Warner Archive was preservation of content that could have languished and deteriorated on the shelf.

“Our first remastered releases came out in June of 2010, basically 15 months after launch,” he said.

Eventually, most of the other studios caught on to MOD, but none had a unit like Warner Archive, Feltestein said.

“I like to refer to it as the boutique within the behemoth,” he said. “We have a very small dedicated staff, very engaged with consumers.”

Those consumers add up to a profitable business for Warner.

“It may be a smaller group of people, but there is still a rabid fan base out there for all sorts of content where people want to own things, and we’re trying to take advantage of that in a profitable way, listening to fans, watching sales,” Feltenstein said.