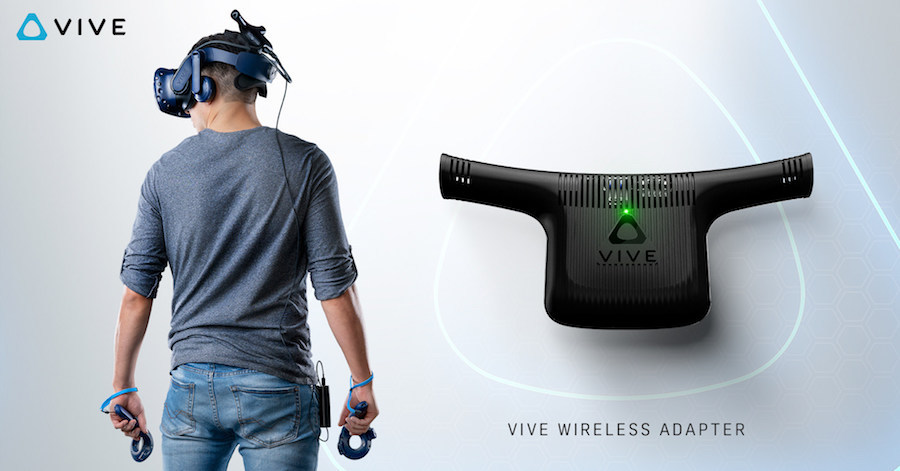 The Vive Wireless Adapter cuts the cable back to the PC.

The adapter frees VR users from the tether back to their PC, while maintaining the performance requirements for premium VR on both the HTC Vive and Vive Pro, according to a press release from HTC Vive.\For customers in the United States, pre-orders will be available at Amazon, Best Buy, Microsoft Store online, NewEgg and Vive.com.

“Since the first demos of Vive, we’ve known that to deliver on the best of premium VR, we wanted it to be wireless,” said Daniel O’Brien, GM, Americas, HTC Vive, in a statement. “But we learned that delivering a great wireless experience takes time and really smart partners. We’ve brought the engineering expertise together to deliver a truly first of its kind wireless VR experience. Thanks to Intel and DisplayLink for helping to make this vision a reality.”

To install the Vive Wireless Adapter consumers use a PCI-e card and attach a sensor from the PC that broadcasts to and from the wireless Vive headset. The adapter has a broadcast range of 6 meters with a 150 degree field of view from the sensor and runs in the interference-free 60Ghz band using Intel’s WiGig specification, which, combined with DisplayLink’s XR codec, means low latency and high performance with hours of battery life, according to the company.

The adapter is powered by the HTC QC 3.0 PowerBank, which can also double as a charge pack for a smartphone. The retail package ships with one PowerBank and additional PowerBanks will be purchasable at Vive.com.

“I congratulate HTC and we are excited to see a flagship device and new user experience enabled by Gigabit, low-latency wireless,” said Dr. Cormac S.G. Conroy, corporate VP and GM, Intel Communication and Devices Group, in a statement. “In building this mmWave solution, we had our eyes on the demands of VR and leveraged our deep 5G wireless experience. We understood the performance needs of VR and the gaming and enterprise markets. We can’t wait for everyone to bring what we’ve been working on into their homes and into their VR arcades.”

“DisplayLink’s heritage is in solving complex problems for enterprises all over the world,” said John Cummins, SVP, sales and marketing, DisplayLink, in a statement. “We’re very excited to deliver the freedom and complete immersion of wireless VR to businesses and the application development community that serves them. For gaming, arcades, training, and future applications yet to be developed, the promise of low latency, high quality wireless VR is available now.”

“Wireless represents the true promise of VR and Seeking Dawn,” said Freeman Fan, founder & CEO, Multiverse Entertainment, in a statement. “Our gameplay in Seeking Dawn capitalizes on the freedom of wireless, and we can’t wait to showcase how wireless changes the expectations around VR content.”

To celebrate the launch, all Vive Wireless Adapter purchases will include a two-month trial to Viveport Subscription, offering access to nearly 500 titles, including Seeking Dawn.