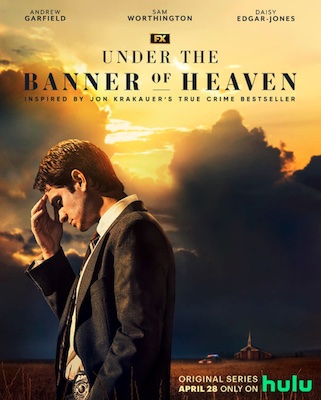 Based on the best-selling nonfiction book by Jon Krakauer, this story about actual murders is told through the eyes of a fictional devout detective (Andrew Garfield) whose faith is tested as he investigates the crime’s connection to a well-known Utah family’s spiral into Mormon fundamentalism and distrust in the government.

Beginning with dull, desaturated tones, the series starts like a horror film, as dark clouds and a fallen bird’s wing enter the screen. The camera moves to a happy family scene as Detective Jeb Pyre (Garfield) plays with his daughters under the ominous sky. A call sends him to the aftermath of a bloody attack, which the viewer only glimpses. From the expression on Pyre’s face, viewers imagine the massacre he sees. Outside, Pyre finds a blood-soaked man. That man assists him in uncovering the mystery of the murder, as well as certain uncomfortable truths about his faith illustrated in period flashbacks involving its founding fathers.

Punctuated by historical reenactments, the seven-episode series unwraps the events leading up to and resulting from the 1984 murder of Brenda Lafferty and her infant daughter. We meet the Lafferty brood as Brenda becomes involved with and eventually marries one of six sons in the devoutly Mormon clan — a sort of LDS Kennedys, she explains to her family. But the loving facade of the Laffertys soon falls away under the economic pressure of a recession and the strict dictates of an overbearing father. Religion becomes a justification for flouting the law, abuse, misogyny — and ultimately murder.

Brenda’s husband (played by Billy Howle) is a (possibly unreliable) narrator of the story, pointing out to Pyre, “Our faith breeds dangerous men.” He relates many of the historical tales that show the violent and vacillating doctrines of revered Mormons such as Joseph Smith and Brigham Young, linking their teachings to the actions of his family. But while Mormonism is implicated, the series effectively portrays how men can use any religious teachings — Mormon or other — to rationalize their own selfish desires. Sam Worthington, as Ron Lafferty, and Wyatt Russell, as Dan Lafferty, skillfully portray the transformation of two brothers who lose their moral compass as they twist religious history to make sense of misfortune and fit their aims. Playing two other brothers, Seth Numrich and Rory Culkin — in a particularly creepy turn — also bring this family descent into antisocial behavior to life.

Daisy Edgar-Jones plays Brenda, the moral anchor, a devout Mormon showing the Laffertys’ apostasy in sharp relief. Likable, loving and helpful, she acts with righteous vigor, supported by the church, in the face of the “evil” infecting the clan — showing a bravery that ultimately ends in her death and that of her 15-month-old daughter.

Gil Birmingham’s wry turn as Pyre’s gum-chewing Native American detective sidekick Bill is a welcome relief. As a secular observer, he’s got many of the most clever lines, and Birmingham delivers them with an understated aplomb.

But Denise Gough, as Ron’s wife Dianna, who is also hunted by her husband and his family, delivers the most cutting lines, a condemnation of what would now be called “toxic masculinity.” “Do you step on women’s necks because it make you feel taller? Because your mother told you you were a chosen one? That our country is to blame for your failings?” she says to one of the clan. “Well, it’s a lie. You are not special. You are not chosen. You and your brothers simply failed. You are a small, weak child of a man.”

Indeed, the weakening of faith is the ultimate message of the series, which ends with the capture of the murderers by a shaken Pyre. True crime buffs may find the final episode a bit unsatisfying, as there is no court scene or slamming of the jail doors on the two culprits. What happens to the men who perpetrate the murders is left to further investigation by viewers. Their guilt is unquestioned, but at the conclusion Pyre, it seems, continues to secretly question his faith.