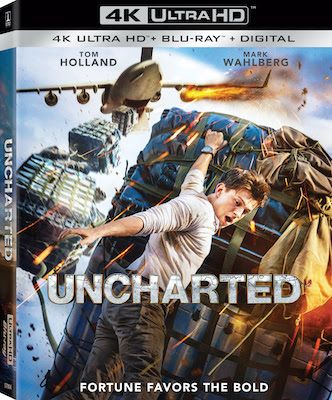 While not a perfect adaptation of the popular video game franchise of the same name, Uncharted delivers an entertaining adventure film pastiche anchored by its likable leads.

The casting of Tom Holland to play the game’s protagonist, treasure hunter Nathan Drake, was almost certainly an attempt by Sony to repurpose the most bankable star on their roster as the anchor for a new franchise following his mega-successful “Spider-Man” movies. However, as Holland is a bit young to play the seasoned Drake portrayed in the games, the film’s plot takes on the flavor of a prequel, telling the story of Nate’s first big adventure.

In taking this direction, the film draws inspiration mostly from the third and fourth games, which featured flashbacks to the younger Nate’s time spent as a wayward youth in an out of orphanages with his brother, Sam.

Mark Wahlberg plays Sully, who in the games is Nate’s mentor and pilot, but is presented in the film as more of a rival and reluctant ally as the pair learn to trust each other to set up the relationship seen in the game. Wahlberg had actually been tapped to play Nate when attempts to make an Uncharted movie first started swirling a decade ago.

In the film, Sully recruits Nate to help him find the lost treasure of Ferdinand Magellan. Sully explains that he had been working with Sam, who disappeared, and he needs Nate’s help to decipher the clues to the whereabouts of Magellan’s ships. Nate agrees, hoping to find his long-lost brother.

Standing in their way is Santiago Moncada (Antonio Banderas), whose family originally funded Magellan’s expedition. He wants to find the gold collected by Magellan’s crews in order to restore his family’s name.

From there, the film is pretty straightforward in sticking to the tropes of treasure quests — from Indiana Jones to National Treasure to The Goonies — with the characters navigating their way through clever clues and death traps to discover the prize. Director Ruben Fleischer provides a commentary track on the Blu-ray in which he lays out many of his inspirations for the film, as well as his attempts to stay true to the spirit of the games while also laying the groundwork for future movies.

Holland and Wahlberg for the most part seem like their typical film personas than the characters from the game they’re supposed to be playing, but they work well together, and their breezy charisma brings a lighter touch to the proceedings. And, at times, the action does evoke some of the feeling of playing the games.

Aside from some clunky CGI used to enhance certain action scenes, the film looks great, hopping around the globe from one exotic locale to another.

The Blu-ray includes several behind-the-scenes featurettes that tally close to a half-hour in total. The four-minute “Becoming Nathan Drake” looks at Holland’s take on the character, while the four-minute “The Buddy System” looks at the pairing of Holland the Wahlberg. The four-minute “Villains, Backstabbers, & Accomplices” examines many of the films’ supporting characters; while the four-and-a-half-minute “Charting the Course: On Set With Ruben Fleischer” delves into the director’s vision for the film. The six-minute “Never a Dull Moment: Stunts & Action” is pretty self-explanatory, and is supplemented by a five-minute breakdown of a big action scene set on a cargo plane.

Among the promotional materials are a three-minute music video for “No Mind” by Milkblood, and four-minutes of Web ads.

Rounding out the extras are more than 10 minutes of deleted scenes that offer some fun additional tidbits and character interactions.