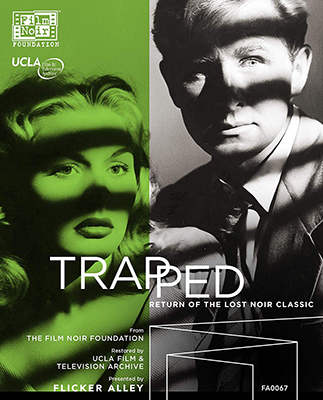 For a tawdry, if seductively so, minor melodrama that director Richard Fleischer apparently didn’t even mention in his memoirs despite early-career finesse with noir, Trapped is full of what genre enthusiasts, at least, would count as curio compensations. At very least, for any academic who’s thinking of penning a thesis on Lloyd Bridges’ versatility or at least adaptability, this resourceful cheapie is from the actor’s early malevolent period that was and still is 20,000 fathoms away from “Sea Hunt,” the syndicated ’50s TV series in which Bridges spurred a lot more boomer males to don flipper footwear than Dustin Hoffman later did in The Graduate. And an even further distance away from Airplane!, though that’s something you can say about most movies.

Also for starters, it’s another in the delectable run of Eagle-Lion’s semi-documentary procedurals — all from the late ’40s, all touting the arduous crime-busting work of government agents and a film cycle generally more identified with Anthony Mann, who had a few more features on his resumé at the time than Fleischer but was roughly at the same point in his career. Both before and after, Fleischer made quite a B-noir name for himself ay RKO, though I never quite figured where the filmmakers’ girl-and-her-dog Banjo fit into the same-era equation.

As for Eagle-Lion’s brand of noir, you know the drill: We begin with a government insignia on screen, followed by an on-screen real-life official or stolid actor/narrator (usually Reed Hadley but sometimes, as here, a Hadley wannabe) who talks up government worker cooperation as a key to apprehending felonious slugs. In this case, it’s the Secret Service pursuing counterfeiters, often with the benefit of location shooting because Eagle-Lion lacked cavernous sound stages — something that turned out to be a then-and-now bonus when it captured locales that now exist in different form. Trapped, however, is the only one of this ilk to feature Barbara Payton, which certainly makes it unique on the casting level (noir follow-up Kiss Tomorrow Goodbye, which teamed her memorably with the immediately post-White Heat James Cagney, was a much higher-profile Warner Bros. release).

Trapped was, in fact, Payton’s de facto screen debut, and despite the fact that she became the all-time poster child for how to deep-six your career in a blink with outlandish off-camera behavior, it shouldn’t be forgotten that she could really act and that the viewer’s eye (at least in 1949 and ’50, her presto/paput prime) automatically gravitated toward her whenever she entered a scene. I don’t think anyone was going to cast her in some new version of Vanity Fair, but in terms of film noir, she could play with the big kids. And in this case, she’s seen in cigarette-girl garb that almost looks tailored to her precise specifications — one that further helps attract an elderly nightclub patron who’s perceived to be a high roller (John Hoyt). All of this makes boyfriend Bridges jealous over the attraction.

But he’s also pragmatic. Bridges is just out of what Cagney used to term “the stir” — though the deal for his release has been predicated on his willingness to track down long unseen plates used to counterfeit money and to which he may still have access. We can’t tell at first whether Bridges is really going to go along with this all the way or eventually go rogue, but in any event, he thinks Hoyt’s green can give him what in a mining Western would be called a grubstake to operate. Unfortunately, the so-called associates with whom Bridges left the plates during his long visit to the Hotel Slammer aren’t what President Trump used to call “all the right people.” They operate like someone Tonya Harding’s husband might hire for a kneecap caper, except that they snivel too much.

Eventually, Bridges does go rogue, and there’s another surprise as well, which sets up a showcase for the actor to display a nasty side that pretty well defined his early screen career, something of which my childhood self was unaware of for a while. I remember as a kid watching him in “Sea Hunt” and then having my eyebrows raised by seeing how two-faced he was with hero Gary Cooper in High Noon the first time I saw it in 1959. This was quickly followed that same year by a viewing of Bridges’ truly psychotic turn in 1950’s Try and Get Me, a supremely powerful chunk of nastiness that the deservedly esteemed Alan Rode references a couple times on this Blu-ray’s commentary as culmination of Bridges’ persona in Trapped.

His character here is definitely hot on the trigger, and there’s a convincing and not un-lengthy indoor fight scene involving Bridges that hasn’t too many edits and looks pretty close to the real deal. He’s a real presence here, and a lot of gas goes out of the picture when he basically disappears for filmmaking reasons that remain unclear. When the film showed on Turner Classic Movies a couple months ago, host Eddie (“Czar of Noir”) Muller could only speculate that Bridges might have caught a bad cold, an educated guess repeated by Rode here. Tightfisted Bryan Foy was Trapped’s producer, and he was just the kind of guy to barge on through with the cutting and pasting to make a bad-break vehicle “play” — somehow.

The mention of Muller and Rode (plus Flicker Alley as the Blu-ray distributor) is a tip-off that Trapped is the latest restored movie orphan by the dual godsends of their Film Noir foundation and the UCLA Film & Television Archive, which leads to one of the most important additional reasons the picture is of interest. I won’t say that the existing 16mm prints of the film were eyesores for the ages, but sometimes I wonder if they were responsible for my eventually needing cataract surgery. It was on the Foundation’s “wish list” without much hope of fulfillment until someone mentioned a pretty decent 35mm print that had been deposited at Harvard (presumably not in an archival Barbara Payton Collection). There are still blemishes to be seen, but the result is pretty stunning in before-and-after examples — the way that Edgar G. Ulmer’s Detour was in Criterion’s release of it last year. The latter starred Tom Neal, and if you know your Neal-Payton movie history, well … that’s another story and one of mutual destruction.

Rode’s commentary partner is the luminous Julie Kirgo — a good pairing (let’s see more) and the source of the factoid that Trapped didn’t even make Fleischer’s autobiography, which I’ve had in galleys for decades now but have never read (she says it’s one of the best). Also included along with Flicker Alley’s typically high-grade packaging — the quality of paper used for photo and poster reproductions is gloss-Y — is an interview with son Mark Fleischer, who seems like a good guy, plus a production look-back featuring Muller and more. Throughout, we catch tantalizing glimpses of L.A. geography from a long-gone time, as in The Man Who Cheated Himself (which previously got Film Foundation treatment), Without Warning and Kiss Me Deadly, to name three.

After a rough period with HUAC where he semi-cooperated, and not happily, with the Blacklist, Bridges kept at it with steady employment, most of it in TV, and became a steady working-actor while not doing too badly in the father department. Hailing from Cloquet, Minn., the same town as Jessica Lange, Payton didn’t have the same caliber of JL’s career or anything close. It’s well known that she descended into boozing and even prostitution before dying at 39, but in an attempt to be at least a little upbeat here, there’s a definite amusement factor thinking about her showing up on the Paramount lot amid a fling with the serially unfaithful Bob Hope (double standard here?) and spurring one of the studio’s two biggest stars to put out frantic emergency word to bar her from the lot. I wouldn’t be surprised to hear that this led to Dolores Hope, an early grad of the Camille Cosby School of Public Denial, to build an extra wing at the mansion to supplement any others as places of primary residence. (“But I just wanna say …”)

One thought on “Trapped”