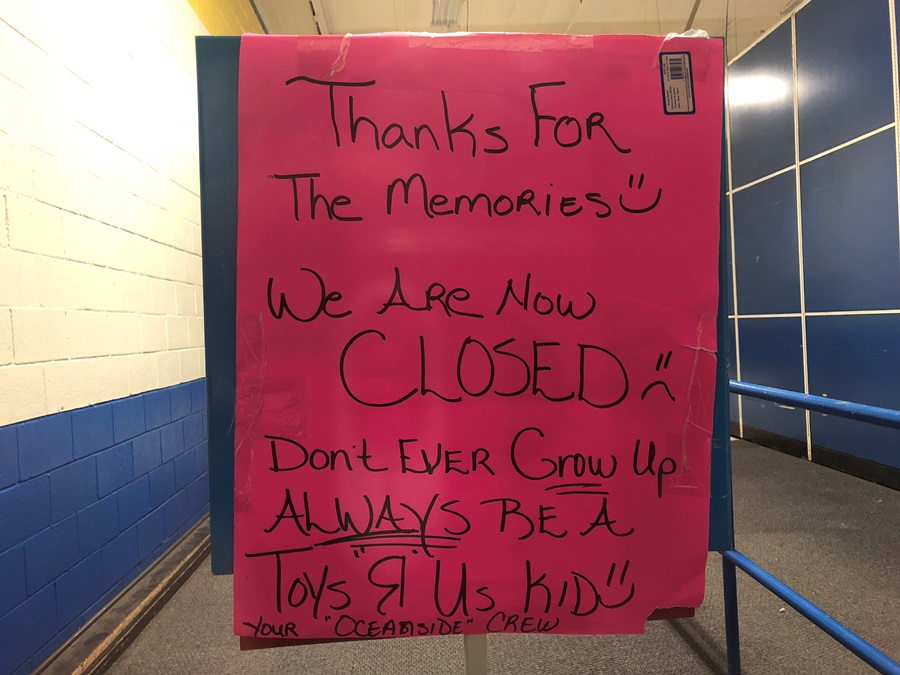 Toys ‘ R’ Us is officially history.

The struggling toy chain – once a significant player in the DVD/Blu-ray Disc and video game sellthrough market – closed the last of its U.S. stores last week.

A sign taped to the inside of the glass door to a now-empty Toys ‘R’ Us store in Oceanside, Calif., reads, “Thanks for the memories. We are now CLOSED. Don’t ever grow up. ALWAYS be a Toys ‘R’ Us Kid.

Just three months ago, in April, the same store still had plenty of discounted toys on the shelves – and customers in the aisles, looking for a bargain.

But the movie and video game department – set off in a corner, store-within-a-store style – was nearly bare.

The video game section, in particular, was virtually depleted, with catalog games for the big three consoles priced at 15% off the list price.

Discs were even more deeply discounted, at 20% off. But the selection was a shadow of what it used to be, and the rack was about half empty.

All that was left were budget cartoons and family movies as well as a smattering of marquee titles, including Walt Disney combo packs of Snow White and the Seven Dwarfs and the live-action Beauty and the Beast, Universal Pictures’ The Fate of the Furious, and Warner’s Justice League.

Toys ‘R’ Us was founded by Charles Lazarus in 1957, nine years after he launched a children’s furniture store, to which he gradually added more and more toys. Toys ‘R’ Us subsequently expanded into a chain and ultimately operated around 800 stores in the United States and roughly the same number abroad.

But with the rise of discount chains like Walmart and Target Stores, with their sizeable toy departments, toy specialists found it increasingly hard to compete. The rise of the Internet and the surge in e-commerce made things even more difficult. K·B Toys and FAO Schwarz were among the casualties (although Toys ‘R’ Us picked up both chains’ remains), while Toys ‘R’ Us limped along, closing stores and negotiating with toy makers for better deals.

A $7.5 billion leveraged buyout in 2005 by Bain Capital, KKR & Co. and Vornado Realty Trust loaded Toys ‘R’ Us with debt, weakening the chain’s position even further.

On March 14, 2018, Toys ‘R’ Us announced that all of its stores in the United Kingdom would close. The next day, it was announced that the U.S. operations of Toys ‘R’ Us were going out of business as well and all 735 of its remaining U.S. locations would be shuttered.