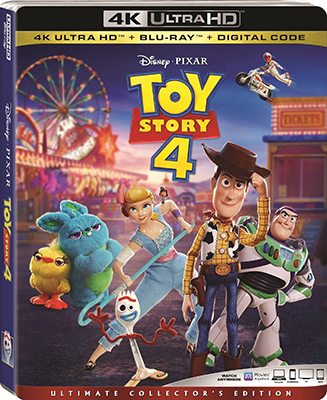 While the prospect of a fourth “Toy Story” movie was exciting news for fans of the franchise, there were some questions about whether the adventures of Woody, Buzz and the gang might have run their course. After all, the third movie from 2010 was an emotional rollercoaster that seemed to provide a decent, if bittersweet, sense of closure for the characters.

Of course, the question about what stories were left to tell had already been answered long before the fourth movie was announced, not only through three short films, but also two half-hour television specials. So, yeah, there’s more than enough material to mine.

There would still be the challenge of making any new film feel like an event worthy of the franchise. The movies should at least be somewhat transformational, redefining the status quo of the characters beyond what can be accomplished in a short film.

Well, the team at Pixar Animation Studios certainly achieved that goal, and then some. Toy Story 4 isn’t the best film in the franchise, but it might be the most cathartic. Where the previous film was a bit of a gut punch, this one offers more of a natural progression for the characters.

After a flashback that shows how Woody’s love interest, Bo Peep (Annie Potts) was given away (mentioned in Toy Story 3), we check in to see how the toys are doing with their new owner, Bonnie. While she exhibits a rich imagination, she tends to leave Woody (Tom Hanks) sidelined, leaving him to wonder what his place in her life is.

Bonnie then creates a new toy, named Forky (Tony Hale), out of trash at school, and when he would rather return to the garbage than play with Bonnie, Woody assigns himself the task of educating the new toy and making sure he’s available for her. Woody’s task gets more complicated when Forky manages to jump out of the RV on a family road trip. In retrieving him, Woody comes across an antique shop and reunites with Bo. But Forky is captured by a doll at the shop who wants to trade him for Woody’s pull-string voice box to replace her own defective one, hoping the fix will help entice a kid to want to play with her.

Bo, on the other hand, presents another option for life as a toy: roaming free, with no owner, never worrying about being played with or not and determining her own fate. Meanwhile, Buzz Lightyear (Tim Allen) sets out on a mission to find Woody, bolstered by a hilarious running gag of him activating his own voice feature so he can get advice from his “inner voice.”

So, yes, the movie does return to the “recover a lost character” motif that has been a staple of the franchise (and, indeed, most Pixar films), putting a few new spins on the formula along the way. The antique shop and a nearby carnival are wonderful settings for toy-level adventures with inventive new characters, such as Canadian motorcycle-jumping daredevil Duke Caboom (Keanu Reeves), and a pair of game-prize plushes voiced by Key & Peele.

The only area of concern, really, is that each passing movie runs the risk of potentially piercing the suspension of disbelief about the toys being alive, which some of the characters actually joke about in this one. One need to simply look no further to the living vehicles of the world of “Cars” to see how much such questions can distract, and detract, from the narrative.

The “Toy Story” movies have all been visual marvels, and the fourth one is no exception, advancing the state of CGI to render fantastic textures and details on the toys and their environments. The carnival offers a great excuse for bright colors and warm lights, while the antique shop provides a trove of subtle references.

The Blu-ray is loaded with a lot of great behind-the-scenes material, including an insightful feature-length commentary track by director Josh Cooley and producer Mark Nielsen in which they discuss all sorts of challenges to crafting a fourth “Toy Story” film.

Some of the more pivotal sequences get their own callout in the form of “Anatomy of a Scene” videos in which the filmmakers discuss and joke about making them. The disc includes a nine-and-a-half-minute look at the playground scene, while a seven-minute deconstruction of the prologue serves as a digital exclusive.

The disc also includes 28 minutes of deleted scenes, still in storyboard form, that show some of the unused concepts for the film, including an unused ending that would have pretty much negated the film’s message of finding your own place in the world.

The various featurettes included offer interesting glimpses of the production with the usual interviews with cast members and filmmakers, but often show them interacting in ways not typically presented in such videos.

There is a six-minute “Bo Rebooted” video about how Bo’s character was expanded into a major role for the film. Another, three-and-a-half-minute piece, spotlights the relationship between Woody and Buzz.

The new characters are shown off in a series of “Toy Box” videos that run 13 minutes, while an additional six-minute featurette focuses on new castmember Ally Maki and her pint-sized character.

One of the more nostalgia-infused featurettes is a five-and-a-half-minute “Toy Stories” piece in which several of the cast and crew recall the toys they played with as children.

Among some of the more random video bits are a few minutes of animation showing off the carnival and the antique shop roof from the toys’ perspectives, plus a series of promotional videos including character vignettes and trailers from around the world.

Some digital retailers, such as Vudu, also offer a two-and-a-half-minute “Toy Story Rewind” video in which the cast and crew reflect on the previous movies.