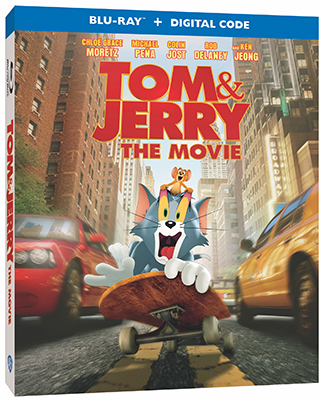 The new movie version of the classic “Tom & Jerry” cartoons is a departure of sorts for live-action adaptations of iconic animated animal franchises.

Instead of trying to render a CGI version of the characters that is more or less supposed to represent how they would look in the “real world,” often with awkward and unsatisfactory results, Tom & Jerry borrows from the Who Framed Roger Rabbit school and puts the characters in their traditional 2D animated glory interacting with a live-action environment.

The end result is a bit goofy but a lot of lighthearted fun, as the famed cat and mouse bring their violent rivalry to a fancy Manhattan hotel looking to host a high-profile wedding.

Caught in the middle is Kayla (Chloë Grace Moretz), a young drifter whose job delivering laundry is hampered when the duo crash into her fighting in Central Park while performing for loose change. Tom (the cat) wants to be a concert pianist, while Jerry (the mouse) just wants to find a place to live.

They all stumble upon the hotel, where Kayla smooth talks them into hiring her for the temp staff brought on to help with the fancy wedding of a couple of social influencers (Colin Jost and Pallavi Sharda). With management not wanting Jerry’s mayhem to give people the impression the hotel is infested with mice, Kayla volunteers to catch him, and brings in Tom to help, much to the chagrin of her stern supervisor (Michael Peña).

Of course, chaos ensues in the form of some typical Tom and Jerry battles.

To ease in the consistency of its worldbuilding, the film presents every animal as a 2D animated character, from pigeons flying through central park, to other cats harassing Tom, to Spike the bulldog (voiced by Bobby Cannavale), and even a pair of elephants brought in for the wedding.

About the only drawback is that Tom and Jerry are almost side characters in their own movie, serving more as plot devices to the story of Kayla trying to stay out of trouble and pulling off the wedding as her supervisor schemes to undermine her. Still, the film should keep younger family members entertained while remaining just whimsical enough for the older crowd to stay with it.

The Blu-ray and digital sellthrough versions of the film offer a lot of fun bonus materials relating to the making of the film. Among them are a 14-minute making-of featurette that serves as the primary glimpse behind the scenes. Supplementing this are a four-minute “Tome & Jerry’s World” featurette that presents the making of the film from their point of view, and a four-minute “The Feud” featurette that asks members of the cast and production team which of the duo they root for. Delving into the world of the film are a five minute “Inside the Wedding of Ben and Preeta” that is presenting like a reality show covering the extravagant wedding; a four-minute “Jerry’s ‘A House for a Mouse'” video that shows off how Jerry has adapted human objects to construct his home (salt shaker for a shower, cell phone for a TV, slipper for a bed, etc.), also presented like a reality show; and the five-minute “Guide to New York City Wildlife,” which profiles the various cartoon animals in the film.

There are also two “Scene Comes to Life” featurettes, with a five-minute look at the making of the wedding, and four minutes about when Tom and Jerry are locked up at the animal control facility.

Rounding out the package are a three-minute gag reel, and 13-minutes of deleted sequences with an introduction by director Tim Story. Most of the deleted material offers more background information on the characters, including an unused opening sequence of Tom and Jerry’s history together. The DVD version includes just the gag reel.