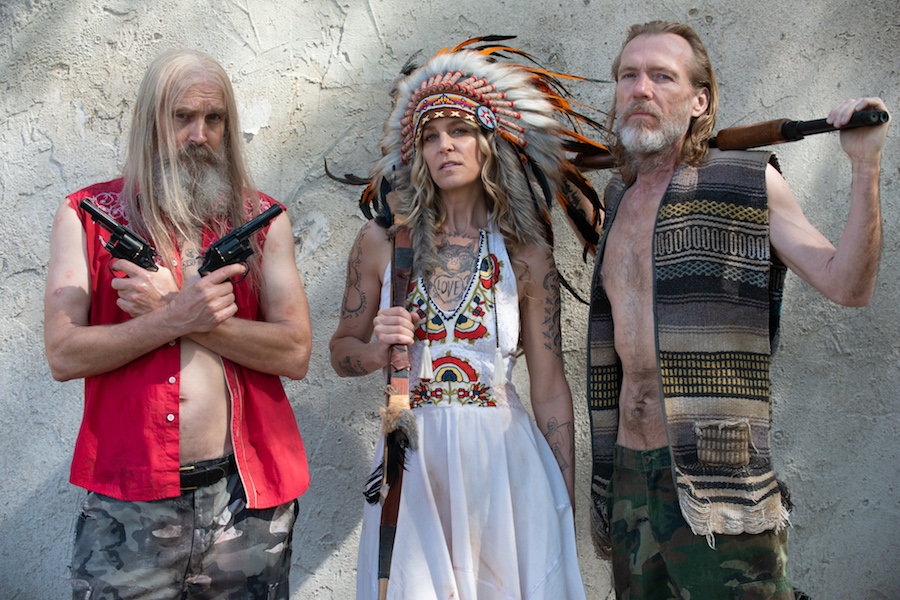 Writer-director Rob Zombie confronted a problem when mounting a new installment in his bloody serial killer series that includes House of 1000 Corpses (2003) and The Devil’s Rejects (2005) — his lead baddies had been shot and presumably killed.

Leave it to Zombie to bring them back from the dead. He came up with the idea of a faux documentary, explaining the miraculous survival of the lead trio.

“I’ve always been obsessed with this one documentary on [Charles] Manson that came out in 1970 I think it was. It’s all real footage. The filmmakers got in there, shot him going out of court, and I thought this is the craziest thing I’ve ever seen. … Serial killers have now achieved this fame, which they always seem to do,” Zombie said in the sequel’s disc extras. “Why don’t we just explain it through this documentary that takes it to a whole other place?

“I thought it’s a good way to explain what happened and make it realistic.” 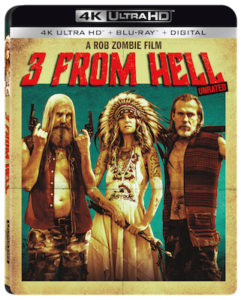 Thus, the revived killers — Baby Firefly (Sheri Moon Zombie), Otis Driftwood (Bill Moseley) and Captain Spaulding (Sid Haig) — make a repeat appearance in 3 From Hell, which debuts on digital and 4K Ultra HD combo pack (plus Blu-ray and digital), Blu-ray combo pack (plus DVD and digital), DVD and on demand Oct. 15 from Lionsgate. Special features include an audio commentary with Zombie and a four-part making-of featurette. Additionally, the 4K and Blu-ray discs feature the unrated cut.

Unfortunately, Haig was sick during filming and appears only in the initial documentary. He passed away in September.

“It became clear that Sid was not physically capable,” Zombie recalled in the featurettes.

Still, the director felt three was the magic number and created a new half-brother in the murderous clan, Winslow Foxworth Coltrane (Richard Brake), to assist in the mayhem. He also explored the progression of the characters: “What would it be like 15 years later with the characters?”

“I didn’t want to just make a sequel,” Zombie said, adding, “I wanted there to be a purpose to doing it. I think a lot of times the sequels that don’t work are the ones that you’re feeding the fans everything they think they want.”

Thus, the crazy Baby is even more off the wall. In fact, her jail scenes are shot in the very prison that the deranged female Manson followers occupied.

“Everything she does is bizarre, even to Otis,” the director noted.

Otis has become an elder statesman in the killing clan, prompting Winslow to continuously attempt to gain his approval.

“Now in 3 From Hell I seem to be the wise old owl of the trio,” said Moseley in the featurettes. “That’s kind of funny and strange. You know, I’m a psychopathic killer.”

Zombie’s horror projects, including 3 From Hell, are unique in tone. “When I look at what people really consider a horror movie, people being shocked in the theater, reacting to the scares, that’s not what we are doing at all,” Zombie said.

“There’s different layers to it,” added Jeff Daniel Phillips, who plays the prison warden, in the featurettes. “It’s not so simple. This isn’t just a horror film. This is a thriller. This is a road picture. There’s a dark comedic thing in it without being a comedy.”

Indeed, the film is an amalgam of Zombie’s passions and experiences that he calls “a post-modern sort of crazy bloody western.”

“I’ve taken all these things I’ve loved my whole life and sort of jammed them together,” he said.

Three for the Road 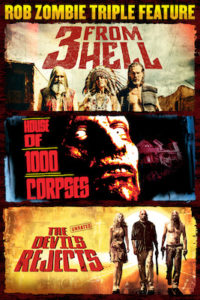 The first two titles in the Zombie serial killer series, House of 1000 Corpses and The Devil’s Rejects, will be included with 3 From Hell in a digital-only triple feature from Lionsgate.

House of 1000 Corpses introduces audiences to the sadistic backwater family as two young couples traveling in Texas to investigate urban legends of murder end up as their prisoners.

In The Devil’s Rejects, the murderous, backwoods Firefly clan takes to the road to escape a vengeful police force.

2 thoughts on “Three’s a Harm in Zombie Trilogy”