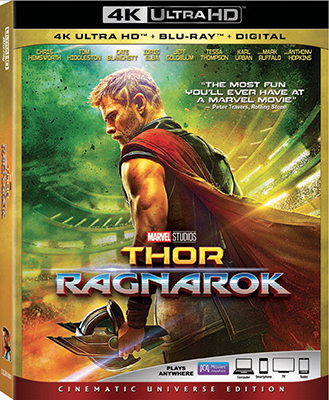 The 17th film in the Marvel Cinematic Universe and the third in the “Thor” franchise, the film teams Thor (Chris Hemsworth) with Hulk (Mark Ruffalo), Loki (Tom Hiddleston) and the warrior Valkyrie (Tessa Thompson) to escape the clutches of the Grandmaster (Jeff Goldblum) in order to return to Asgard to defend his homeland against the threat of Hela (Cate Blanchett), the goddess of death.

Blu-ray extras include an introduction and commentary from Waititi; deleted and extended scenes; a gag reel; the featurette “Marvel Studios: The First Ten Years — The Evolution of Heroes,” a look at the path the Marvel Cinematic heroes have taken to the upcoming Avengers: Infinity War; the exclusive short “Team Darryl,” the third installment of the mockumentary about Thor’s roommate on Earth; 8-bit re-creations of the Sakaar spaceship battle and the final bridge battle in a retro video-game format. Making-of featurettes includes “Getting in Touch With Your Inner Thor,” which explores the vision of director Taika Waititi; “Unstoppable Women: Hela & Valkyrie”; “Finding Korg,” a tongue-in-cheek interview with Waititi about bringing the charismatic Korg to life; “Sakaar: On the Edge of the Known and Unknown,” about creating the film’s junk world and its ruler, the Grandmaster; and “Journey Into Mystery,” which looks at the film’s comic-book origins.

Digital-exclusive extras include additional deleted scenes and the featurette “Evolution of Thor and Hulk’s Bromance.”

Among retailer exclusives available for preorder, Best Buy is offering Steelbook editions of the 4K and standard Blu-ray editions, while Target is packing a 32-page filmmaker behind-the-scenes gallery book with the Blu-ray.