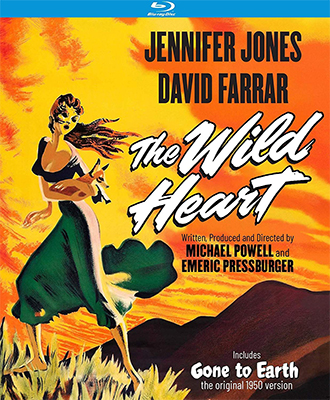 One movie, two edits and three strikes on David O. Selznick, if you ask me.

Kino Classics’ cover art trumpets The Wild Heart, but the perpetually snakebitten Gone to Earth (indisputably the main event here) continues its sorry history by being relegated to adjacent fine print on the same jacket — that is, as a so-called bonus offering. None of this should obscure the fact that we’re looking at a standout Blu-ray release and one I hope to rewatch plural times. But in a word … man. Maybe some sort of contractural obligation mandated this.

In any event, headlining Heart is the universally regarded lesser cut of the most underrated achievement from the great British filmmaking team of Michael Powell and Michael Pressburger — a period melodrama about flaunted adultery that has had to settle for cult status that one suspects is as feverish as its protagonist. And how did 1950’s Earth (in other countries) become 1952’s Heart over here? It was when the editing knife of and ordered reshoots by U.S. distributor Selznick gutted the original cut of nuance so that the Mayberry demographic could understand it better. There’s even a slapped-on opening narration by Joseph Cotten that “Tells Us What We’re About to See” (and I say this as one who could listen to Cotten reading schedule changes at the Cleveland bus station). Selznick’s take further built up the lead performance by his real-life wife Jennifer Jones with more closeups and emphasized footage. This after she’d already delivered one her best performances in the first place.

Adapted from a 1917 novel by Mary Webb and set near the end of the 19th century in the gorgeously rural Shropshire countryside not too far from Wales, Earth was the most successful of screen attempts to give Jones more of an on-screen sexual dimension. The P&P execution of this is much less blatant than it was in two films Jones made with director King Vidor (Duel in the Sun and Ruby Gentry) amid that filmmaker’s so-called “hysterical period,” which also produced Beyond the Forest and The Fountainhead. Basically, Jones’s character here is a naive coffin maker’s daughter and occasional reader of gypsy literature who’s torn between wanting respectability in the community and satisfying normal sexual needs that seem anything but to her oppressively dull Methodist neighbors. On the other hand, Jones does pull off a reckless whopper or two when it comes to behavior. If Selznick’s aborted version gets one thing right, it’s that she really does have a wild heart, albeit one that becomes much more tender when it comes to her pet fox (“Foxy”), which becomes a major plot point. (In the revamped Heart, the fox is visibly stuffed in one key scene, which just doesn’t help anybody.)

This wild dimension is enough to attract a swaggering squire played by David Farrar, a P&P favorite who was also memorable in my favorite of the team’s pairings: Black Narcissus. This guy is not a good dude, which is something apparently well known to the locals — inclined to take whatever he wants no matter the collateral damage. He also partakes enthusiastically in fox hunts, which you can see might lead to no good. But he’s a dashing guy with means (one can see Farrar playing a highwayman in a different kind of period romance), cuts a good figure, and the reciprocated itch he has for Jones is real, even if love is probably beyond his capabilities. Unfortunately, Jones — who respectively juggles physical and spiritual love between two contenders — is first betrothed and then wed to the village’s new minister (Cyril Cusack, looking much, much younger than in his ’60s supporting-actor heyday of The Spy Who Came In From the Cold and Fahrenheit 451). Not that any of this prevents her from acting on her impulses.

I can’t think of many movies that more adeptly mine the tension between the beauty and the brutality of its landscapes, though footage emphasizing the physical milieu is one of the cut version’s key casualties. Credit cinematographer Christopher Challis, who began collaborating with P&P in 1949 and then into the ’50s. Up to this time, Jack Cardiff had been the director of photography most associated with the team’s deliriously expressive Technicolor achievements, culminating in 1948’s The Red Shoes (Challis had been his camera operator). Many regard Cardiff as the greatest color cinematographer ever, but it’s as if he simply handed the baton or threw a lateral pass directly to Challis, who finesses Earth into a visual piece with Cardiff’s work on A Matter of Life and Death, Black Narcissus and Shoes (Georges Perinal shot The Life and Death of Colonel Blimp). It’s inconceivable to me that anyone who loves the overheated emotions of Narcissus and Shoes (and I mean that affectionately) wouldn’t respond enthusiasm to Earth, even though it is not nearly as well known and is, in fact, fairly obscure.

The Blu-ray has two highly compatible commentaries, one for each version. Troy Howarth is far more sanguine than I’d ever be giving the re-edited Heart its due, but he’s an encyclopedia on stars, crew and the ins-and-outs of the second version’s editing process. Speaking over Earth, Samm Deighan designates several preceding P&P titles as close or distant kin to Earth — in particular, 1944’s A Canterbury Tale, which would not have been an obvious guess for me. Deighan’s ambitious analysis is unusual because she alternates between being starchy and (more frequently) chummy, sometimes practically in the same sentence. There’s a lot of depth here, and Deighan seems extremely well versed in the period literary traditions from which this movie springs. Though I disagree with her that Selznick was basically good for Jones’s career. Given the number of times she seemed to be miscast, I think he severely harmed it, especially in later years.

Having both versions here turns the package into an instructive classroom exercise on how to turn a gorgeous grabber into not so much a disaster as a dispiriting shrug-off whose plot points at least “play out” in similar fashion (assuming that’s all you want from a film). The contrast brings to mind  the advice one film critic (I think it was David Edelstein) gave regarding the theatrically released vs. longer expanded DVD edit of Kenneth Lonergan’s Margaret, which was maybe the most written about but least seen great or near-great movie of the 2000-09 decade: Which was that viewers could now begin using the shorter version as a drink coaster. You can’t literally do this here because both versions are on the same disc, but you get my drift.