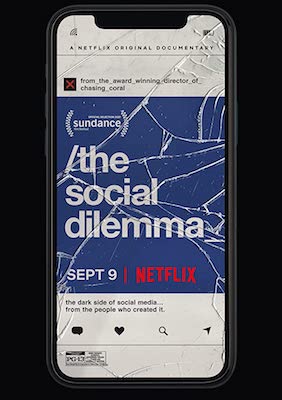 If you’ve got a kid constantly glued to their phone (which is just about every kid), this documentary may be very frightening.

The Social Dilemma, much like another Netflix doc The Great Hack (nominated for an Emmy), explores the insidious nature of social media — and how it may be controlling us. While The Great Hack looked at election manipulation, The Social Dilemma examines how algorithms are attempting to control our minute-by-minute attention — all in order to serve advertisers looking to attract eyeballs — with dangerous consequences.

Through interviews with former employees of the big tech companies and dramatic scenarios, the documentary lays out the case that social media, in its conquest to capture our attention (much like a drug), is manipulating our actions and our very perception of the world around us. To monopolize viewers’ attention, algorithms serve up a warped world that is only designed to do just that — keep us engaged. The content that it delivers is inconsequential to the impersonal algorithm (dramatically portrayed by actor Vincent Kartheiser, who many may remember from “Mad Men”), which doesn’t care how violent, slanted or downright untrue that content is. In fact, the more incendiary or untruthful, the more engaging that content is. All the algorithm (Kartheiser) cares about is how long it can keep a subject’s attention.

The fictional sections of this hybrid doc — in which actors portray the effects of social media — work to dramatize digital control, but not always to a great effect. Some of the scenarios seem a bit overdrawn. Still, the actors help illustrate the real-world implications of social media, and in the case of Kartheiser (playing the algorithm trying to get the actors’ attention), personify the intentions of an abstract concept that many may find hard to understand.

Indeed, it is control that the algorithm wants — control of our time. And, in taking that control, the algorithm pushes our thinking and actions in directions that they might not have gone otherwise.

One of the most shocking moments in the documentary is when a tech exec — who admits to being addicted to social media — says he won’t let his children have screen time.

If social media is so dangerous that its creators won’t let their own children use it, why should we?