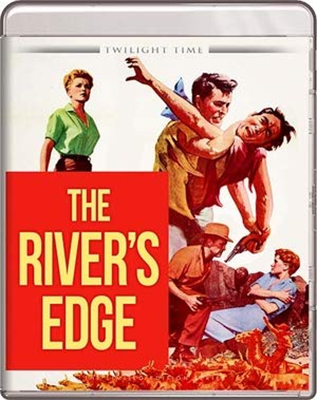 The River’s Edge (with a “The”) hasn’t anything to do with plain old River’s Edge (1986), whose sundry plot points centered on wayward teen slackers, a murder victim and an inflatable blowup doll that Dennis Hopper loves in one undesignated fashion or another. Instead, this earlier near-namesake has other things on mind, but in its own way managed to be nearly as tawdry by the tepid standards of 1957, when I first managed to see it at age 10 on a double bill with Pat Boone’s screen debut in Bernardine. This was the great thing about neighborhood theaters at the time: “It’s OK, mom, we’re going to see Pat Boone, and I know how much you dig ‘Love Letters in the Sand’” (true enough) but failing to add that the co-feature featured an adulterous love triangle and at least one exceptionally blood-soaked killing for its day.

Though it’s tempting to say that director Allan Dwan had been involved in visual communication since the days that people drew illustrations on the walls of caves, his career only went back to 1911, which was still just three years after D.W. Griffith began dabbling in moving images himself. That was a 46-year career up to this point with four more still to go, and though Dwan got mired in “B’s” after directing some higher-profile projects in the 1920s, he did bring enough storytelling distinction with what he was given to become an auteurist figure to ’70s film scholars. Dwan’s Silver Lode (1954), which was late in the game itself, is solid by any standards.

And yes, Edge at least has “elements” of noir — or so say these authors of one of the definitive noir books, even though the picture is in color and often takes place in the wide open spaces during daylight hours. Certain key elements are definitely here, though, including a heavy sexual undercurrent and stolen money that has put one of its principals (Ray Milland) on the lam. Plus a dissatisfied wife (Debra Paget) at the center of two competing males — though in this case she’s simply more dissatisfied than the usual all-out noir “Trouble.” Paget is, however, playing a redhead, which is always a good way to accrue noir-ish bonus points.

In a locale that just as easily could be known as South Hellhole, NM, we begin with what’s presumably this rural route’s only known pink Thunderbird — with its driver/stranger (Milland) asking for directions to find the area’s best known guide (a role played by Anthony Quinn, who had just won his second supporting Oscar in five years, though he took the money and ran here all the same). Living with Quinn on his spread, if that can possibly be the word, is parolee Paget — a marriage that kept her from going back to jail (say, how about a movie about the court system that so ruled?).

Still, despite legitimate feelings for Quinn, she’s had it: he’s nearly gotten badly gored just outside; the kitchen appliances blow up; a scorpion crawls into one of her high heels; and the shower rains mud all over her when she’s trying to look extra nice for her man’s birthday.

Quinn’s place is no efficiency but a trailer whose incredibly shifting dimensions amuse Ursini and Silver (and likely many viewers) to no end. From the outside, using a movie’s screen size as an analogy, it’s about the size of a nickelodeon peep show from around the time Dwan started directing. But if it’s an indoor shot, we (comparably speaking) find ourselves in an Imax frame; it’s like when the screen expands at the beginning of Frank Tashlin’s The Girl Can’t Help It. Be that as it may, Milland shows up carrying a cache of cash (stolen), and the divulgence of some past history emerges. Paget is his former lover and partner in crime (which got her sent to prison), and Milland would like to reclaim her, as well as get Quinn to guide him across the border into Mexico where he hopes to escape with his bounty. Through circumstances having to do with all the dead people who seem to materialize whenever they cross Milland’s path, regretful accessory (and, again, parolee) Paget joins them on the mountainous trek as well.

Milland is the same kind of corrupt smoothie he played in Hitchcock’s Dial M for Murder and is effortlessly superb at it, while Quinn is atypically a nice-guy cuckold instead of his standard force of nature (read: Zorba the Anything). Paget is OK with a couple standout scenes, though she seems to have been foisted on Dwan due to her status as a 20th Century-Fox contract player (she’d been the center of another love triangle between brothers Richard Egan and Elvis Presley just half-a-year earlier in Love Me Tender). This is the kind of movie where you’re in danger of being killed merely by being in the supporting cast; those dispatched include not just a a cave-dwelling rattlesnake but a harmlessly grizzled Western “old-timer” played by Chubby Johnson, who’d previously sat atop the stagecoach with Doris Day during her great Deadwood Stage opening to Calamity Jane.

As if this weren’t exactly the kind of screen entertainment we 10-year-olds wanted to see, there’s also a heavy sexual undercurrent throughout the entire narrative, something that Dwan (per Ursini and Silver) loved injecting into his films — and at his age, no less. When he made Edge, Dwan had recently come off Slightly Scarlet, a tantalizingly lurid James M. Cain adaptation for Edge producer Benedict Borgeaus that featured another redheaded ex-con (Arlene Dahl) lounging around provocatively while sis Rhonda Fleming (redheads, redheads) tried to have Dahl’s back despite the latter’s abject looney-tune-ness. Two decades earlier, Dwan had directed the Shirley Temple version of Heidi, but now he had the kind of material where the big boys played. Oh, Allan, you devil.

Depending on how you feel about marginal The Restless Breed or how adequate or not Dwan swan song Most Dangerous Man Alive turns out to be (I recorded it maybe a year ago off Turner Classic but haven’t gotten to it yet), Edge was not too arguably his last smoothly finessed film, one that always comes up with compelling framing and actor blocking when there couldn’t have been much time or money to help. Interestingly, Dwan lived 20 more years after he retired in 1961, a remarkable achievement — though it’s not so much that he lived to be 96, as impressive as that is. It’s that he lived to be that age despite at one point having directed three Vera Ralston films in a row at Republic — the third a World War II drama where Phil Harris found a way to perform his No. 3 Billboard hit The Thing. Good genes, buddy.