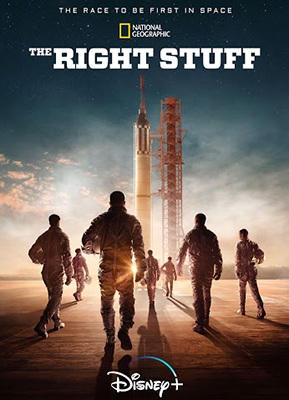 Tom Wolfe’s brilliant 1979 book about the early days of America’s space program, The Right Stuff, and its 1983 film adaptation are held in high regard by space enthusiasts. So this eagerly awaited new series from National Geographic and Leonardo DiCaprio’s Appian Way Productions would have its work cut out for it in terms of meeting the expectations set not just by those earlier projects, but also subsequent space-related re-creations such as Apollo 13 and From the Earth to the Moon.

And for the most part it succeeds as a nice companion to those earlier works, and is an entertaining look at the dedication, determination and motivations of the men who first represented America’s entry into the space race — as well as their foibles.

Right off the bat, it must be pointed out that this is not just a retread of the movie. Of the eight episodes of the show’s first season, Disney+ made the first five available for advance screenings, and from these the most evident difference between the new “Right Stuff” and the original book and movie is that the new version puts its focus entirely on the Mercury program and the seven astronauts chosen to fly the United States’ first manned missions into space, removing the subplots about Chuck Yeager and the other test pilots not recruited by NASA.  (Thus making the show more like William Goldman’s original drafts for the film version, which also excised the Yeager half of the story.)

While the book and movie were more an examination of the derring-do of test pilots that inspired them to fly experimental jet planes at many times the speed of sound, or sit in a tin can atop a flaming rocket they’d have no control over, the series is much more about the personal lives of the astronauts and NASA’s process of preparing for spaceflight.

In that regard, the show comes across more like a conventional period drama, depicting interpersonal rivalries between the astronauts, family drama, and salacious adultery only hinted at in previous depictions of the astronauts’ stories. And to satisfy modern sensibilities, much screentime is given to Trudy Cooper (Eloise Mumford), wife of astronaut Gordon Cooper (Colin O’Donoghue) and a pilot herself with aspirations for promoting including women in the astronaut corps. alongside noted female aviator Jerrie Cobb (Mamie Gummer).

Pushed much further into the background is a very minor subplot that seems to be the origin story of Glynn Lunney (Jackson Pace), a young assistant on the Space Task Group who would become one of NASA’s most distinguished flight controllers during the Apollo program (he’s played by Marc McClure in Apollo 13).

As could be expected, the show plays a bit fast and loose with the timeline of actual events for dramatic purposes, such as showing rocket tests a year before they actually happened. The show also depicts Alan Shepard in 1960 dealing with the early stages of his Ménière’s disease, a disorder of the inner ear that causes dizziness and hearing issues, when most accounts suggest he didn’t begin to experience it until 1963, well after he made his suborbital flight as the first American in space on May 5, 1961. For the most part, though, the show does a good job depicting incidents that haven’t been covered much before.

What’s clear is that in putting more of a spotlight on the astronauts, that the series is drawing inspiration not just from Wolfe’s book, but also the variety of tomes about the space program that have popped up in the past 30 years or so. A scene of John Glenn (Patrick J. Adams) lecturing his fellow astronauts about minimizing their womanizing for the sake of the program’s public relations seems to come straight from his autobiography.

This expansion of source material should help if the show continues for multiple seasons, when it would reportedly focus on later aspects of the space race, such as the Gemini program and the Apollo moon landings, that went beyond the scope of Wolfe’s original book.

The first two episodes of “The Right Stuff” become available on Disney+ Oct. 9, with new episodes weekly after that.