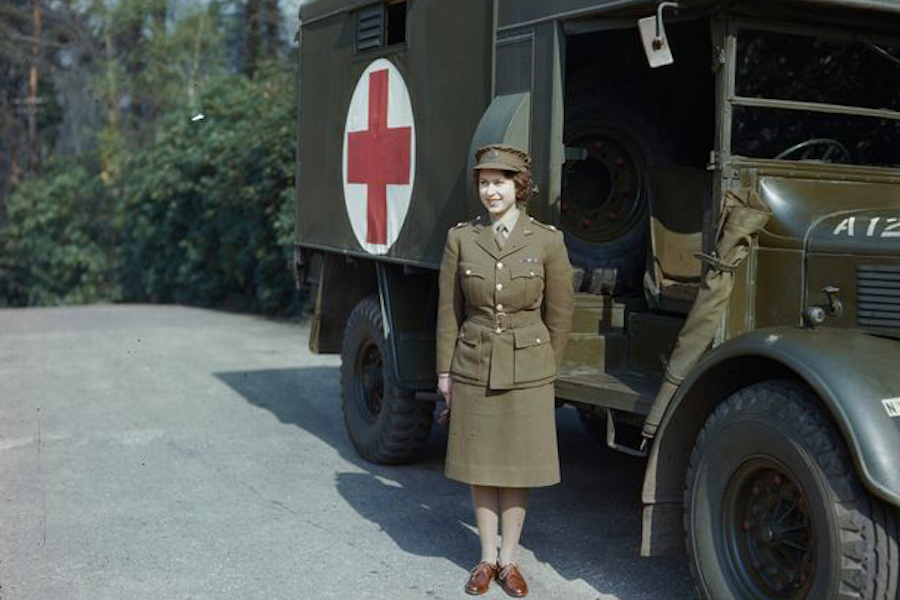 The Queen at War

PBS Distribution in May is bringing an array of “Walter Presents” titles to the PBS Masterpiece Prime Video Channel, along with the documentary The Queen at War.

The channel is $5.99 per month with an Amazon Prime or Prime Video subscription.

Available now is The Queen at War, examining Queen Elizabeth’s childhood as she endured WWII and how her actions impacted England as a whole. Narrated by Phyllis Logan (“Downton Abbey”), viewers take a look at Britain’s longest reigning monarch in history. The documentary offers a fascinating look at how Princess Elizabeth, just 13 years old when World War II broke out, was set on her life’s path to become a legendary monarch. Together with sister Margaret, the young princesses became symbols of hope for a nation wracked by a horrific war, the terrors of the Blitz and the relocation of over a million children. By 1945, Elizabeth had been transformed from a shy girl into a confident young woman and proved her mettle as a driver and mechanic in the women’s branch of the army. She was also already in love with the handsome naval officer she would one day marry. Told through the reminiscences of friends, including Lady Glenconner, royal biographers Christopher Warwick, Robert Lacey, Jane Dismore and Hugh Vickers, among others, the documentary features rare footage of the Queen’s war years culled from private and public collections.

“Walter Presents” is introducing new content on the streaming service in May, including new seasons of “Thicker Than Water,” “The Teacher,” “The Blood Pact” and “Inspector Falke.”

Available is the second season of the Swedish drama “Thicker Than Water” that picks up two months after the three Waldemar siblings have completed running the guest lodge for the summer. Having fulfilled their mother’s last wishes, the siblings decide to close the lodge for the time being. Oskar wants to re-open the lodge for the winter season, but isn’t sure he can do it on his own since his family has left him. Jonna is in London pursuing her acting career, but when she realizes nothing is going to come of it she decides to go back to the island to help Oskar with the lodge. Lasse is back in Stockholm trying to get his next business venture up and running, but no one wants to invest. In an act of desperation Jonna asks Lasse to come back to the island to help her and Oskar make sure the lodge is ready before the guests arrive for the holidays.

Also streaming is season two of the Polish crime thriller “The Teacher.” The series returns delivering answers and perhaps even closure from open questions left at the end of season one. Embarking on a new gripping storyline, teacher Paweł Zawadzki aka “The Teach” finds himself forced to take up a new job at an elite high school in Wroclaw. A few days after he begins, a tragic event takes place at the school — leaving many questions, but no answers. As he begins to investigate, Paweł discovers that the school’s prestigious facade may be a deceptive illusion. For this is no ordinary school, and these are not ordinary students — a murderous game is being played and the new teacher is there for a reason.

Streaming beginning May 22 is season two of the Dutch crime thriller “The Blood Pact.” One year has passed since Marius and Hugo shot Wally. They had agreed to limit their communication and contact, but fate has other plans. Their lives end up tangled again — this time messier than the first. Hugo’s older daughter Laura is dating a man twice her age who Hugo doesn’t approve of, Marius’s wife Kitty has finally fulfilled her dream of opening a restaurant but is having financial issues, and a gangster, Ron, is blackmailing Marius. When Hugo and Marius decide it’s safe enough to move Wally’s body, everything starts to go south.

Finally, streaming beginning May 29 is season two of the German crime drama “Inspector Falke.” Although Inspector Thorsten Falke is a devoted police officer taking down criminal gangs across the city of Hamburg, he has traded his family and social life in the name of justice. The second season of this gritty crime drama sees Falke with a new sidekick, Julia Grosz, as they’re thrown in the deep end to figure out if xenophobia is the motivation behind a gruesome murder. When the body of a Persian engineer is found at a local gas extraction plant in a small town, the investigation is stunted when the inhabitants of the town start behaving strangely.