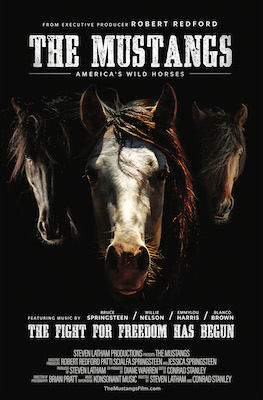 Beautifully shot in America’s sparsely inhabited landscapes, The Mustangs: America’s Wild Horses chronicles the history and current state of wild horses in the United States. Executive produced by Robert Redford, Patti Scialfa Springsteen and Jessica Springsteen, the feature takes audiences to places few people have seen, where more than 80,000 mustangs live on federal land. The film, featuring music by Bruce Springsteen, Willie Nelson and Emmylou Harris with an original song by Blanco Brown, showcases the steeds galloping free across hills, meadows and valleys in a series of glorious panoramas that complement the beauty of the animals. It explores the inspirational nature of the mustang, from its namesake automobile to its role as a companion for “The Lone Ranger.”

While tracing wild horses’ history of faithful service, the feature also covers their exploitation. Once captured for “free energy” to pull plows and trolleys, the mustang also traveled to serve the French and British during World War I. But when the horse gave way to the machine, mustangs were slaughtered for feed and dog meat until their numbers were depleted.

The documentary follows the efforts of those who worked to save and preserve the mustang, chronicling the story of Velma “Wild Horse Annie” Johnston, who advocated for the wild horses with the help of a children’s crusade. In 1971, Nixon signed a law to protect them.

Now, under the jurisdiction of the U.S. Bureau of Land Management, the mustang population — with no natural predators — has grown too big for its prescribed area. The documentary looks at various programs and volunteers trying to help, following a band of women chasing the mares to distribute birth control and traveling to a sanctuary in San Luis Obispo, Calif. In one of the most affecting segments, the documentary visits “Operation Wild Horse,” which pairs veterans with mustangs as restorative therapy. The feature also follows “Mustang Makeovers,” in which trainers are given 100 days to tame a mustang for competition and sale at auction, capturing the bond each trainer has with a horse that they must ultimately give away.

Shots of the free-ranging herds are a treat for lovers of horses and the Wild West, very effectively making the case for the mustangs’ conservation (though segments about their exploitation may not be appropriate for children). Ultimately, The Mustangs: America’s Wild Horses, which shines a light on a little-known issue, manages to both inspire awe as well as a call to action.