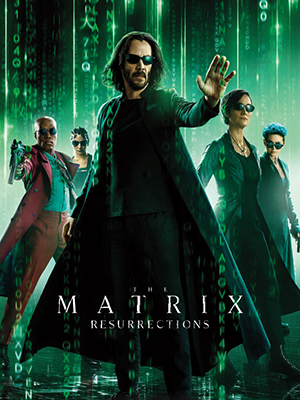 At the end of the third movie in 2003, Neo and Trinity (Keanu Reeves and Carrie-Annie Moss) seemingly sacrificed themselves to bring peace between the remnants of humanity and the machines that sought to enslave them. Resurrections opens with the idea that the original story might have been a video game created by Thomas Anderson (Keanu Reeves). Then word comes down that his gaming studios’ parent company, Warner Bros., wants a fourth “Matrix,” and will do one with or without the original creative team. This is pretty much what happened in real life when the studio starting planning for a reboot of the franchise before director Lana Wachowski and Reeves signed on. So Resurrections is a bit of a tongue-in-cheek title referencing both the return of the characters thought killed off, and the long-dormant franchise itself.

Matrix Resurrections is entertaining in parts and has some intriguing ideas, but future movies will have a lot of heavy lifting to do to prove there’s still life left in the franchise beyond running in circles.