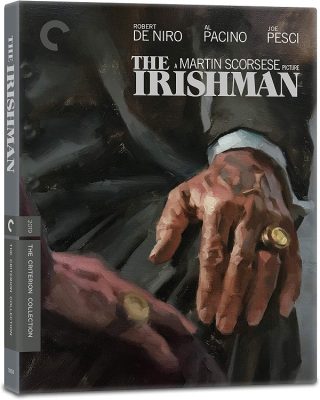 Lest anyone accuse Martin Scorsese of glamorizing gangsters, he presents The Irishman, a screed against the criminal lifestyle.

The film is based on the 2004 book I Heard You Paint Houses, a recounting of the life of mafia hitman Frank Sheeran, the man who claims to have killed Jimmy Hoffa, the union boss whose disappearance in 1975 became one of the 20th century’s great mysteries.

The subject matter is fodder for Scorsese, who assembles a cast of mob-movie all-stars to deliver another highly entertaining trip into the inner workings of the criminal underworld. This includes usual Scorsese collaborators such as Robert De Niro and Joe Pesci (who was coaxed out of retirement to appear). It is somehow also the first teaming of Al Pacino with Scorsese despite both being famously associated with the mafia movie genres.

The film, which earned a slew of Oscar nominations after debuting on Netflix in 2019, is lengthy at three-and-a-half hours, but is briskly paced enough to hold one’s attention. Of course, the nature of home video also allows viewers to pause the movie whenever they want, giving Scorsese plenty of leeway to indulge himself.

De Niro stars as Sheeran, the ‘Irishman’ of the title, a truck driver who gets drawn into the mafia as an enforcer. He eventually becomes a trusted ally of Teamster president Hoffa (Al Pacino), a friendship that comes to a head when Hoffa’s actions run afoul of the mafia’s leadership.

The extended running time not only allows the audience time to get to know the characters, but it also allows Scorsese to hone in on an aspect of criminal life that wasn’t central to his earlier works in the genre: What happens to the violent gangsters who manage not to get killed and end up growing old? Was their life of crime still worth it once they realize what they had to leave behind to achieve it?

As if to carry the point home, Scorsese makes a point to pause the introductions of several minor characters to display an on-screen graphic describing their fates, which usually involves a horrific, violent death.

On the subject of aging, the film famously made extensive use of de-aging visual effects software in order to allow the elderly stars to play the younger versions of their characters since the film spans several decades. Scorsese in the Blu-ray’s bonus materials says the technology was vital to his deciding to direct the film, as he didn’t want to have to cast younger actors for the earlier scenes and only work with De Niro for half the movie. The results are subtle if not always perfect, but they don’t hamper the effectiveness of the film at all.

Because of the film’s length, Criterion has made the Blu-ray of The Irishman a two-disc set, with the entirety of the movie presented as the only content on the first disc. All the bonus materials are on the second disc and they do a good job of taking viewers behind the scenes of the film. Both discs come in a handsome fold-out slipcover with some beautiful painted artwork of De Niro and Pacino, plus a booklet with an essay about the film.

In addition to the film’s trailers, the extras include a 36-minute “Making The Irishman” featurette that covers all the aspects of the production.

Film history fans will get a kick out of the 19-minute “Table for Four” featurette, a roundtable conversation between Scorsese, De Niro, Pacino and Pesci as they discuss their careers and how they came together for this movie.

Also interesting is the 21-and-a-half-minute “Gangsters’ Requiem,” a video essay about the evolution of Scorsese’s career and how his previous works are reflected in The Irishman.

The film’s visual effects techniques are expanded upon in the 13-minute “The Evolution of Digital De-Aging as Seen in The Irishman” featurette, which was originally a Netflix promotional piece.

Finally, there are a couple of archival videos that the filmmakers used in re-creating historic events: a six-minute interview with an elderly Sheeran, and a 17-and-a-half minute news profile of Hoffa by David Brinkley in 1963.