NEWS ANALYSIS — Since its launch a week before Disney+ last year, Apple TV+ has struggled to achieve support in the media and among online observers. Despite its corporate parent’s record market valuation ($2.1 trillion!) this week, Apple TV+ is often viewed as an underwhelming missed opportunity.

Apple TV+ is seen as having the worst-quality content (60%), the least amount of variety (64%) and the most unfriendly user interface (64%), according to a recent Flixed.io survey of 1,300 respondents. By comparison, respondents hailed Netflix for the best content quality (89%), content variety (88%), user interface (85%), and viewing recommendations (69%).

Surprisingly, half of streamers use at least three or more paid video platforms, averaging three hours or more watching content at least five days per week. More people prefer cable TV than Disney+ and Apple TV+ combined. With only 57% of users finding it easy to explore new content, Apple TV+ users spend the most time deciding what to watch on average (16 minutes). 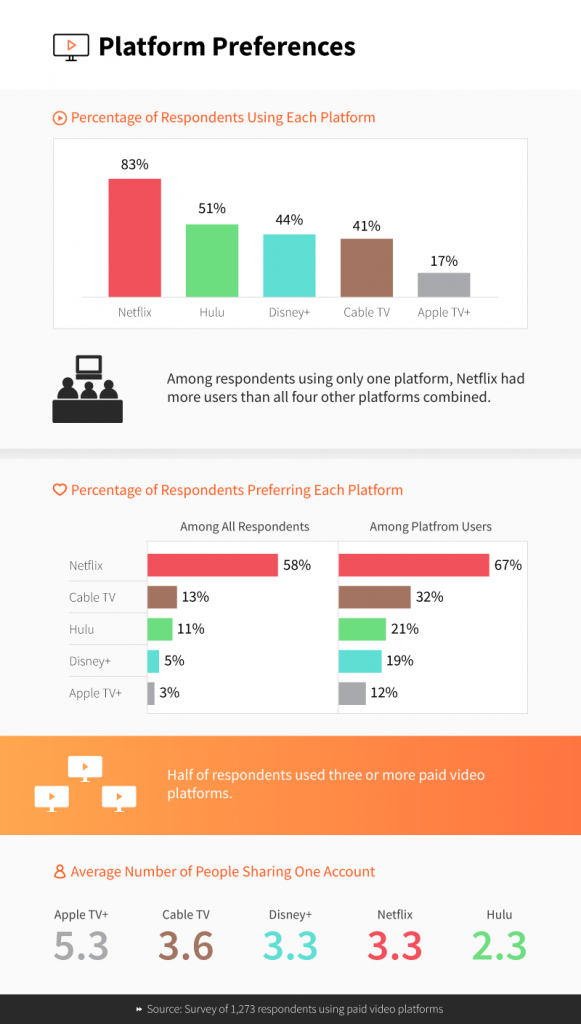 Bernstein analyst Toni Sacconaghi estimates that fewer than 10 million people have signed up for the free 12-month Apple TV+ subscription in the company’s most-recent fiscal quarter. He characterized the tally as “surprisingly low” for a brand as well-known as Apple, which hasn’t officially released any OTT video subscriber data.

Research firm Antenna said Apple realized a 10% spike in new subs from March 14 to 16 as the coronavirus spread in the United States. The firm said the increase was the lowest of any major streaming service.

Apple reportedly will spend $6 billion on original content in 2020, buttressing a slate that currently includes “Dickinson,” “See,” “Ghostwriter,” “For All Mankind,” “Helpsters,” “Hala” and “Little America,” among others.

“[Apple is] still not in [OTT video] with both feet,” media executive Barry Diller told a podcast. “They’ve put some capital in, but relatively little [for Apple]. They’re not making a major effort.”

Wedbush Securities analyst Michael Pachter contends that despite a major marketing effort around Apple TV+, the finished product thus far has been underwhelming.

“Apple TV+ only had a handful of shows at launch and no catalog,” Pachter wrote in a post.

One thought on “The ‘Hits’ Keep Coming for Apple TV+”