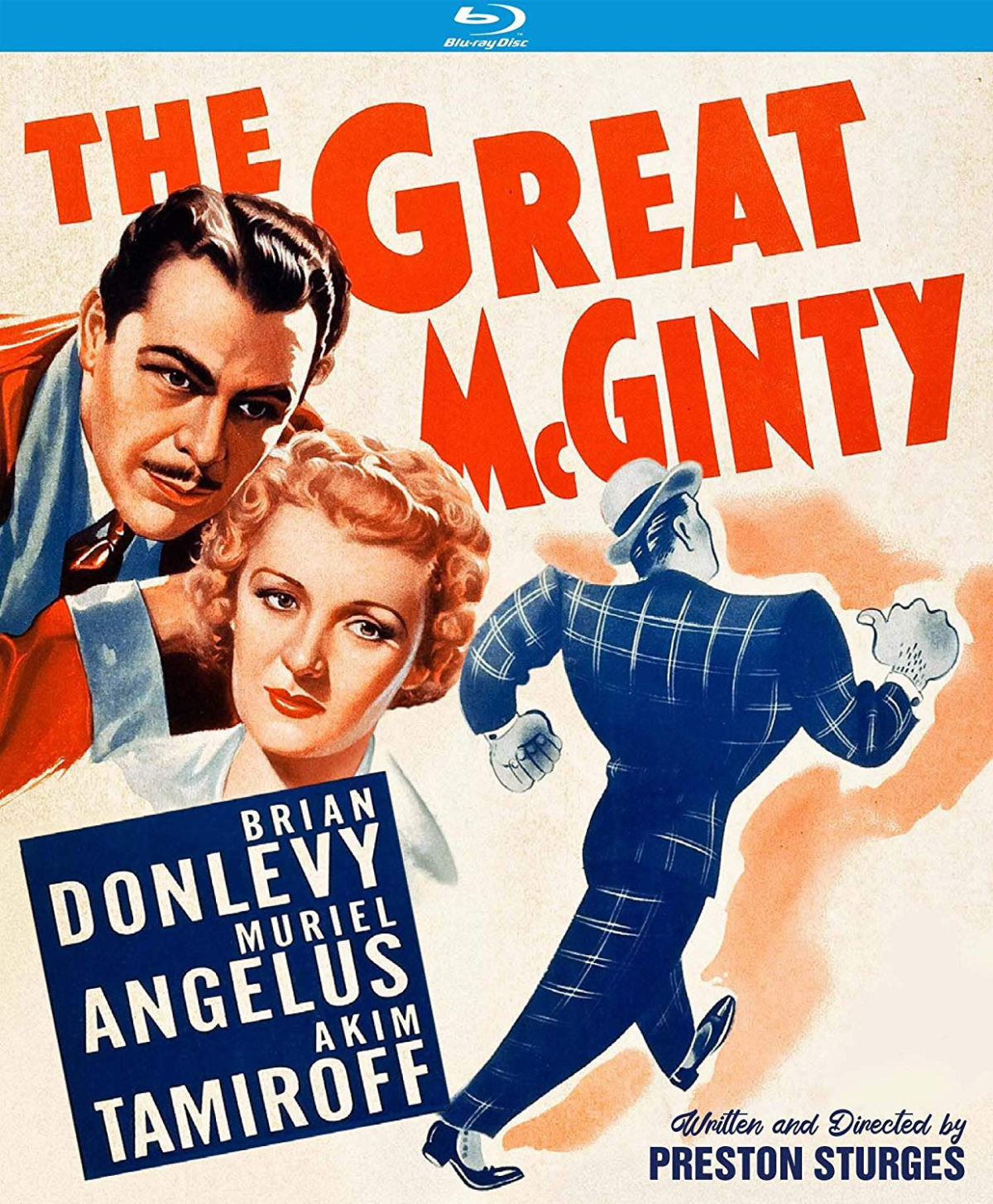 Few traditions are more eternal than political corruption no matter the country in question, and even as we speak, Americans are seeing it in Imax three-camera Cinerama with 96-track stereo sound, just to mix some exhibition metaphors. Thus, it’s a little surprising that it took Hollywood until 1940 to attack the subject as directly head-on as in The Great McGinty — though there had been, just thinking here, some satirical jabbing from The Dark Horse (1932, Warner Bros.). But that one’s release came less than half-a-year before FDR’s first election ushered in a period of the president-as-deity except in certain Alf Landon circles — leading to a subsequent period not conducive to all-out comical skewering, though, of course, played-for-laughs political grifters and grafters were often side-issue mainstays in the Golden Age.

However comparably minor it might be compared to the enduring Preston Sturges masterpieces that were shortly to come, McGinty is nonetheless full-throttle instant auteurism and effortlessly identifiable as a Sturges concoction from just about any 30-second excerpt. (Or if you write about film, and it’s not instantly identifiable, I hear there’s a job opening down the street at my car wash.) As in other Sturges comedies, the fortunes of the central character are inverted almost overnight by a chance or flash occurrence, and his staging of knockabout physical comedy is almost as pronounced as anything you’d see in the silent era. Brian Donlevy and Akim Tamiroff brawling with each other (once in a moving car, no less) isn’t much different in life-attitude from the club-car slapstick mayhem in The Palm Beach Story or William Demarest landing on his behind when trying to kick someone in the pants in The Miracle of Morgan’s Creek.

Anyway, the story behind McGinty, which voiceover commentator Samm Deighan reiterates on Kino Classics’ bonus commentary, is that Sturges, like Billy Wilder and Charles Brackett, was in a “let’s bash Mitchell Leisen mood” at Paramount. Though a lot of today’s historians raise amazed eyebrows over this, these ace writers (who worked predominantly but not exclusively for that studio) supposedly hated what Leisen kept doing or not doing when it came to interpreting their scripts. In McGinty’s case, Sturges supposedly offered to sell Paramount his script for a measly sum (Deighan says $10, though I’ve also heard a buck) if they also allowed him to direct it as well for what would be his directorial debut. When the studio agreed, it was a big deal and not just for Sturges. Shortly thereafter John Huston and Billy Wilder joined him to usher in a new era of the writer-director.

Paramount didn’t have that much to lose. The cast was modest (Donlevy, Tamiroff, the now obscure Muriel Angelus), and so was the budget. Nor was this exactly Leisen’s historical extravaganza Frenchman’s Creek when it came to lush Paramount production design — though even at once, Sturges showed himself to have a camera eye, a definite way with actors and a certain deftness with crowd scenes (this you can also see already as well in the same year’s Christmas in July). Low expectations gave the burgeoning filmmaker the freedom to indulge his love-hate attitude toward American foibles with very little sentimentality, which (as Deighan notes) makes Sturges’ political films seem more contemporary today than Frank Capra’s.

Told in flashback from the banana republic from which he now tends bar, McGinty relates what is arguably the vintage screen’s most telling comic portrayal of ward heeling (though, yes, John Ford’s movie of The Last Hurrah has its moments as well). In an unnamed city that has the “feel” of Chicago, local “boss” Tamiroff hires Donlevy/McGinty as one of many to cast a bogus vote for the local machine’s lackey choice of a mayoral candidate — for the princely sum of $2. Because soup kitchens qualify as his second home, McG overcomes his confusion (the guy is affably dim) and votes 37 times — good not only for $74 but also to show the bosses that he’s an out-of-the-ordinary guy who might fit into the operation. He starts out successfully as heavily pugnacious debt-collecting muscle, though from the example presented does charm at least some of the female victims with a more soft-soap approach.

With his improved fortunes come an upgrade of sorts from a wardrobe best described as “flophouse-traditional” — though at least one of his new-era suits is nearly as sartorially haphazard as anything Spike Jones ever wore, though I suppose it doesn’t quite have the decibel level of those floral prints that preyed on your pollen allergies whenever Roy Rogers donned them during his Trucolor period. Improved fortunes also result in a mostly harmonious arranged marriage to his secretary Catherine, played by Angelus — a London-bred actress who only made a handful of Hollywood films (this was her last before early retirement, not counting a few more years of Broadway appearances).

It’s all for image — women voters supposedly want married candidates — and both sides get something because the bride is a single mom with two young children (a fact she takes a suspiciously long time to divulge, imo). But it works out well because McGinty takes to the children and enjoys, in one amusing scene, reading them the funnies. Somehow, the onetime bum ascends to becoming governor of the state, at which point Catherine’s motherly reformer instincts take over, at which point the picture lingers toward conventionality though not to artistically perilous extremes. But as for McGinty, it becomes a no-good-deed-goes-unpunished situation, which is what you get when you do the right thing for the only time in your life. This is not, getting back to what I noted before, an attitude Capra ever would have voiced, though I can imagine Sturges and Wilder having lunch in the studio commissary and chuckling about how people always vote against their own interests.

Commentator Deighan seems to have done her homework discussing Sturges’ salad days (as opposed his eventual suffering of a shockingly severe artistic and box office declines), but I winced when twice she noted that Tamiroff and Donlevy won Oscars for performances in other films when, in truth, they only received nominations. And speaking of Oscars, McGinty took one for best original screenplay when The Great Dictator and Foreign Correspondent were among the competition — an indicator of just how much this modest box office success (no more) was admired in the industry. Bigger budgets and bigger stars for Sturges would follow, though the actors — peppered with Demarest and a slew of other loony types who’d make up Sturges’ future stock company of regulars — can’t be faulted at all here.

This isn’t a movie with the visual tools to showcase its 4K mastering, but it made for a very satisfying view on my 75-inch screen. Thank you, again, Kino Classics for what you’re doing for the Universal-controlled Paramount library in general (they hold rights to the 1929-49 titles, with a couple exceptions). This library was the last, Goldwyn’s excepted, to sell its titles to TV back in the day (in my local market, it was fall of 1959). It held Holy Grail status for on-the-ball film fans then, and for a long time history was repeating itself until not long ago. Now, it’s an embarrassment of riches, with Kino having just announced Beau Geste, The Lives of a Bengal Lancer and more for April 7 alone (I think Murder, He Says might be in there, too).