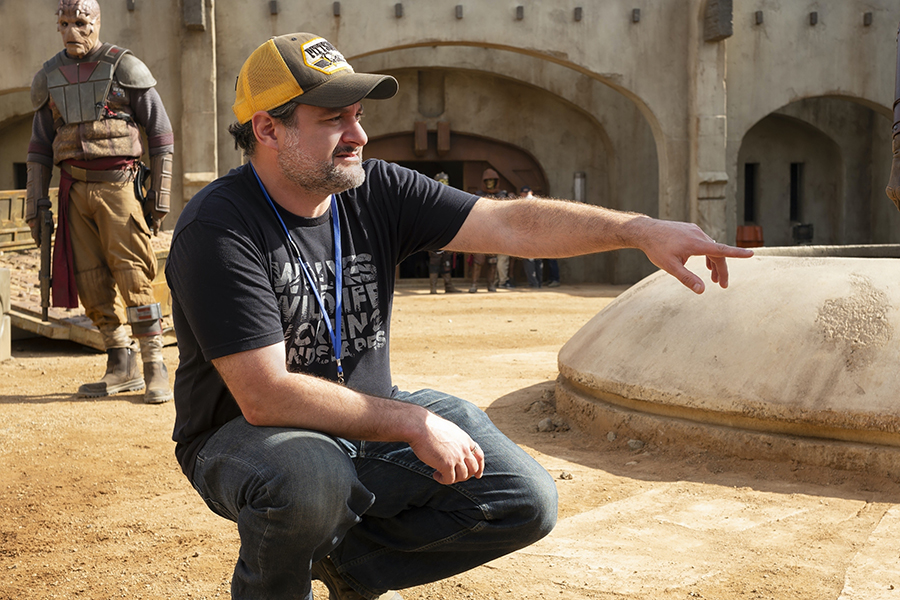 Dave Filoni on the set of the Disney+ "Star Wars" series "The Mandalorian."

The week of “May the 4th Be With You” has been a banner one for Dave Filoni, the longtime animation veteran who is now one of the leading creatives of “Star Wars” content over at Lucasfilm.

Monday, May 4, marked the triumphant finale of “Star Wars: The Clone Wars,” the CG-animated series executive produced by Filoni that was given a chance by Disney+ to finish storylines that were abandoned after Disney bought Lucasfilm in 2012 and canceled the series.

Filoni later went on to earn praise from “Star Wars” fans for producing the likes of “Star Wars Rebels” and “The Mandalorian,” the latter alongside noted fanboy filmmaker Jon Favreau.

Having worked with George Lucas since before “Clone Wars” debuted in 2008, Filoni is something of a creative bridge between the Lucas and Disney eras of “Star Wars.”

In the first episode of the new Disney+ behind-the-scenes series “Disney Gallery: Star Wars — The Mandalorian,” which premiered May 4, Filoni talked about learning about live-action filmmaking from Lucas and applying those ideas to animation. All he expected from his initial meeting about doing a “Clone Wars” show was a story he could tell in line at Revenge of the Sith about being in a room as George Lucas ruminated to him about the zen philosophies of the Jedi. Filoni ended up getting the job, implying it had something to do with Lucas enjoying his work on “Avatar: The Last Airbender.”

Yet when it came time to craft the sequels to Lucas’ films, the new regime turned to J.J. Abrams, not Favreau or Filoni. The new films have mostly divided fan loyalties over the creative direction of a franchise that seems to be in serious need of a producer along the lines of Marvel Studios’ Kevin Feige who can oversee the coherence of the shared universe, an element that was noticeably absent from the recent sequel trilogy.

In the second episode of “Disney Gallery” that premiered today (May 8), Filoni delivers a soliloquy that should cement his status as the person who should fill that role. In it, he analyzes a key plot point from 1999’s Star Wars: Episode I — The Phantom Menace from an angle many fans may not have approached it from before.

The “Disney Gallery” series features Favreu, Filoni and other filmmakers involved with the show and “Star Wars” engaged in a series of roundtable discussions about their approach to the material. At one point, the discussion turned to the nature of storytelling in the “Star Wars” universe.

“The prequels I thought were almost an impossible task,” Filoni says. “How do you tell the story that we’ve all grown up with, imagining who Anakin Skywalker was? You saw so many things in The Phantom Menace that you had just imagined, like the Jedi Council, and none of it really was what I had expected, but I know now that’s just like how creative George is, he just sees it differently.”

Filoni focuses on the climactic battle between Jedi Qui-Gon Jinn and his apprentice, Obi-Wan Kenobi, with Darth Maul, an agent of chaos working for the Sith Lord who would eventually become Emperor Palpatine.

“I love the lightsaber fight with Darth Maul, not because it’s a lightsaber fight, but because George is so good at crafting why that fight’s important,” Filoni says. “In Phantom Menace, you’re watching these two Jedi in their prime fight this evil villain. Maul couldn’t be more obviously the villain, he’s designed to look evil.”

Filoni compares the emotional stakes of the battle with that of the fight between the older Obi-Wan and Darth Vader in the 1977 original movie before continuing.

“What’s at stake is really how Anakin’s going to turn out,” Filoni says. “Because Qui-Gon is different from the rest of the Jedi. You get that in the movie, and Qui-Gon is fighting because he knows he’s the father that Anakin needs, because Qui-Gon hasn’t given up on the fact that the Jedi are supposed to actually care and love, and that’s not a bad thing. The rest of the Jedi are so detached, and have become so political that they’ve really lost their way, and Yoda starts to see that in the second film. But Qui-Gon is ahead of them all. That’s why he’s not part of the Council.”

Filoni then references “Duel of the Fates,” composer John Williams’ signature track written for Episode I.

“So he’s fighting for Anakin, and that’s why it’s the ‘Duel of the Fates,’ it’s the fate of this child. And depending on how this fight goes, Anakin is going to, his life is going to be dramatically different. So, Qui-Gon loses, of course. … He knew what it meant to take this kid away from his mother, when he had an attachment, and he’s left with Obi-Wan.

“Obi-Wan trains Anakin at first out of a promise he makes to Qui-Gon, not because he cares about him.”

Filoni points out that when Obi-Wan first hears about Anakin, he considers him a distraction in the same vein as Jar-Jar Binks, and thinks trying to save the boy from slavery is a waste of time. In that sense, Obi-Wan shares the detachment from empathy that Qui-Gon worries has engulfed the Jedi Order.

“So he’s a brother to Anakin, eventually, but he’s not a father figure,” Filoni says. “That’s a failing for Anakin. He doesn’t have the family that he needs. He loses his mother in the next film. He fails on this promise that he made, ‘mother I will come back and save you.’ So he’s left completely vulnerable. And ‘Star Wars’ ultimately is about family.

“It’s everything the entire three films of the prequels hangs on, is that one particular fight.”

At that point, Maul’s role in the story has been fulfilled as disposable tool of the Emperor, who then turns his attentions to Anakin, eventually manipulating Anakin’s sense of loss to turn him into the evil Darth Vader by filling the fatherly void in Anakin’s life.

Filoni then turns to 1983’s Episode VI: Return of the Jedi, and the scene where Luke is tempted to join the dark side by killing the Emperor out of anger.

“The only thing that’s going to save Luke is not his connection to the Force, it’s not the powers he’s learned. It’s not all these things that are an advantage to him,” Filoni says. “That’s gotten him to the table. But what saves Luke is his ability to look at all that, and look at his father and say no, I’m going to throw away this weapon, I’m not going to do that, I’m going to let that go and be selfless. And he says ‘I’m a Jedi like my father before me,’ but what he’s really saying and why we connect, why I connect so powerfully to it is he’s saying ‘I love my father, and there’s nothing you can do that’s going to change that.’ And the Emperor can’t understand that connection. Why wouldn’t you take from the power of the galaxy? Why won’t you take this?

“And Anakin, in that moment, has to decide to be the father that he’s never had. He has to give up all the power in the galaxy and save his son. And that’s the selfless act that he does in return for his son. And that’s what saves him in turn. So the son saves the father, the father saves the son and it works out perfectly, and I draw that line all the way from The Phantom Menace to Jedi. That’s the story of ‘Star Wars.’”

The example, Filoni says, is emblematic of the core values that all “Star Wars” stories should strive for.

“It’s all part of the fated arc. It’s all part of why it works and why we care,” Filoni says. “It’s not about X-Wings. It’s not about all these things we decorate ‘Star Wars’ in. It’s important, it’s part of the genius of it, but we soulfully react to it. We don’t just want an action movie, we want to feel uplifted. And ‘Star Wars’ is an adventure that makes you feel good, you know?

The ultimate lesson, Filoni says, is one he learned directly from Lucas.

“Remember to make these stories hopeful,” Filoni says, channeling his mentor’s words. “Remember to give that to kids because they really need it.”

After that kind of insightful analysis, is there any doubt that Filoni isn’t the true heir to the creative legacy of “Star Wars”?