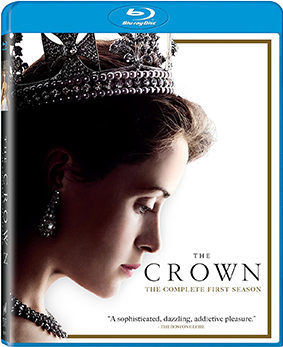 The excellent first season of Netflix’s “The Crown” highlights the often tumultuous lives of Britain’s royal family and their role in a government that has no practical need for them yet still turns to them for a sense of national identity, continuity and unity — rendering their role as symbolic enough to be essentially powerless, yet demanding of them a piety that may as well strip them of their humanity.

The show was created by Peter Morgan, who previously wrote 2006’s The Queen, in which Helen Mirren played Elizabeth II in 1997 around the time of Princess Diana’s death. Many of the themes and settings touched upon in that film are expanded upon here.

“The Crown” starts almost like a sequel to The King’s Speech, with Jared Harris (“Mad Men”) playing King George VI, who was played by Colin Firth in the film that depicted his own early reign. The show picks up in 1947, with the wedding of Elizabeth (Claire Foy) and Philip (Matt Smith of “Doctor Who” fame).

Of course, Elizabeth doesn’t become Queen until 1952, so there’s plenty of time to introduce the family dynamics that will come to define the show. Philip, for example, begins to resent being subservient to his wife, to the point where he can’t even give his last name to his children (not that Philip really had a last name, since he was basically an exiled Greek prince who grew up in Germany and the United Kingdom and adopted the surname of an English relative so he could marry Elizabeth to begin with). Her status as the future monarch is, understandably, more important to the stuffy English bureaucrats who surround the palace than any concerns he may have.

There’s also Princess Margaret, who while technically is second in line for the throne (before Elizabeth’s children are born) is basically treated as a disposable royal, which contributes to her having somewhat of a rebellious attitude, as she is expected to project the prim and proper air of royalty without being allowed to take advantage of its trappings (aside from fabulous wealth and life in castles, that is). This comes into play when she is blocked from marrying her lover, a divorced pilot whose involvement with the princess is frowned upon for both religious and social reasons.

Margaret’s romantic troubles tie her, at least thematically, to her uncle, the former King Edward VIII (Alex Jennings), who famously abdicated the throne in 1936 over his love for a woman the government and family disapproved of (paving the way for his brother, George VI, and eventually Elizabeth II, to rule). Now several years removed from the throne and enjoying the social engagements of a worry-free life, Edward complains about being shut out from the family while demanding more money to maintain his lifestyle.

To the family, Edward choosing love over duty is seen as incredibly selfish, drawing the ire of his mother, Queen Mary, for putting too much stress on her younger son in carrying out his duties as king, a destiny he was not faced with until much later in life. (Being forced to serve in the role during World War II didn’t help, though more details on that unfold in the second season.)

As a result, George VI has turned to chain smoking, leading to lung cancer and an early death. The show doesn’t shy away from his deterioration, including the depiction of a surgery to remove a lung ravaged by the disease, with doctors setting up an ad hoc surgical bay in the palace.

One aspect the show nails is the fine line the royals must walk between their duties as government figureheads and trying to maintain their humanity and dignity through it all. This is especially true during the transition between George to Elizabeth, who is on an African safari when she receives the news that she is now the queen. On the one hand, she’s a 25-year-old woman whose father has just died, and her grief is understandable. But how much of her ability to mourn is subsumed by the relenting pressures from parliament and tradition to carry on and put on a show for her subjects? This is an issue that almost every monarch must deal with.

Elizabeth’s youth, then, leans into the central contrast of the season, as her first prime minister is the aging Winston Churchill (John Lithgow) in the waning years of his political life. “The Crown” clearly admires Churchill’s political skills, and in many ways his stature has made him just as much a symbol of Britain as its monarchy, though the show is certainly not willing to canonize him. He is depicted as arrogant and aloof in his later years, showing little concern for the plight of citizens during a deadly smog attack on London, and becoming especially difficult when asked to pose for a formal portrait to commemorate his many years of service. Lithgow is outstanding in the role and his Emmy for it comes as little surprise.

The plan for the show is reportedly to spend six seasons depicting the reign of the queen, with new actors in the key roles every two years as the characters are aged up. The recently released second season (on Netflix) would thus conclude the run of the original cast, and their replacements for season three are already being announced. While it’s still early to look toward the final years of the show, it will be interesting to see if they can lure Mirren back into the role to bring the queen’s story full circle.