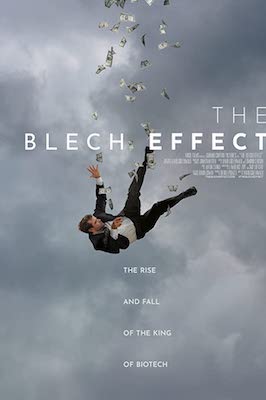 Spectacular highs and lows are the stuff of great stories, and the true tale of investor David Blech spans both — fantastic financial gains and incredible losses.

The documentary The Blech Effect: The Rise and Fall of the King of Biotech chronicles the journey of man known for starting multiple biotech companies that have helped countless people and generated enormous wealth. As Blech himself admits in the film, if only he were in a coma for the last 15 years, he would be a multi-billionaire. Forbes Magazine once pegged his worth at more than $300 million, and he was on the Fortune 400 list. He became known as the “King of Biotech” and his influence on the market coined the term “The Blech Effect.”

But he couldn’t hold onto it. Bipolar disorder and a gambling addiction — what Blech terms a “manic push” — kept him constantly looking for the next big thing.

“When you do things that are outrageous, outrageous things happen to you,” Blech says in the film, calling his life a cautionary tale.

The documentary catches up with Blech at a low point, $11 million in debt, struggling to keep his family afloat and awaiting a jail sentence for his latest hijinks on Wall Street. His wife also struggles to keep him from spiraling into depression, as she looks after their son, who has been developmentally disadvantaged since birth. At one point, Blech notes that every time he sees one of those ubiquitous Cialis commercials, he is reminded of one of the companies he fostered and the money that eluded his grasp — money that could help him stay in his apartment and take care of his wife and son.

Blech is looking for another big score with a company working on an Alzheimer’s drug that might just solve all his problems. Viewers experience the hope and anxiety about its success along with the couple — offering a taste of the rollercoaster ride Blech has been on much of his adult life.

Will it be the success that gets him out of the jam he’s in or will he have to face ultimate failure?

Ultimately, The Blech Effect, like a classic tragedy, celebrates the talents and pride of its hero while revealing his fatal flaws. The fact that Blech ultimately comes to terms with his fate — and his responsibility for it — gives the story an added poignancy.