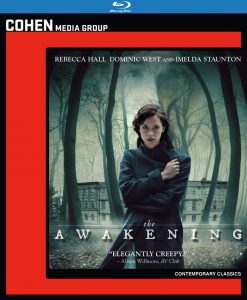 The Awakening is a 2011 mystery about the death of a child at a boarding school. When the death is blamed on a ghost, hoax exposer Florence Cathcart is certain that science and reason can explain it. But the truth she discovers is more terrifying than she could ever imagine, and soon the ghost hunter becomes the hunted. Starring Rebecca Hall (The Town), Dominic West (The Wire) and Imelda Staunton (Harry Potter films), The Awakening is filled with haunting twists.

Casanova, Last Love is the latest romantic period piece from director Benoit Jacquot (Farewell, My Queen). Set in 18th century London, the film is centered on Casanova (Vincent Lindon), famous for his taste of pleasure and gambling. Exiled from Paris, Casanova in this city he knows nothing about meets on several occasions a young prostitute, Marianne de Charpillon (Stacy Martin). She attracts him to the point he starts disregarding all other women. The legendary seducer is ready to do anything to get her, but Charpillon always escapes under various excuses. She challenges Casanova: “You will only have me if you stop desiring me!”