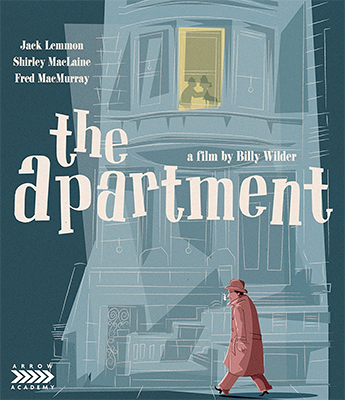 When it comes to my personal choice for best/favorite Billy Wilder movie, I usually zig-zag among Double Indemnity, Sunset Boulevard, Ace in the Hole and The Apartment — though let it be noted in the name of Joey Bishop that my strongest emotional attachment goes to Kiss Me, Stupid (absolutely and eternally) and Stalag 17 (probably in second place due to how much I loved it as a youngster, particularly in the mail call scenes: “At ease, at ease”). But re-savoring The Apartment in Arrow’s new limited edition and absorbing the bonus backgrounders both new and recycled from a past release, it’s tough to deny the perfection of 1960’s best picture Oscar winner all the way down the line, which in Wilder’s case, always extended to the care he took with, say, the 125th-billed actor.

And though topicality can be a trap when gauging a movie’s effectiveness due to how today’s dominator of news can eventually turn into tomorrow’s LP of Anita Bryant’s Greatest Hits, it’s a real punch to the face (and here, I mean this in a good sense) to see how a once controversial comedy-drama from 58 years ago can be so spot-on about sexual harassment in the work place. This, of course, is an issue not likely to fall prey to topicality limitations, so when we take a fresh jaded look at the comical sleazeball execs who populate the story’s Manhattan-based insurance company — and with its big boss the worst offender of all — there’s simply no way anyone can deny that the movie is more potent than it even was at the time.

Interestingly, especially in view of its commercial success with a public that “got it,” the picture got mixed reviews when it opened in the summer (Psycho, The Apartment and Kazan’s Wild River all opened in close proximity; ponder that the next time you deny that movies have gone to hell). Critically speaking, Pauline Kael got tiresomely huffy about it, but in truth — and in retrospect, this probably isn’t very surprising — it was her male colleagues who were predominantly offended by the idea of a career-hungry insurance company exec (Jack Lemmon) advancing up the “Mad Men” ladder by lending his apartment out to superiors for their extra-marital flings. (After, of course, packing his modest digs out with vodka and the right kind of cheese crackers.) Yeah, right: We all know this didn’t happen in the Rat Pack era.

Yet, something happened over the next few months (most likely, commercial acceptance), and by the time spring rolled around, The Apartment won five Oscars — including three to Wilder himself for producing, directing and co-writing with I.A.L. Diamond. Despite Lemmon’s supporting Oscar for 1955’s Mister Roberts, it was Wilder’s Some Like It Hot in 1959 that had “made” the actor, and Wilder knew even during Hot’s production that not only did he want him for this immediate follow-up — and that if he couldn’t get Lemmon and his ingratiating personality as an audience buffer amid an undeniably sordid premise, the picture probably wouldn’t be made. It was genius casting, as was Shirley MacLaine’s as the plot-central elevator girl (as they used to be called), as was Fred MacMurray as the firm’s slimy personnel director, Mr. Sheldrake — albeit in this case, casting that emerged from tragedy.

Paul Douglas, who hadn’t looked too healthy in swan song The Mating Game from ’59, was signed and ready to go in the Sheldrake role before suddenly dropping dead of a heart attack. Though Douglas is a lifelong favorite of mine and had played the brashly crude Harry Brock character on Broadway in Born Yesterday, he was almost always lovable (if gruffly lovable) in the movies, and I can’t recall his ever having played an absolute heel on screen. MacMurray (and his eyebrows) convey the character’s all but transparent dark side at once, and the No. 1 revelation I’ve taken from this recent viewing is just how great MacMurray is here. Though he initially resisted the part due to his then recent Disney association and the launching of TV’s “My Three Sons” (on this week’s episode, dad cheats with a pert employee who eventually tries to kill herself), this is one of MacMurray’s two career performances. Both were for Wilder — the other being his all-timer as the insurance agent who makes the worst sale possible policy sale this side of the one Bob Hope writes up for you-know-who in Alias Jesse James.

Technical credits are pro here, as Variety reviews used to say, with the visual showstopper being the set for Lemmon’s impersonally cavernous work “hangar” — the creation of Children of Paradise’s always-brilliant production designer Alexandre Trauner, who won an Oscar here. These key scenes were in turn heavily influenced by parts of King Vidor’s The Crowd, a silent so brilliantly off-the-charts that you’d naturally expect it to be on DVD or Blu-ray yet one that only enjoyed a laserdisc release back in the Cro-Magnon video era. Meanwhile, versatile (and nominated) cinematographer Joseph LaShelle gives The Apartment an appropriately noir-ish look while doing a flawless job of navigating Lemmon’s just-functional digs (for him and for the work cronies who use it). Adolph Deutsch’s score wasn’t nominated, but this has to be because his main theme was borrowed or swiped from an obscure British film of the ’40s (I’d like to hear the story behind this). Even so, the music and its many moods give both the comedy and drama a huge boost, and the aforementioned theme caught on with the public and made it to Billboard’s No. 10 when Ferrante & Teicher hugely tickled 176 ivories in their tie-in recording.

MGM’s old Blu-ray never struck me as one of the most obvious titles that begged for a revamp, but the clean-up job Arrow has done here re-emphasizes the point that imagery delivered as the filmmaker intended it can go a long, long way toward totally putting over even a screenplay as verbally kinetic as The Apartment’s. (I love it when Oscar-nominated Jack Kruschen, as Lemmon’s doctor neighbor, refers to the younger man’s perceived sexual dalliances with a wide array of women, on certain evenings, as a “twi-night double header.”) Bruce Block, who delivers an outstanding commentary carried over from the previous release, has a visual background — which, when combined with his massive research, makes for a wall-to-wall informative two hours.

This Arrow version also adds a slew of featurettes that include a Wilder archival interview where he speaks extensively and sweetly about Diamond and a sturdy booklet with critical writings more on the ball than some of the original reviews. From what I’ve seen to date, Arrow has become one of those companies whose name on the box means you can go to the bank, and this fresh viewing has, for me, been somewhat of a revelation. And this despite the fact that The Apartment has always been one of my favorite films since seeing it in a summer drive-in double bill the following year with Elmer Gantry — quite a night for a then recent 14-year-old and one that killed Disney Fred MacMurray’s for me forever. Matter of fact, I’d walked across the street to see Some Like It Hot in ’59 immediately after exiting the Fred-Walt original of The Shaggy Dog, and even then, the comparison was one of “Give me a break.”