The Apple TV+ comedy “Ted Lasso” took over the top spot on Parrot Analytics’ digital originals U.S. chart for the first time the week ended Sept. 24. The series had a 6.91% rise in demand expressions, the proprietary metric Parrot uses to gauge a show’s popularity, to give it 42.6 times the demand of an average show. The show, about an American football coach taking over an English soccer club, is wrapping up its second season and won a slew of Emmys at the Sept. 19 ceremony, including Outstanding Comedy Series and three acting trophies. “Ted Lasso” was No. 6 on Parrot’s list of all TV shows.

HBO Max’s “Titans” slipped to No. 2 on the digital originals chart. The superhero series had a 6% drop in demand expressions to give it 42.4 times the demand of an average show. “Titans” was No. 7 on Parrot’s list of all TV shows.

Netflix’s perennially popular “Stranger Things” rose to No. 3 on the digital originals chart with 39.3 times the demand of an average series after a 0.15% drop in demand expressions. “Stranger Things” was No. 9 on Parrot’s list of all TV shows.

Another Netflix series, “Lucifer” slid to No. 4 on the digital originals chart, taking 34.6 times the demand of an average show after a 14% slip in demand expressions.

The Disney+ “Star Wars” series “The Mandalorian” rose a spot to No. 5, with a 2.4% rise in demand expressions to give it 33.3 times the demand of an average series.

A show which had a huge surge in demand of 209% was Sex Education, following the release of its third season on September 17.

The series with the biggest demand surge into the top 10 was Netflix’s “Sex Education,” which rose to No. 7 from No. 83 the previous week. It had 29.1 times average demand and a 210% rise in demand following the debut of its third season Sept. 17.

The No. 1 overall TV series in terms of online demand was “SpongeBob SquarePants,” with 77.1 times average demand. 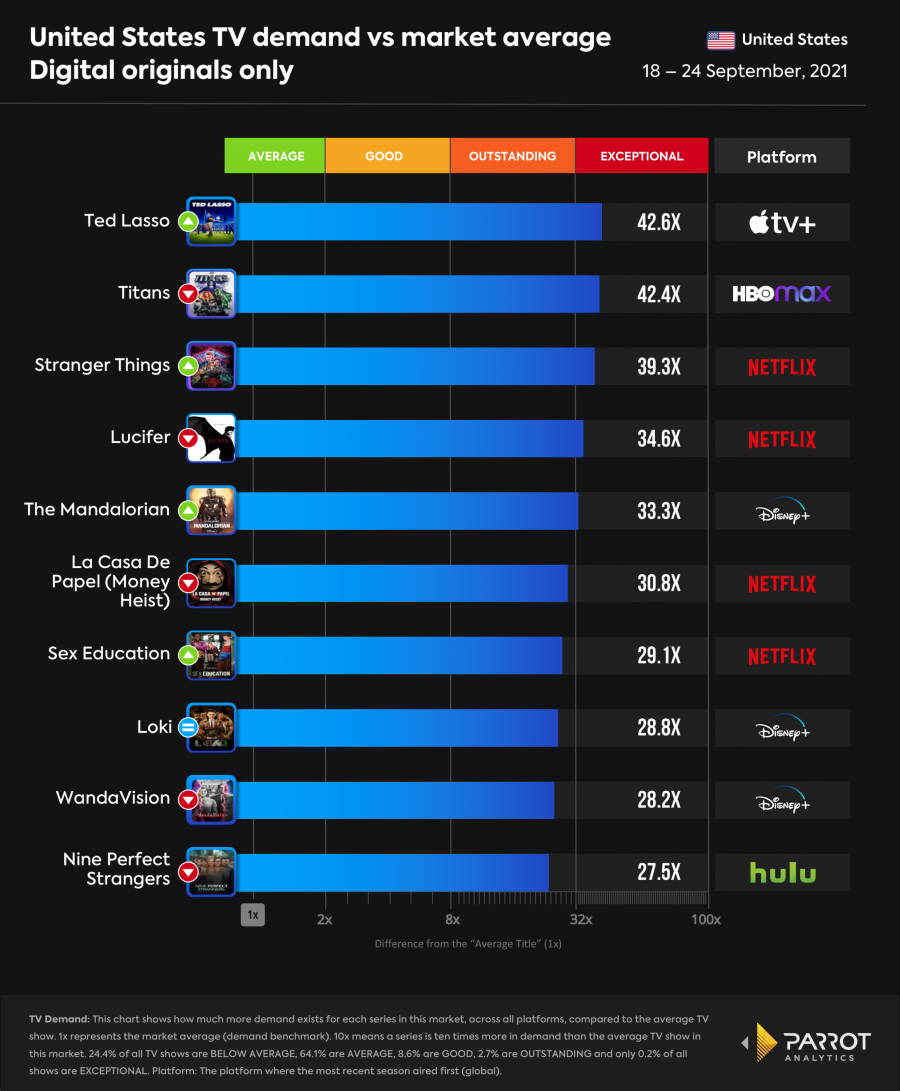