The Emmy-winning Apple TV+ comedy “Ted Lasso” remained No. 1 on Parrot Analytics’ digital originals U.S. chart the week ended Oct. 15. With the final episode of the soccer comedy’s second season released Oct. 8, the series had 41.6 times the demand of an average show, and a 2% rise in demand expressions, the proprietary metric Parrot uses to gauge a show’s popularity. “Ted Lasso” was No. 6 on Parrot’s list of all TV shows.

HBO Max’s “Titans” climbed to No. 2 on the digital originals chart as its third season wraps up. The superhero series had a 2.5% rise in demand expressions to give it 41.2 times the demand of an average show. “Titans” was No. 7 on Parrot’s list of all TV shows.

Netflix’s South Korean import “Squid Game” dropped to No. 3 on the digital originals chart. The survival drama had 40.9 times the average series demand and was up 0.8% in demand expressions. “Squid Game” was No. 8 on Parrot’s list of all TV shows.

Netflix’s perennially popular “Stranger Things” remained No. 4 on the originals chart. The series had a 1.2% rise in demand expressions to give it 38.6 times the demand of an average show. “Stranger Things” was No. 9 on Parrot’s list of all TV shows.

The Disney+ “Star Wars” series “The Mandalorian” stayed No. 5 with 29.6 times average demand and a 6.4% drop in demand expressions.

Hulu’s “Only Murders in the Building,” a mystery series starring Steve Martin, Martin Short and Selena Gomez as a podcasting trio, continues to make a space in the top 10, rising to No. 6 with 28 times average demand and a 3.4% rise in demand expressions.

The No. 1 overall TV series in terms of online demand was “SpongeBob SquarePants,” with 71.2 times average demand. 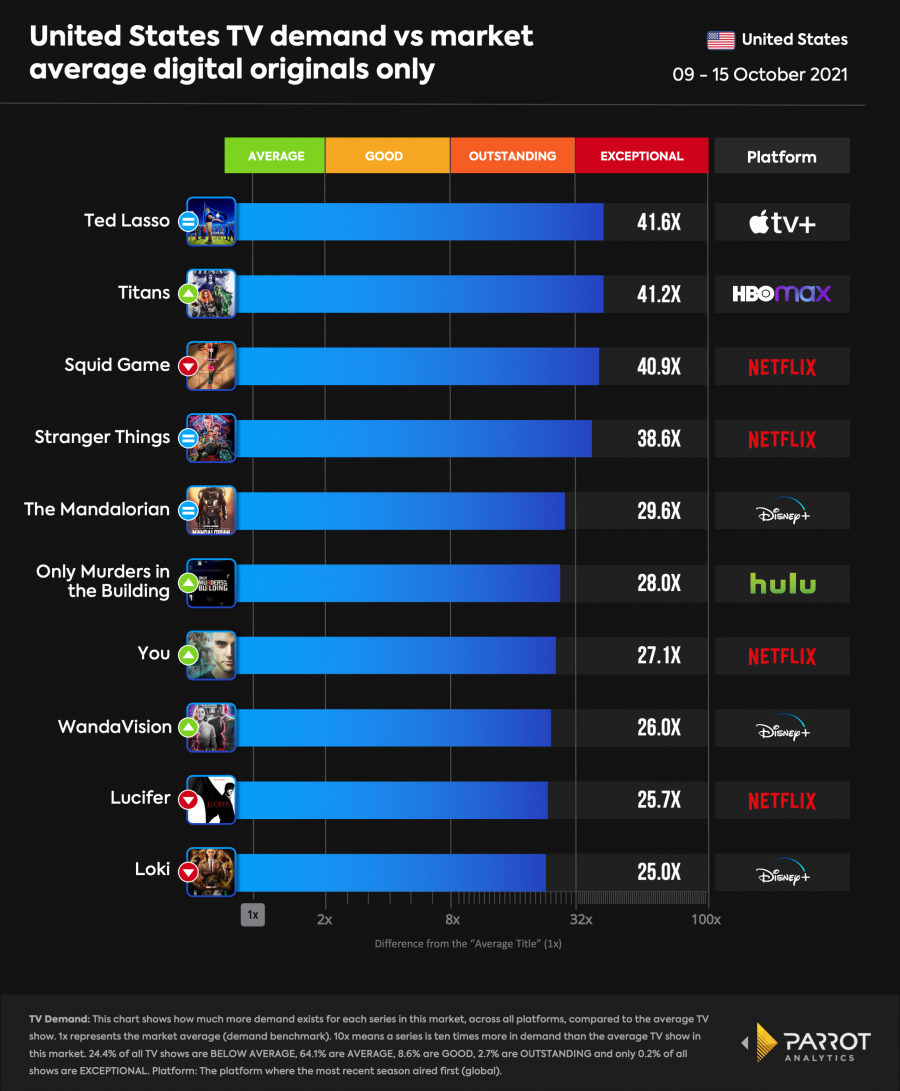