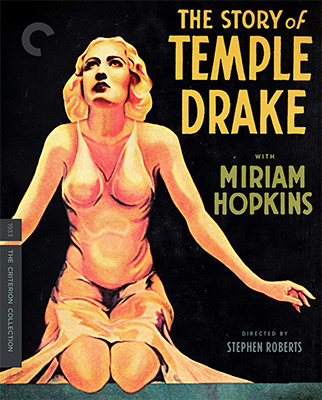 For a movie that came out in 1933, the same year as Larry King and Roman Polanski were born (not to equate those individuals), Paramount’s The Story of Temple Drake remains one of the more obscure Hollywood releases to the masses when it comes to making a list of the ones that caused a scandal in their day. But it was always somewhere in my mind from a very young age because a sizable still photo from it was included in The Movies by Richard Griffith and Arthur Mayer, the only big-item coffee table book on film history I knew of at the time aside from Deems Taylor’s 1943 A Pictorial History of the Movies. My 10-year-old self got the beautiful Griffith-Mayer volume for Christmas right after it was published in late 1957 (I still have a copy in my living room) and Simon & Schuster priced it at $16, which, if you compare then-and-now currency rates, was a lot of money. Thanks, mom and dad.

The photo, which takes up most of a page, pictures Miriam Hopkins (and, already, I liked blondes) looking threatened and compromised clutching bed covering to her scantily-clad self as an imposing duo loomed over her. You could tell from the male member’s appearance, without knowing anything else, that he (Jack La Rue) was not someday going to be asked to be backup host for Jimmie Dodd on “The Mickey Mouse Club.” The movie’s significance in terms of a Griffith-Mayer mention was its role in substantially toughening up Hollywood Production Code (of which I knew nothing of at the time) — one of a handful of movies, I later learned, that did the same: think Warner’s Convention City and the entire Mae West oeuvre. Scandal-wise, it couldn’t have helped that Story was the dampened but not totally watered-down screen version of William Faulkner’s already notorious novel Sanctuary, which proper society had both recoiled at and bought in about equal number.

Hopkins’ version of Temple is the granddaughter of a prosperous judge in what the movies used to like calling “an unnamed Southern town.” He’s one of those hypocrites who supposedly lives by a moral code but pours himself what might still be Prohibition hooch in his judge’s quarters — apparently passable rotgut, it seems, that, for all we know, might have been provided by rural bootleggers who don’t live that far out of town. Much of the client base for their liquid contraband are the college-boy lushes who’d like to get enough booze into Temple to negate her reputation as the town tease. One of these jokers is drinking and driving in an open convertible with her when the all but inevitable road mishap occurs somewhere roundabouts a backwoods Deliverance-ville, with both somehow surviving with minor injuries at worst. The bootleggers take her in, find some convenient hole in which to stash the boyfriend, and the worst ensues in a movie rife with well-delineated class resentment.

This is the famous rape, albeit one far more famous in the book, perpetrated by La Rue’s “Trigger” character, a somewhat more worldly figure than the more sympathetic characters whose ramshackle house he resides in when not operating out of a comparably urban brothel in a near-enough town. In the book’s rape of Temple, the character (named “Popeye”) uses a corncob as a hedge against his impotency. Thus, in the movie, director Stephen Roberts makes certain that the barn’s hay-or-straw mattress in which Temple sleeps is surrounded by corncobs, a sly brainstorm aimed at in-the-know audiences. Roberts showed talent here and in other movies I’ve seen — Geoffrey O’Brien gives a good example of his actor orchestration in Criterion’s accompanying essay — but he died three years later at age 40, so it’s tough to get a bead on him. But there’s no ambiguity about Karl Struss’s cinematography, which suggests something out of a horror classic like the Fredric March Dr. Jekyll and Mr. Hyde, which he’d already shot. I’ll never be able to figure out how Struss (whom I got to meet very late in his life) spent a lot of his late career shooting the likes of Lex Barker Tarzan movies and his penultimate The Alligator People.

The overriding question here is the degree to which Hopkins’ Temple willingly assimilates into this tawdry life, but in any event, she becomes the girlfriend of La Rue’s Trigger and is at his side in the brothel when an up-and-coming lawyer in her town (and a kind of protegé of her grandfather’s) tracks her down and tries to rescue her. Eventually, the movie finds itself on more traditional moral ground, but Hopkins is so good (her characterization suggests one with at least some intelligence atop her naiveté and hopeless judgment) that we’re not really sure what her true feelings are.

In Tony Richardson’s really awful 1961 screen version, titled Sanctuary and adapted from the novel and a Ruth Ford play that was kind of a sequel written with friend Faulkner’s permission, the normally beyond-criticism Lee Remick makes Temple such a ditz that her rather obvious preference for an alternative life doesn’t carry much dramatic weight one way or the other. She might as well be the Dixie airhead Pamela Tiffin plays so supremely for laughs (one of the most underrated performances ever) in Billy Wilder’s same-year One Two Three.

Hopkins, though, makes Temple interesting. On the one hand, life in her hometown does come off as stultifyingly dull for any woman with a little imagination. As for the aforementioned lawyer who’d like to marry, he’s kind of dull, too (William Gargan’s casting doesn’t help), and one can see that she might enjoy rebelling against all this. On the other hand, the always persuasive Imogen Smith is included as well in this Criterion release’s typically imaginative bonus features, and she makes a thoughtful feminist case while acknowledging certain ambiguities. Look at Hopkins in a convertible not long after the act, and you see she appears to be delirious — and it’s not the good kind of delirium. Smith also notes that were Temple to toss all those “tease” accusations to the winds and fully act on possible impulses, she’d be marked forever in a town whose 10-to-a-square-yard biddies already enjoy gossiping about her.

Faulkner’s novel, which I recall as being much more sordid, pulls far fewer punches when it comes to the life Temple chooses to live (it’s been decades since I’ve read it, so I think a fresh leap into the void is a major candidate for my agenda). Even so — and this is The Movies book speaking —“women’s groups” were outraged that Paramount had even made the movie, and, as we know, the industry’s hypocrisy meant that we’d soon be on our way to a Production Code with teeth and a long period of Andy Hardy and his ilk sipping sodas out of their straws (while Mickey Rooney and contemporaries of both sex sexes tallied 876 real-life marriages).

OK, that’s an exaggeration but not that much of one. San Francisco Chronicle film critic Mick LaSalle, whose published works include Complicated Women: Sex and Power in Pre-Code Hollywood, is also a bonus interviewee here, and he advances a theory I like claiming the screen-history anomaly in all this was not pre-Code movies but the rather antiseptic life view the industry put forth that followed for too long a while (notwithstanding all the great films that nonetheless emerged). Rounding out the bonuses are cinematographer/Motion Picture Academy president John Bailey — who joins Matt Severson (head of that organization’s Margaret Herrick Library) to look at the original storyboards, which (again) suggest a horror movie. Bailey, a bonafide student of film history in addition to master of his chosen field is properly amazed. To view these, both he and Severson wear forensic gloves, which suggests the holiness of the moment.

The young Richard Zanuck bought the rights to the novel and this earlier screen version when he took on what became the Lee Remick fiasco (it’s not as if 20th Century-Fox hadn’t been artistically burned by their version of The Sound and the Fury in then recent history). The timing of this purchase was so close to when Paramount sold its 1929-49 library to MCA that just I don’t know if Story would have been withheld in any event from that still astonishing film package for the same raunchy reasons The Miracle of Morgan’s Creek was (which is why Creek is the only Sturges Paramount not controlled today by Universal, who absorbed MCA in 1962). Whatever the reason, both versions were soon pulled out of circulation for many years and never televised until recent times — existing, as they say in A Thousand Clowns, mostly by rumor.

Nonetheless, I (who, again, always had the movie on my mind) was lucky. When I was the black sheep of NYU’s graduate Cinema Studies department, the greatest perk was getting to see movies at the late Prof. William K. Everson’s cavernous West Side apartment, and one night he announced that The Story of Temple Drake was on the evening’s agenda (I think I swallowed my entire top row of teeth). Later, when I was programming and eventually in charge of the AFI Theater, I saw it again each time we managed to clear the rights — perhaps Zanuck himself even signed off on it, can’t recall — for us to run a safety 35mm print the UCLA Film & Television Archive had (thanks again to Bob Rosen, Bob Gitt or anyone else who had a hand). Finally, the film showed up on Turner Classic Movies sometime into this century and at least one of the TCM festivals.

This tally still doesn’t represent a lot of people, so I hope this release will give Faulkner fans the nudge to take a look. Criterion’s gorgeous rendering basically trumpets all those early ’30s Paramount production design/set design/lighting cosmetics that made and make their films incalculably more interesting viewing than their MGM counterparts from the time. There’ve been more good movies made from Faulkner works than many think, with Intruder in the Dust, The Tarnished Angels, Tomorrow and, I’d submit, at least The Long, Hot Summer’s sassy Newman-Woodward bandying as worthwhile endeavors or more). Temple Drake is closer to being in their class than not, snake bitten to be sure by exhibition roadblocks.

Mike’s Picks: ‘The Bad and the Beautiful’ and ‘The Story of Temple Drake’