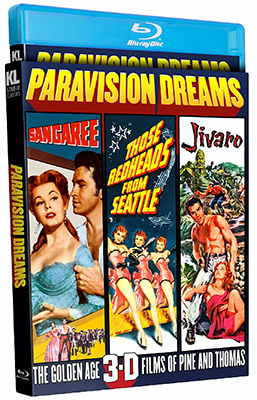 Did the heading of this trio of 3D Blu-ray releases from Kino Lorber provoke a double-take? Don’t worry. It’s not a bad case of anamorphosis. We’re talking depth, not width.

Both the Paravision and Panavision process had been around in 1953, but it wasn’t until 1972 that the latter had supplanted CinemaScope as the industry standard in widescreen cinematography. The trades referred to Paravision as Paramount’s “newly developed process” when in truth it had been around for years.

The camera used to shoot Sangaree (1953) was designed by Paramount’s in-house special effects wizard, and rajah of rear screen projection, Farciot Eduoart. The design won Eduoart a technical Oscar in 1937, but Paramount board chairman Adolph Zukor initially chose not to put the process to use. At the time business was booming and there was no need for gimmickry to lure audiences.

Skip ahead 16 years when television posed a concrete threat to ticket sales and the time had finally arrived to dust off the stereoscopic cameras. No sooner did fledgling 3D productions Bwana Devil and House of Wax begin breaking box office records that Paramount stepped up and became the first major studio to develop its own in-house stereoscopic process, trade name: Paravision.

“I stated that three-dimensional pictures were the next big thing in the industry,” Zukor wrote in his autobiography, “The Public is Never Wrong.“ With 10 days of 2D filming already in the can, Zukor took to the Sangaree soundstage and proceeded to call “cut!” on director Edward Ludwig’s set. “Then we got an old stereo-camera,” he continued, “with which we had been experimenting 15 years ago up from the basement and shot the picture in 3D with Technicolor.” Alas, all of the dye-transfer Technicolor, stereoscopy and advance word combined couldn’t make a box office smash out of Sangaree.

With 73 features and an accumulated box office take of $100 million behind them, Paramount entrusted their 3D unit in the care of the highly productive production duo, William H. Pine and William C. Thomas. Pine, a former head of publicity at Paramount and associate producer under Cecil B. DeMille first teamed with former ‘B’ movie publicity director Thomas in 1940. The duo brought their pictures in on time and under budget. Their motto was, “We don’t want to make million-dollar pictures. We just want to make a million dollars.” Their unbroken string of box office successes prompted the synergetic nickname, the “Dollar Bills.”

Advance word pegged it the best thing to hit screens since Gone With the Wind when in fact another Selznick film comes to mind: Duel in the Swamp. Sangaree opens on a deathbed scene with Gen. Darby (Lester Matthews) bequeathing his titular estate to Dr. Carlos Morales (Fernando Lamas), a friend and the son of an indentured slave. Morales is reluctant to accept the deal, but as the general points out, he can’t entrust a fortune the size of his to his daughter Nancy (Arlene Dahl). After all, she is a girl! Pine-Thomas never got the pick of ‘A’-list players. Originally scripted with Clark Gable and Lana Turner in mind, pricier talent was generally overlooked in favor of more cost-effective contract players.

Dahl and Lamas’ torrid on-set love affair made for prime tabloid kindling. (The two were married to each other from 1954 to 1960.) As an actress, Dahl photographed well while Lamas was handsome to a fault, the fault being his acting process generally entailed removing his shirt. What’s the first thing that comes to mind at the mention of Fernando Lamas? “You look marvelous!” the catchphrase assigned by Billy Crystal for his riotous impression of the actor on “Saturday Night Live.” Enjoy the unintentional laugh when Morales greets Nancy with, “You look fabulous!”

The three movies in the set have been made available in both 2D and 3D versions. Committed to practicing full disclosure, I must confess to not owning a 3D television. Having seen more than my fair share of movies from behind Polarized specs, I feel capable of faking my way through a “flattie.” Set bound and curiously claustrophobic, the camerawork tends to favor lateral movement rather than plumbing the depth of the frame. At the time, the filmmakers did their best to limit the number of cheap “coming at you” effects, moments where tossed objects cause audience members to duck. But is that what the paying public really came to see? Or was it a team of horses bolting at the camera or a casque of wine hurtling towards your lap?

The greatest find on the disc is the 3D coming attraction. Fake headlines flash across the screen ballyhooing cinema’s latest technological marvel. Back in the studio, a Technicolor red curtain parts so that our two leads, dressed for the prom, may greet us by throwing a heap of hype our way. Lamas’ idea of explaining depth perception involves forming an invisible hourglass with his hands while leering at Dahl’s decolletage.

The good news is when viewed in chronological order, the films (and bonus features) improve with time. Of the 81 genre pictures Pine-Thomas produced between 1940 and 1957, Those Redheads From Seattle (1953) was their only musical. Set during the Gold Rush days, the 3D torching of the small-town newspaper that greets us is nothing short of spectacular. Gene Barry, a marked improvement over Lamas, stars as Johnny Kisco, the proprietor of Skagway’s bustling Klondike Club. Vance Edmonds (Frank Wilcox) was the town reformer whose threat to expose a criminal’s dark past left the publisher bullet-riddled and clinging to life. Not aware of his condition, his wife (Agnes Moorehead) packs their henna-locked daughters — Kathie (Rhonda Fleming), Pat (Teresa Brewer making her screen debut), Constance (Cynthia Bell) and Nellie (Kay Bell), the only towheaded sister in the bunch — and carts them to the Yukon just in time for Edmonds to die. To make matters worse, it was Kisco’s partner who triggered Edmonds. Kathy picks up where her father left off writing scathing articles about the Klondike Club. (For a sharper look at a woman-run newspaper picture from this era, check out Sam Fuller’s luminescent Park Row.)

With only five numbers, it barely qualifies as a musical. The tunes are forgettable; the only number that stands out finds Brewer singing before an armed curtain. Barry goes on a Hollywood Bender by mussing up his hair and not shaving for five days. A bartender sliding a beer at the audience in 3D is sublime. That’s more than can be said of the climactic foot chase set against the backdrop of a rear screen projector. What the film does have going for it is a concise, if not a tad overly-technical, audio commentary featuring Bob Furmanek and his merry band of historians over at the 3D Film Archive.

Last, but certainly not least, there’s the faster-paced, bigger-budgeted entertainment of Jivaro. (That’s short for “Amazon headhunters.”) If the action doesn’t hold you, there’s another knockout audio commentary and an enlightening shot by shot “stereoscopic analysis” that’s bound to please even the most discerning viewer. Rhonda Fleming returns to play Alice Parker, a statuesque redhead who drives the pent-up locals loco when she travels deep into the Peruvian jungle in search of her fiancé Jerry Russell (Richard Denning), a career alcoholic on a treasure hunt. Or is he a plantation owner? Lamas, chest exposed, teeth gritted, oils his way into Alice’s heart as the jungle trader who withholds the truth about Jerry’s tippling. As the villain in the piece, the eternally underrated Brian Keith shows the rest of the cast what it means to give a performance. The ease and charm he brings to the lavish Technicolor production far exceeds anything in Lamas’ wheelhouse. It’s a performance that leaves one cheering for the bad guy. Edward Ludwig resumes the director’s chair and the Pine-Thomas reluctance that once eschewed gimmick shots this time hits the audience with everything from bolts of fabric to shrunken heads.

Thanks to the 3D Film Foundation, these films haven’t looked this good since their initial release. It’s a shame that we have to watch them on television.