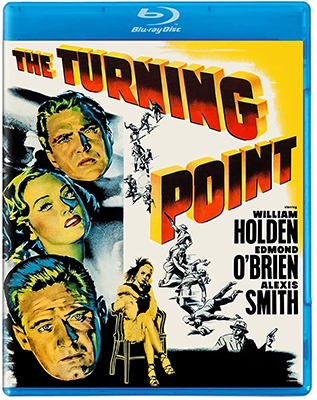 It was a ratings bonanza. With 30 million Americans tuning in to watch the Kefauver Hearings, the Senate investigating committee on organized crime that stretched between 1951 and 1952, it wasn’t long before Hollywood devised a way to get a cut of the viewership. The Turning Point wasn’t the first feature to use the hearings as a springboard to hard-hitting action, but it remains one of the finest.

The credits roll over a police motorcade whisking John Conroy (Edmund O’Brien) from airport to city hall. The law professor has returned to his hometown to head a special investigative team tasked with breaking up a local crime syndicate headed up by Neil Eichelberger (Ed Begley, snarlier than ever). The press knew very little of Conroy’s endeavor other than he’s been endowed with tremendous powers to get the job done. Joining Conroy is girl friday/love interest ​​Amanda Waycross (Alexis Smith). He’s clearly smitten, but if the awkward kisses he planted on her cheek were any indication, their romance is on a dead end course to Nowheresville. Conroy held no political aspirations even though cracking Eichelberger’s syndicate could land him a seat in the Senate.

Enter Jerry McKibbon (William Holden). A cynical reporter assigned to do a color story on his lifelong friend, McKibbon went so far as openly expressing doubt about Conroy being up for the job. He does, however, admire his friend’s taste in secretaries/reformers. McKibbon immediately gave Waycross the onceover and in jig time decided that a dame should stick to the society page, not mussing up her makeup trying to crack a crime wave. He’d soon become the third prong in a love triangle, but luckily the romance never gets in the way of the action. With the exception of Conroy’s surprisingly wimpish acquiescence to being cucked, the film is better off without it.

The men are boyhood friends, so it’s only natural that McKibbon landed an invite to the Conroy family breakfast table, the spot whence the titular juncture began taking on meaning. For all the year’s McKibbon’s known the Conroy’s, this is the first time the crusading reporter had sensed something strange about father Matt (Tom Tully). It’s not that he refused his son’s job offer as chief investigator; McKibbon was in no position to talk seeing how he, too, turned down Conroy’s request to join his team. It was the flustered manner in which Matt declined the offer that seemed so out of character. Following his hunch, McKibbon tailed Matt to Eichelberger’s office, the last spot on Earth one would look for an honest cop. Matt was supplementing his policeman’s salary by keeping the syndicate aware of his son’s every move. Corrupt cops were common in these parts, but listening to Tully tell it, one questioned why he didn’t turn crooked sooner to help pull his family out of debt. His confessional offers Tully one of those moments a character actor works his entire life for. It’s a moment that stands out above all others, a moment to shine and do something extraordinary, a moment Tully took full advantage of.

The characters move through space with a grace and naturalism that can only come from a director with decades worth of experience both in front of and behind the camera. William Dieterle spent most of the 1920s as an actor before making the permanent move behind the director’s chair in 1931. It’s been said that his inability to speak English caused the insecure German emigre to overcompensate through his visuals. That may explain the visual flourish at play in such sparkling pre-code diversions for Warner as Jewel Robbery, The Crash and Grand Slam. He had no problem making a smooth transition from studio exteriors to taking full advantage of his Downtown Los Angeles locations, including a quick cameo by the original Angel’s Flight funicular railway.

Conroy was tougher to take down than Eichelberger had expected, McKibbon even moreso. McKibbon had every intention of writing up the story, but for Conroy’s sake chose to leave Matt out of it. Warren Duff wrote the script based on a story by hardboiled suspense writer, Horace McCoy (They Shoot Horses, Don’t They?; Kiss Tomorrow Goodbye ). When not delivering dialog that crackles like a cinder block being lobbed into a dumpster filled with neon tubes, McKibbon can be found standing silently in the shadows like any good reporter, observing from a distance, rapt in contemplation. He didn’t want Conroy to find out that “his father has been crossing him every day of the calendar.” Eichelberger reacted as any paranoiac would, by putting the world on alert. “Everybody’s under glass from here on out,” he cautioned. With fear in his corner, Eichelberger was going to work it as hard as possible, starting with Matt. Some of the paranoia can’t help but wash up against Conroy who doesn’t like it when his journalist pal scoops him in more ways than one. And one would be right to question the logic behind killing the father of the lawman determined to stop just short of ridding the world of you.

A key witness (Adele Longmire, giving a nail-biter of a performance) provided Conroy with the evidence needed to bring the mob to its knees, but not before Neville Brand is brought on board as the out-of-town enforcer contracted to perform a hit on our zealous crusader. And look for Carolyn Jones making her screen debut as a wise-cracking floozy testifying before the committee. In the end, crime doesn’t pay, and to prove it, one of the characters “has to pay an exorbitant price to uphold the majesty of the law.” It’s unlikely, more than a bit sensational, and certainly not the type of ending one would find on television, which at the time of its release was precisely the point.