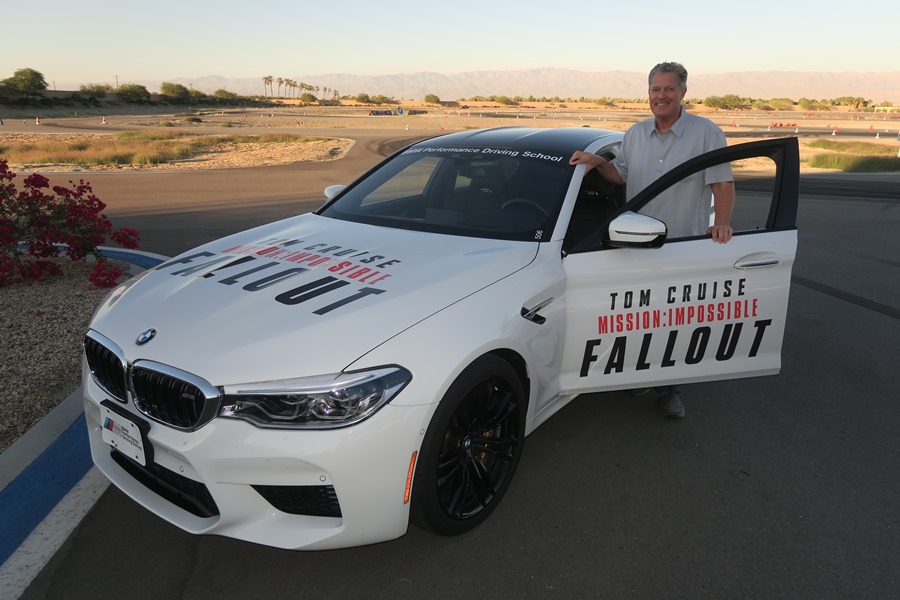 It’s an indescribable feeling, speeding toward a 90-degree curve at 140 miles an hour and knowing that you’re not going to die.

And today, this badass had my life in his hands. We were in a BMW M5, powered by a 4.4-liter twin turbo-charged V8 with 600 horsepower – and capable of going from 0 to 62 mph in 3.4 seconds. And watching that curve race toward me like a major-league fastball made me break out into a sweat and say a silent prayer, just in case. All the while, Eastwood was talking about how smooth the car was to handle, and telling me to brace myself when he hit the brakes seconds before we entered the curve.

Eastwood and I would up taking five laps around the big racetrack at the BMW Performance Driving School in Thermal, California, about 25 miles south of Palm Springs. Paramount Pictures had invited a group of journalists to attend the school, race several cars ourselves, and then ride around the track with Eastwood to promote the home release of Mission: Impossible – Fallout. With a domestic gross of more than $220 million, the action sequel – and sixth installment in the M:I franchise – is the year’s sixth-biggest box office hit.

One of the most talked-about sequences in the film is a motorcycle and car chase through the streets of Paris. Eastwood is the man who made it happen, with Tom Cruise on a motorcycle and driving an E28 BMW M5 while being chased by the police and Rebecca Ferguson’s returning character, Ilsa Foust.

In an interview, Eastwood said his work on Mission: Impossible – Fallout was particularly challenging, because “we pushed the envelope that much more. There was so much pressure after Rogue Nation – what are you going to do to make it even better, because we did so much…. There was a lot of fun stuff.”

Watch the complete interview with Wade Eastwood and Jenny Tinmouth.

It wasn’t just the car scenes in Paris, either. Eastwood – and Cruise – also pulled chopper stunts in New Zealand.

“Tom and I always did a lot of that away from work, like chopper flying and racing, and being able to put that into a movie and at the level that we did it, with Tom doing it, was great,” Eastwood said. “It was just a real experience, to see him flying in the mountains of New Zealand where I learned to fly helicopters, in the same canyons where we were now filming the Mission: Impossible movie. Dropping him from the helicopter into the net, that was a major stunt to do, practically – with no CG, a couple of thousand feet in the air, and dropping Tom for real down that line…. There are so many moments in that film that make that my favorite.”

Cruise is always game, Eastwood said. “Working it out is fun, being challenged, like how the hell am I going to drop him and use this much rope while the helicopter is flying … how am I going to fit two riggers and myself into the helicopter while it’s flying and have Tom drop … all those logistics make it a great challenge, and being able to do it in that beautiful location…. Being able to pull it off is hugely rewarding, when you put that much work into it, and without Tom we couldn’t have done it, we couldn’t have had that subjective experience…. We’re not cutting to a stunt double, we’re not coming around with that type of shot and having to morph … it’s all Tom, and the camera angle allows you to do so much more. The camera stays with him, and audiences are so much smarter these days, they know when they are being cheated so they’re just waiting for that stitch and there isn’t one – it’s all Tom.”