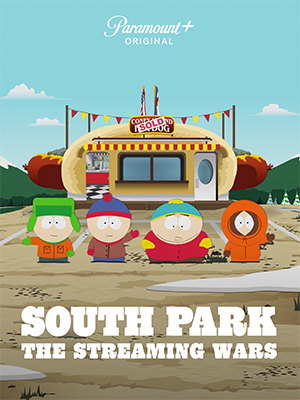 This latest pair of “South Park” specials brings to bear many of its ongoing story threads and characters in a precision take-down of the economics of the modern entertainment ecosystem.

In particular, series creators Trey Parker and Matt Stone hit upon a metaphor so obvious that it’s impossible not to understand exactly what their message is: There are so many streaming services that the need for quantity is destroying quality.

But that’s just the meta-humor that’s baked into “South Park.” The story, dialogue and characters are still outrageously funny on their own merits. For instance, Cartman’s mom refuses to get fake breast implants to attract a rich husband, so out of spite Cartman gets the implants himself.

Even this bizarre-sounding subplot still manages to tie into the main story, which has always been the genius of this franchise. Referring to “South Park” as a franchise instead of just a series is now a necessity for reasons we’ll get into later that speak to why these “Streaming Wars” specials even exist.

The story involves a drought hitting the town of South Park, caused by Matt and Trey’s physical representation of climate change, ManBearPig. Distribution of the remaining water is given priority to agriculture, which benefits rival pot farmers Randy Marsh and Steve Black, who decide to sell some of their water back to the town on a subscription basis. Their scheme is legal so long as they can prove water from their farm reaches the city’s reservoir, so they hire the local kids to build paper boats as the content to float down the stream. As the idea of subscription streaming becomes more popular, the same group of kids is hired again and again to build boats for all of them, thus leading to their boats competing with themselves, though the money is too much to pass up.

Later, when the scheme collapses, they are asked why they didn’t give the money back to the other streamers once they agreed to a bigger deal from another.

This is, of course, nearly a direct reference to Matt and Trey’s own experience with streaming services of the digital kind. HBO Max paid $500 million for the rights to the “South Park” episode catalog as well as next-day availability of episodes from the next few seasons after they air on Comedy Central. “South Park” is a prime commodity in the Paramount stable, but this deal was made before the various entities that can now be lumped under the Paramount moniker knew what they were doing with streaming, more interested in the quick cash of selling its catalog than cashing in with its own streaming service.

So, when Paramount finally had its own streaming service, it didn’t even have streaming rights to many of its lucrative properties.

With HBO Max reaping the benefits of the “South Park” pandemic specials, Paramount sought a way back into the “South Park” streaming game, paying $900 million for a series of “South Park” movies that wouldn’t count as part of the seasons, thus providing an end-around to the HBO Max deal.

And Matt and Trey found themselves creating the same content for rival streaming services, essentially competing against themselves, just like the kids in the movie.

That these “movies” are less than an hour long, essentially the same as two episodes or the specials HBO Max was getting, only hammers home the absurdity of the deals, assuming Matt and Trey aren’t just making regular two-hour movies and chopping them in half to meet their obligations to the number of total movies they have to make by using less content to do so.

Both parts of “Streaming Wars” are the third of fourth of these movies, following the two halves of “Post COVID.” That all the specials and movies and new episodes continue to push the same storylines across multiple streaming services only adds to the confusion.

The second part of “Streaming Wars” delves into a conspiracy involving PiPi’s Water Park and its urine-drenched attractions controlling all the water, representing the endgame of the same people making the same type of stuff for multiple streaming services to just compete against each other with it. This installment is also pretty vicious toward celebrities selling out to endorse anything, particularly crypto currency.

It also brings Randy’s seasons-long story arcs full circle as “South Park” pokes fun at itself for giving him such outlandish adventures.

In any event, “South Park” in all its forms remains as biting as it did when it premiered 25 years ago, and proves it still has plenty to say, which bodes well for future installments to appear on whichever streaming service Matt and Trey want to honor their contract for next.