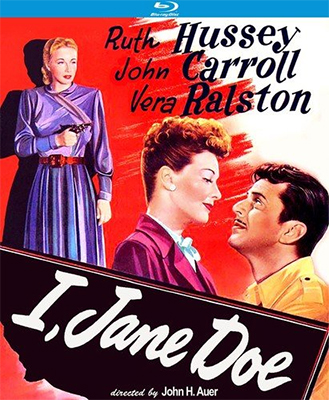 Even by the standards of shaky ‘A’-picture melodramas, Republic Pictures’ I, Jane Doe is a whopper packed with wall-to-wall coincidences and improbabilities right up to its final courtroom histrionics — though I’m happy, of course, that that imposing eagle Republic employed as its studio logo from the mid-1940s on is finally getting some respect. Or at least more of it than was paid to Donald Trump by the creature’s flapping grandson (well, a guy can hope) in that now famous ambush/attack that was videotaped near Trump’s office desk. As gifts go, it keeps on giving as much as the early “money” scene in The Vikings that featured Kirk, Tony and a falcon who knew how to take direction.

What’s more, this is respect isn’t limited to Kino Classics’ recent physically spiffed-up versions — 1948’s Jane gets a 4K scan here — of selections from a library so unusual that there was a time when Orson Welles (with Macbeth) and Republic regular Rod Cameron were probably on the lot at around the same time. There’s also a two-part series programmed at MoMA this year: Martin Scorsese Presents Republic Rediscovered: New Restorations from Paramount Pictures. That’s the kind of imprimatur that can take your mind off the fact that you’re still watching Vera Ralston, be it in black-and-white Jane or even the Trucolor and Naturama of Accused of Murder. (Both films made the MoMA cut.)

So just to clarify — because I want to work in a cheap, campy radio aside — Vera has Jane’s title role, but Rod isn’t even in this particular picture. This said, the two did hang on long enough to costar in non-MoMA picks Spoilers of the Forest and The Man Who Died Twice not long before Republic went under in the late ’50s due to TV competition but also from what you have to believe was a major assist from marital nepotism. The latter had to do with studio chief Herbert Yates’ incessant casting of Ralston, the onetime Czech ice skater he eventually married, in movie after movie that failed to ignite any fires — and certainly none like the one on the poster art for Spoilers of the Forest. As for Cameron, the studio’s now past-tense resident hunk was soon doing audio airwaves spots for four-way cold tablets where, if memory serves, some movie-set kid with a clapboard is suffering from 1948-Berlin-type roadblocks all through his sinus cavities, until Rod — or “Mr. Cameron” — sends him to the right shelf at the drugstore.

But let’s get back to Jane. If lots of awful things happen here not just to Ralston but to Ruth Hussey (who plays her lawyer), we’re at least looking at a product of happier career times. Ralston may have aged fast in real life, but she’s quite pretty here, and there several times when Jane director John H. Auer has her staring silently out the window or at something else, which means that her heavy accent doesn’t keep killing the mood, which was usually her standard day at the office. Scorsese has said in the past that he’s a fan of Auer, and certainly 1953’s City That Never Sleeps (in MoMA’s series and a past Olive Films Blu-ray) is one its era’s oddest balls. I also like how Auer managed to shoehorn Phil Harris into performing his No. 1 Billboard novelty hit of “The Thing” into a military hospital scene during the Ralston-Wendell Corey starrer The Wild Biue Yonder.

That bit required a straight face, which Auer employs here as well in service of a screenplay by frequent collaborator Lawrence Kimble that presents a minefield of spoilers (and not of the forest). So, let’s see: How much can I divulge? Well, we open with Jane/Ralston fatally shooting a mustached philanderer (the worst kind) played by John Carroll, an actor who had a few gigs at MGM while Clark Gable was in the war but never quite caught on as a substitute, though he was passably agreeable. When arrested, Ralston won’t give her name (hence, the movie’s title), which makes you wonder about the quality of the local metropolitan press when no one can uncover the answer to this for at least a third of the picture. Defending her in court, which requires coming out of retirement, is the victim’s widow (Hussey) — a situation that I would think might raise ethical issues, but never you mind. This is, after all, the kind of movie where, when its creators have to come up with a way to delay a prison execution, a hospital gets hit with some sort of plague.

Given that Carroll gets plugged immediately despite being second-billed, it’s a fair guess that flashbacks are going to be employed. So for a long subsequent stretch, we’re looking at a demographics-happy hybrid: the smooshing of a kind of dollar-store Warner Bros. “woman’s picture” (say, The Great Lie) with a long overseas wartime romance involving Carroll — complete with Nazis, a farm house hideout and the sight of an enemy pilot taking a barrage of hot lead in the face (a stock shot, I’m reasonably sure, from the John Wayne/Republic Flying Tigers, a movie that arguably and coincidentally gave Carroll his career role as well). Matters maintain escalating wildness right up to the end, and in ways that have us marveling at how much can be stocked in one kitchen sink. Gene Lockhart, a frequent specialist in playing grumps, frequently voices these very sentiments in court as the dyspeptic opposing attorney, and it’s hard not cheering him on, even though our sentiments are supposed to be elsewhere.

Jane isn’t the first movie I’d put in a legal brief extolling Republic, but the ‘B’-studio that sometimes had surprisingly lofty ambitions was loved by many for members of a large stock company that showed up like old buds in countless releases, outstanding special effects (the Lydecker brothers) and frequent Victor Young scores. It’s true that a lot of the studio’s most ambitious projects— Johnny Guitar, The Red Pony and a ton of John Waynes, including The Quiet Man and Sands of Iwo Jima — have already been creamed off for Blu-ray distribution by Olive Films. But getting into long ignored nooks and crannies, Kino Classics has recently done well with really handsome renderings of a couple end-of-the-trail Roy Rogers Westerns, and were it not for the almost lush Trucolor transfer of Twilight in the Sierras, I don’t think I’d have noticed that there was a cigarette machine in one cantina sequence.

I’m happy to see that Kino has A Man Alone (from the MoMA series; starring and directed by Ray Milland) in the kitty for future release because it’s a taut well-cast Western (Mary Murphy, Ward Bond, Raymond Burr) that I always watched whenever it showed on TV when I was a kid. So far un-announced but also in the MoMA lineup are a couple more with which I also have long histories: Fair Wind to Java, which Ralston thought her best picture — and I guess it was — plus the rural family drama Come Next Spring, which is not just one of the all-time sleepers but good enough to get Criterion consideration, as Frank Borzage’s Republic Moonrise recently did. Actually, I think Spring is the better picture.

Getting back to the Republic story, the studio’s last theatrical release was 1959’s Plunderer of Painted Flats … with John Carroll. Also Corinne Calvet. Also Bea Benadaret, later of TV’s “Petticoat Junction.” Also Joe Besser, for that patented Joe Besser Western action. And getting back to Jane, I was tickled by one scene with an amusingly tarted-up Adele Mara, an actress I always thought was cute and one with an interesting resumé. She sang and danced at 15 with Xavier Cugat, which presumably taught her how to sprint. She supposedly taught John Wayne how to jitterbug for Republic’s The Fighting Seabees (a scene I’ve always remembered because you just don’t get that everyday). And she eventually married Roy Huggins, who was a major player with smash TV series from “Cheyenne” to “Maverick” to “The Virginian” to “The Fugitive,” which presumably provided her with a household stipend larger than a lot of Republic budgets.