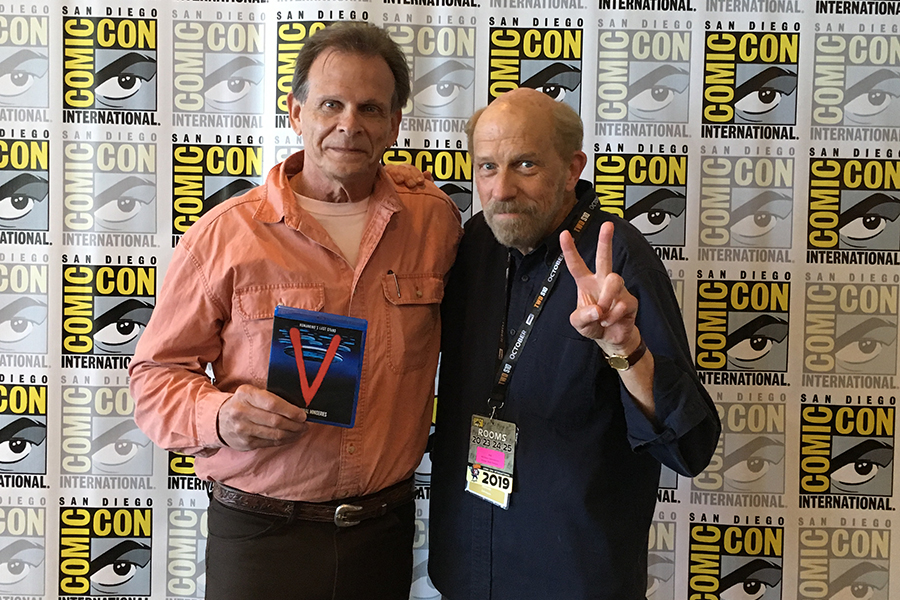 The 1983 miniseries V is fondly remembered as a landmark of science-fiction television.

Consisting of two 90-minute parts, V tells the story of aliens arriving on Earth offering technological advancement in exchange for help to create the chemicals they need to survive. The governments of Earth agree to the alliance, though as the aliens gain power and influence, a resistance emerges as the visitors’ motives are discovered to be more sinister, and that the aliens are in fact reptilian creatures who seek to steal Earth’s water and use mankind for food.

Creator Kenneth Johnson was inspired by Sinclair Lewis’ 1935 novel It Can’t Happen Here, a satirical story about the rise of European-style fascism in the United States. To make his script more marketable for NBC, Johnson made it a sci-fi parable with seemingly friendly aliens as stand-ins for modern Nazis.

“V is a timeless tale,” Johnson said. “It’s Spartacus and the revolt of the slaves. It’s the American Revolution, or the fight against apartheid, or the struggle wherever people are oppressed.”

Actor Marc Singer, who plays journalist Mike Donovan, a key figure in discovering the true nature of the aliens, said V has resonated with audiences because it tells a classic story.

“There are a lot of things that conspired to make V relevant again over the generations,” Singer said. “But I think the basic reason is that it’s an adventure story of daring-do. Everyone loves to see a hero beating the bad guys. But more importantly, it draws together a community and celebrates the entire world we inhabit. There’s a lot of power in the message that we’re all in this together.” 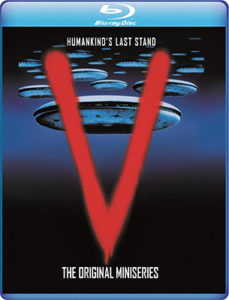 Warner Archive will release V: The Original Miniseries on Blu-ray Aug. 27, and Singer and Johnson were on hand at San Diego Comic-Con International July 19 to reflect on the franchise’s legacy and future.

The miniseries will be presented on Blu-ray in a 1.85:1 widescreen aspect ratio, instead of the 1980s-standard 4:3 television ratio. Johnson recalled his pilot for “The Incredible Hulk” in 1977 being released theatrically in foreign markets, so he said V was filmed with the idea of a potential theatrical release in mind. Edges of the frame were protected so as not to reveal microphones or other production equipment. This allowed the restoration team at Warner Archive to use the wider aspect ratio.

He also enjoyed getting a chance to give the miniseries a more robust home entertainment soundtrack.

“When they released it on DVD, it had mono sound because Warner wouldn’t let me mix it in stereo,” Johnson said. “I spent twice as much time doing the sound for this Blu-ray to get it right.”

Singer said V fulfilled the desire he had as a kid watching Westerns to be a television hero.

“When I first read the script, the immediate reaction was the writing was terrific and the story was terrific. It was almost as if it was meant to be for me to be in it.”

Singer said he was cast because Johnson had seen him perform a stage production of The Taming of the Shrew, as well as his starring role in the 1982 action-fantasy film The Beastmaster.

Singer said his background in Shakespeare offers a valuable lesson to storytellers.

“Every actor and every writer should start off with Shakespeare, period,” Singer said. “The architecture of his writing was almost legalistic. Every word is like a contract, defining who a character is, and they do not not step out of that identity.”

“Sci-fi applies some of the same architectural tenets to that,” Singer said.

Johnson was not involved in the 1984 sequel miniseries V: The Final Battle or the subsequent series that ran until 1985. He was also not involved with the 2009 rebooted version of the show.

“Where sequels tend to go wrong is they change too much of what works, and lose the connection with the audience,” Johnson said. “If it’s not broken, don’t fix it.”

Instead, Johnson is working on his own remake of V with a new movie.

Johnson said the original V was an ambitious project for its time considering the number of visual effects involved.

“When I came up with the idea of a woman swallowing a guinea pig, someone from the production team asked if I can get an actress to do that,” Johnson joked. “We were so hamstrung in those days. But a few weeks ago I was able to attend a retrospective on the visual effects of the original Star Wars, and how things had changed by the time of Rogue One. And I realized they were just as hamstrung on Star Wars the same way I was.”

Johnson said Star Wars actually had it easier than him because their spaceships mostly could be layered over the blackness of space without having to worry about the matte lines.

“It’s a lot different when you try to tae a spacecraft and put it in a sunny wide shot of L.A.,” Johnson said.

Johnson said today’s visual effects resources would be put to full use on the V remake.

“Now I can make the inside of the mothership look like gangbusters,” Johnson said.