Despite being the world’s most-mature market, subscription streaming video-on-demand revenue in the United States is projected to grow by $14 billion, from $43 billion in 2021 to a peak of $56 billion in 2024, according to data analysis by Digital TV Research. Thereafter, revenue growth will be nearly flat from 2024 to 2027 due to price competition and lower ARPUs (average revenue per user) from Netflix’s pending ad-supported subscription tier.

Netflix is projected to have 63 million U.S. subscribers by 2027 — down by 4 million from 2021. Hulu, Disney+, HBO Max and Paramount+ should each claim from 40 million to 50 million subs by 2027. Some consolidation — mergers and closures — is likely, according to analyst Simon Murray.

“Netflix will remain the SVOD revenue winner,” he said in a statement.  “However, the platform will lose $1.4 billion in SVOD revenue between 2022 and 2027 due to lower ARPUs from 2023. Netflix will more than recoup these subscription revenue losses with advertising sales.” 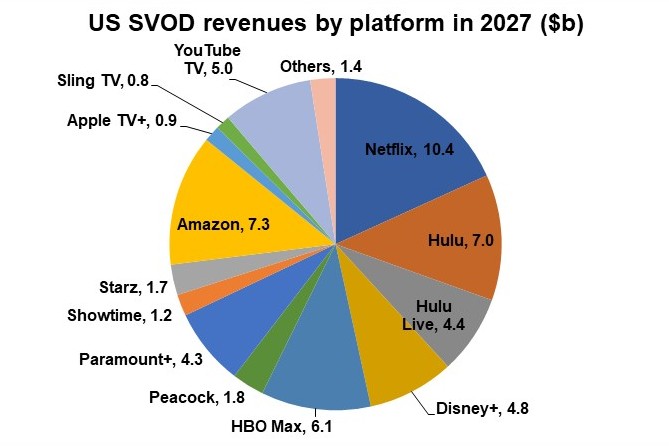