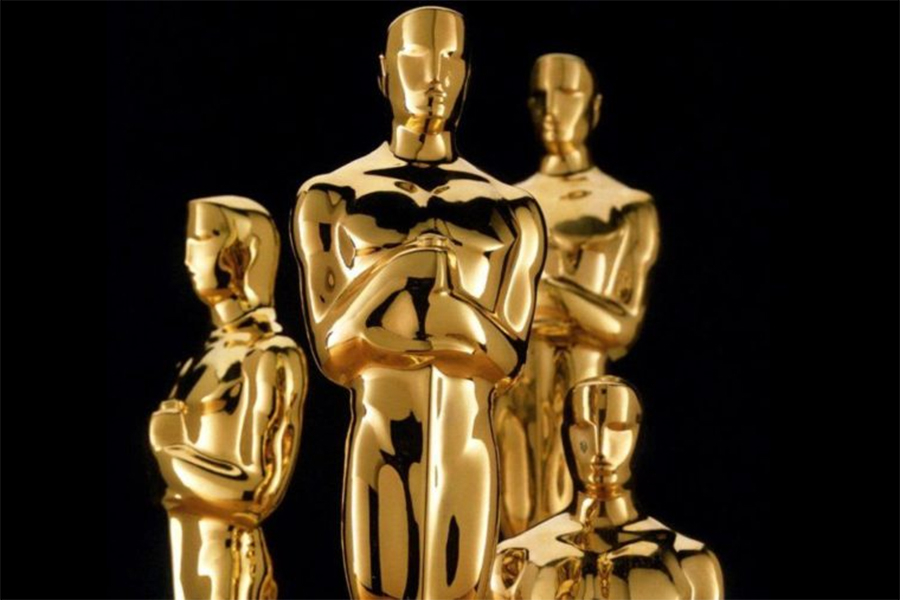 The Academy of Motion Picture Arts and Sciences April 28 announced that, as a result of the coronavirus pandemic, it is waiving the requirement that films screen in theaters to be eligible for Oscars consideration at the 93rd Academy Awards.

Typically, films are required to be shown in a commercial motion picture theater in Los Angeles County for at least seven consecutive days, with at least three screenings per day, to qualify for Oscars consideration. However, due to the coronavirus all L.A. theaters have been shut down since March. As a result, the Academy declared that films intended for a theatrical run that instead debuted on a streaming platform or VOD service would still be considered for nomination in the Best Picture, general entry and specialty categories for the 93rd Academy Awards to be held Feb. 28, 2021.

The special dispensation will apply to this awards year only, according to the rules approved by the Academy’s Board of Governors, and only while theaters remain closed.

The film must still be made available on the secure Academy Screening Room member-only streaming site within 60 days of the film’s streaming or VOD release, and the film must meet all other eligibility requirements.

This is good news for films such as Universal’s Trolls World Tour and Warner’s Scoob!, which skipped theatrical runs in favor of a direct-to-VOD premiere, but can now still be considered for awards such as Best Animated Feature.

The Academy further specified that the exemption would be removed once theaters reopen in accordance with government-approved guidelines, at which point standard theatrical qualifications would again apply.

As such, with theaters looking to re-open by the end of summer, Netflix would still need to stage a token theatrical run for its year-end original movies to qualify them for the awards.

“The Academy firmly believes there is no greater way to experience the magic of movies than to see them in a theater. Our commitment to that is unchanged and unwavering,” Academy president David Rubin and CEO Dawn Hudson said in a statement. “Nonetheless, the historically tragic COVID-19 pandemic necessitates this temporary exception to our awards eligibility rules. The Academy supports our members and colleagues during this time of uncertainty.  We recognize the importance of their work being seen and also celebrated, especially now, when audiences appreciate movies more than ever.”

For films to more easily meet theatrical exhibition requirements when theaters reopen, the Academy will expand the number of qualifying theaters beyond Los Angeles County to include venues in additional U.S. metropolitan areas, including New York City, Chicago, Miami, Atlanta and the San Francisco Bay Area.

Film festivals that have been impacted by the pandemic may provide films online through either a transactional pay wall or password-protected entry, which will not affect the films’ eligibility for future Academy Awards qualification. The Academy will allow an exemption for those films that are released online through an impacted festival’s online platform, provided that proof of inclusion in the festival is submitted.  With these provisions, films will be expected to comply with all other eligibility requirements for the 93rd Academy Awards.

The Board of Governors also announced rules changes in the Sound, Music and International Feature Film categories. The separate Sound Mixing and Sound Editing will be combined into a single Achievement in Sound award going forward; music scores must comprise a minimum of 60% original music, with sequels and franchise films requiring 80% originality; and all eligible Academy members will now be invited to participate in the preliminary round of voting for Best International Feature Film.

In addition, the Academy announced that the 93rd Awards season will be the final year DVD screeners will be distributed. Citing environmental concerns, the Academy will mandate digital screeners for 2021 films and beyond, covering the 94th Academy Awards and after. The distribution of physical music CDs, screenplays and hardcopy mailings, including but not limited to paper invites and screening schedules, also will be discontinued.

Universal Pictures reportedly has generated almost $100 million in revenue from the animated movie Trolls World Tour since its April 10 release on premium VOD for $19.99.

Universal Pictures sources later confirmed both figures to Media Play News — and noted that they are domestic (United States and Canada) only. The film will be released theatrically in most international markets in the fall.

“The results from Trolls World Tour have exceeded our expectations and demonstrated the viability of PVOD,” NBCUniversal CEO Jeff Shell told The Wall Street Journal. “As soon as theaters reopen, we expect to release movies on both formats.”

Trolls World Tour, the sequel to Trolls, was originally intended to premiere in movie theaters April 10.

But with movie theaters shuttered in the wake of the March 11 declaration by the World Health Organization (WHO) of a global coronavirus pandemic, the film instead was released directly to premium VOD at a $19.99 rental price for 48 hours.

The film was also released to about 25 drive-in movie theaters on that same day, a Universal Pictures spokesperson told Media Play News — where it reportedly generated another $100,000 in total revenue.

The sequel, featuring the voices of Anna Kendrick, Justin Timberlake, Rachel Bloom, James Cordon and Kelly Clarkson, among others, was widely seen as a test case for PVOD.

Richard Greenfield, co-founder/analyst with Lightshed Partners, discussed the move to digital delivery on CNBC’s “Squawk Box” April 9, the day before the film’s release.

“It’s a pretty monumental day in the film industry where a mainstream consumer movie in Trolls is going to skip the theaters,” he said. “I give [NBCUniversal CEO] Jeff Shell and the team at Universal Pictures a lot of credit for being willing to try this. It’s a unique circumstance. A lot of the marketing dollars had already been set in motion for Trolls, but you got kids stuck at home, families stuck at home — $20 for Trolls, direct-to-consumer … is really interesting. I’m certainly rooting for them to do well because I think this is an important model for the industry.”

The novel coronavirus pandemic has given movie studios a taste of something they’ve always wanted: premium video-on-demand, or PVOD.

Long talked about as the antidote to shrinking film profits, PVOD allows consumers to watch big movies at home on the same day as their theatrical release — at a premium price, of course. Three years ago, a Morgan Stanley Research report looked at the viability of PVOD and found “significant upside for film studios,” according to the report’s lead author, Benjamin Swinburne. Swinburne and his team estimated that PVOD could boost studios revenues by as much as $2 billion a year, with hardly any extra costs.

PVOD talk died down a short time later when theater owners made it perfectly clear they were not on board.

Then came the pandemic. All of a sudden, the country was effectively shut down. The big movie theater chains at first said they would remain open, but sell fewer seats to maintain social distancing. But within days, both AMC and Regal Cinemas, the No. 1 and No. 2 theater chains, went dark.

Productions were halted and, for films already in the can, premieres were canceled and theatrical openings delayed. On March 16, Universal Pictures announced its current theatrical slate would be available for home viewing at a premium rental rate of $19.99 — and that it would release DreamWorks Animation’s Trolls World Tour digitally on the same day as its scheduled theatrical debut, also at $19.99.

Other studios quickly followed suit, smashing the traditional 90-day theatrical window with a wide range of movies — including Disney’s Onward, which was released digitally on March 20, two weeks after its theatrical opening, and Sony Pictures’ Bloodshot, released to home audiences just 11 days after its box office debut.

But now that studios have gotten a taste of PVOD, they have been conspicuously silent about its success — and about its future.

That’s because studios need movie theaters as much as theaters need Hollywood movies. Simply put, one cannot survive without the other — which is why studios are treading carefully with PVOD. As the Morgan Stanley study found, there’s a significant upside to releasing movies early through digital channels. But $2 billion is a fraction of the estimated $22.5 billion studios earned globally from theatrical ticket sales.

Regardless of how well studios do with PVOD during the pandemic, once theaters reopen the genie will be put back into the bottle — with PVOD’s ultimate fate still dependent on theater owners, whose opposition to PVOD stems in large part to the fact that they derive 40% of their profits from concessions.

Studios, however, will have a little more leverage when the crisis is over. In a survey of 1,000 U.S. consumers, Performance Research found that 49% of respondents said it would take “a few months” to “possibly never” for them to return to movie theaters, while just 15% said they intend to frequent movie theaters more often after the pandemic is over. As Variety observed, “the net effect suggests an alarming erosion of theatrical returns that exhibitors and studios alike can ill afford.” 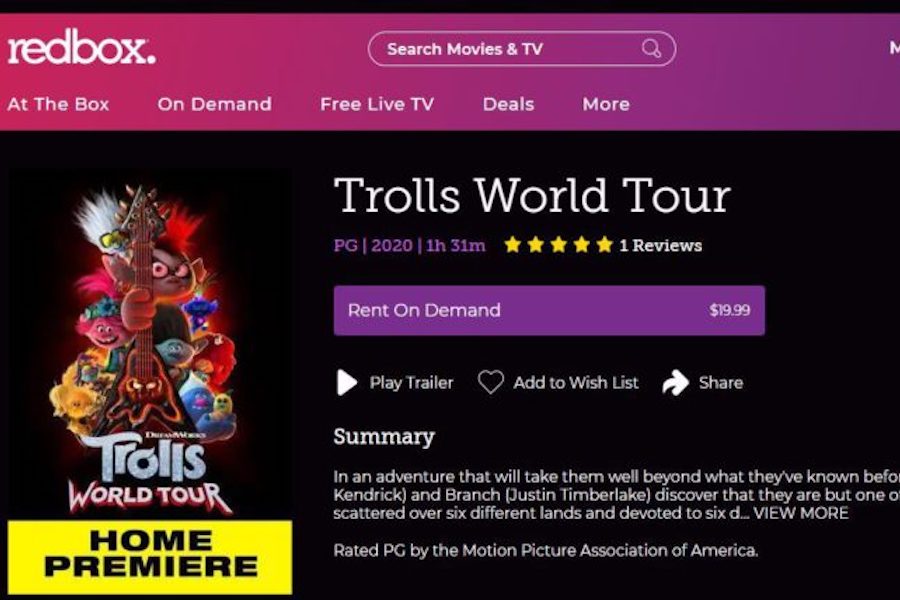 Universal Pictures/DreamWorks Animation’s groundbreaking PVOD release of Trolls World Tour topped digital charts, including No. 1 on iTunes, Amazon Video and Redbox On Demand, among others (through April 12), following its April 10 launch. Financial results have not been released.

The sequel to the 2016 original Trolls movie was released on PVOD for $19.99 on the same day it had been scheduled to debut in theaters prior to the coronavirus pandemic.

With movie theaters shuttered globally to reduce the spread of the virus, studios have either postponed launch dates for tentpole titles or expedited a movie’s retail distribution, including Universal’s The Invisible Man, Paramount Pictures’ Sonic the Hedgehog and Sony Pictures’ Bloodshot, among others.

Disney has said it would debut Artemis Fowl on its branded subscription streaming video platform — the first of several other undisclosed titles.

“The measures being taken right now are because of the unforeseen circumstances,” Paul Dergarabedian, senior media analyst with Comscore, told Business Insider. “And consumers have an appetite for new content. We are literally stuck at home.”

Michael Pachter, media analyst with Wedbush Securities in Los Angeles, doubts PVOD has much of a long-term shelf life. He says studios cannot recoup production/marketing costs of big-budget movies for $20 to households.

“One off and unsustainable,” Pachter said in an email. “We have been trained to wait for $5.99 digital rental. [Studios] will scrap the idea once the pandemic is behind us.”